On the Occasion of the Visit of Pope Francis

Nowadays many questions surround the coming visit of Pope Francis to Japan.

What will Pope Francis say publicly in Japan? His visit will be brief, and he is known to be a free and compassionate religious leader. His words weigh heavily around the world.

Whom will the Pope meet while in Japan? He is the head of Vatican City and the representative religious leader of the Catholic Church and the people he will meet, even briefly—like young people, a migrant or refugee, a prisoner—as he is accustomed to doing in other countries, will have a strong symbolic meaning.

Where will he go? His official schedule is already fixed, but in many other different situations he went also to visit Rohingya refugees or the homeless.

Changes in established Structures of the Catholic Church and Pope Francis
I would like to focus here on something important, but little known in Japan, even in our Catholic Church. It is something that shows the merciful attitude and true affection of the Pope toward people socially rejected by society.

Following on the aggiornamento in many sectors of the Catholic Church after Vatican II, Pope Francis strongly believes that the Church needs continuous renewal and needs to make important changes in order to better proclaim the saving message of Christ to our modern world. The many structural social changes of today’s world challenge the Church, too, to be faithful to the mission given by Christ.

A special commission of 9 Cardinals together with the Pope is already at work to renew the established global structures of the Church, in order to adapt them to the new world situations.

One section of the Dicastery deals specifically with issues concerning migrants, refugees, and victims of slave trade human trafficking, giving necessary attention to issues pertaining to the needs of those who are forced to abandon their countries or those who are without one. The Pope announced that “temporarily” he would personally direct the special Section for Migrants and Refugees as a part of the Dicastery. He named the Canadian Jesuit Fr. Michael Czerny (recently created cardinal) and the Italian Scalabrinian Fr. Fabio Baggio to serve as undersecretaries for issues related to refugees and migrants.

As its name shows, the Dicastery for Human Development works for the promotion of integral human development in the light of the Gospel and in the tradition of the Church’s social teachings
The title of the new Dicastery is significant. The term ‘human development’ is familiar from Pope Saint Paul VI’s 1967 encyclical Populorum Progressio, which opens with the words:

The progressive development of peoples is an object of deep interest and concern to the Church. This is particularly true in the case of those peoples who are trying to escape the ravages of hunger, poverty, endemic disease, and ignorance; of those who are seeking a larger share in the benefits of civilization and a more active improvement of their human qualities; of those who are consciously striving for fuller growth.

The term “integral’ development” is also key to Populorum Progressio (which in the English translation is rendered “complete” or “well- rounded”). This term makes it clear that development cannot be restricted or reduced to economic and material growth but “must foster the development of each man and of the whole man.” The human person is the center of concern for us Christians. [Confer PP nn.15-17]

The Dicastery for Human Development also expresses the Holy Father’s care for suffering humanity, including the needy, the sick, and the excluded, and pays special attention to the needs and issues of those who are forced to flee their homeland, the stateless, the marginalized, victims of armed conflicts and natural disasters, the imprisoned, the unemployed, victims of contemporary forms of slavery and torture, and others whose dignity is endangered. It studies the social teaching of the Church and works to make it widely known and implemented, so that social, economic, and political relations will be increasingly imbued with the spirit of the Gospel. It also collects information and research in the areas of justice and peace, the development of peoples, the promotion and defense of human dignity and human rights, such as rights pertaining to work, including those of minors; the phenomenon of migration and the exploitation of migrants; human trafficking and enslavement; imprisonment, torture and capital punishment; disarmament and arms control as well as armed conflicts and their effects on the civilian population and the natural environment (humanitarian natural law). It evaluates these data and informs the episcopal agencies of the conclusions drawn, so that they may intervene directly where appropriate.

Human trafficking, globally expanded, is at the heart of many profitable businesses today in the world of migrants and refugees by exploiting young girls and children. It is, at the moment, one of the main focuses of activities at the new Dicastery. On the other hand, the promotion and implementation in local churches, through Bishops’ Conferences, of Pope Francis’ encyclical letter on ecology Laudato Si’ is a main task given to the Dicastery.

The Pope is coming on two short visits to Thailand and Japan, to an Asian region where hundreds of thousands, even millions of persons are forced to leave their countries because of war, poverty, and lack of freedoms, often to become victims again in foreign environments.

A message of Peace is, of course, expected from the Pope when he visits Japan. Nevertheless, thousands of young migrants and refugees who have come here filled with dreams of a better life, as well as many other human victims forgotten by society, will feel happy to have a look at a Pope who takes their sides. 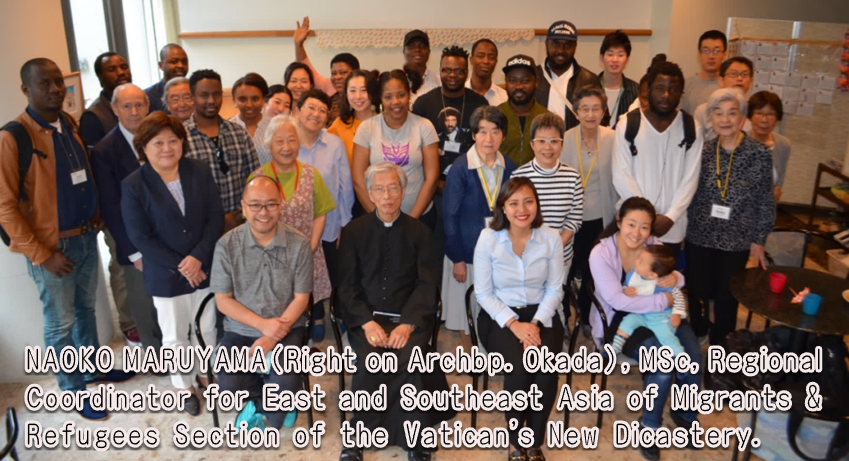 N.B. (Most of the content of my article is taken from the official HP of the Vatican and https://migrants-refugees.va/trafficking-slavery/)