Consideration of Christians Regarding Nuclear Technology

Situation of the Catholic Church in Korea regarding nuclear technology 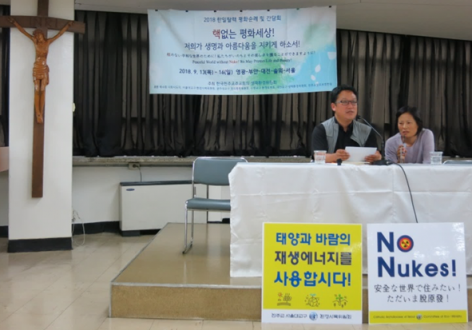 The concern of Korean Catholic Church towards nuclear technology has been brought to light in the aftermath of the 2011 Fukushima nuclear disaster. Our activism dates back before 2011 as we have taken a counter-movement against the construction of Yonguan nuclear power plant primarily under the leadership of Gwangju Archdiocese. However such efforts were only recognized locally and did not receive attention beyond there. The Fukushima disaster has given us a significant opportunity to perceive nuclear power not only as regional problem but also as a global issue that humanity faces.

In Oct. 31, 2011, Bishop Kang U-il, Director of the Catholic Bishops Conference of Korea, gave a lecture titled “Consideration and responsibility of Christians toward another social construction for the denuclearization of power generation” which paved the way for the Catholic Church in Korea to handle the nuclear issue more seriously. He defined nuclear disaster as an alarming accident that can affect tens of millions in the area which will bring about a great disaster that would violate the basic human rights of the living. In the same year the Samcheoc Committee was awarded the environmental prize through the evaluation of their works to reduce the appeal of nuclear power generation.

On November 8, the 17th Bishops of Korea & Japan held an Exchange Meeting in Sendai and issued a statement titled “Abolish Nuclear Plants Immediately ~Facing the Tragedy of the Fukushima Daiichi Nuclear Plant Disaster~”, which has led advocates to the awareness of the anti-nuclear power generation movement of the Catholic Church in Korea. In addition, a Catholic group “East Coast Anti-nuclear Power Generation Movement, Catholic Solidarity” was founded in Yonghae Church of the Andong Diocese on Jan.16th, 2012. During 2012 and 2013 the anti-nuclear power generation movement has been actively continued. Immediately after, a statement was issued towards the opposition of “the planning of new construction of nuclear power generation and Miryang transmission tower which will transmit electricity from nuclear plants”. The 18th Bishops of Korea & Japan Exchange Meeting on the theme “Denuclearizing power generation is our life” has, in particular, brought major impact to the Churches in Korea as well.

The initial fruit of these various denuclearization efforts could be the publication of the booklet “Nuclear technology and teaching of the church – Views of the Catholic Church of Korea for nuclear technology” which was approved and issued in 2013 by the autumn Bishops Conference. Bishop Kang U-il’s address on the publication of this booklet focused on “the situation we are now facing is not the issue of examining an alternative plan and calculating it with individual profit. This is a serious situation that we must decide right now for ourselves, for all the people of the present and the future.” The critical nature of the nuclear technology and the need of our imperative participation were proved theologically and scientifically.

Afterwards, the Catholic Churches of Korea pushed more actively the denuclearization power movement forward. The series of special events on Sept. 14, 2015, included the announcement of “anti-nuclear power generation and the start of Catholic solidarity” alongside various declarations, seminars and country pilgrimages on foot for anti-nuclear power efforts. Prayer and press conferences were continuously carried on.

The spring Bishops’ Conference in 2017 officially approved the “campaign to collect one million signatures for the elimination of nuclear power generation” that was to proliferate in churches emphasizing the necessity of including anti-nuclear power in the agenda of the questionnaires of the policy challenge book for the candidates of the South Korean presidential election. It is a very significant occasion to have the “2018 Korean & Japan peace pilgrimage and roundtable conference for de-nuclear power generation” which will also give new directions and impact for further action among the churches in Korea. 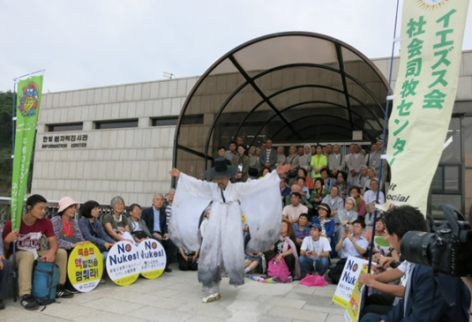 Rev. Fr. Thomas Merton, OCSO, who advocated new peace theology in the face of the crisis towards dreadful nuclear war, said aptly, “We receive a challenge to prove that our existence has enough value to survive in the world by acting according to our model of the highest ethical standard because we are rational, mental and human.” As we, Catholics, have been gathered with our confession of faith to our Lord, the Creator of all the creatures, we should have our responsibility and human right to consider the problem of nuclear technology along our Christian belief, by warning its dangerous use to all the people of the world.”

At first the issue of nuclear technology is not limited to a national level. At the very least it is absolutely necessary for South Korea, Japan, China, Taiwan, and the Hong Kong churches to organize into an international coalition and then proceed to a larger Catholic solidarity of denuclearization and peace. We should now pay particular attention to China which operates 36 nuclear power plants at present and is building an additional 20 and plans to have 110 by 2030. This is also a serious issue that Korea and Japan face. In order to deal with such nuclear threat, the Catholic Church of the northeastern Asian region must resolve to show the thinking of the church for denuclearizing power and carry on our mission given by God who is the master of the life of the church in the world for denuclearization on solid ground. 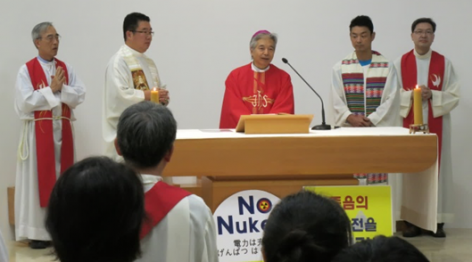 In order to do so, it is necessary for the Catholic Church to strengthen furthermore, both the content of the bishops’ conference and its implementation at local parish levels for the denuclearization efforts. Seeking only the promotion of this movement at the national level is, as if one expects fruit from a tree that has no roots. It is not enough for us to be only pulled by civil society groups which purpose is denuclearization as the only social standard. When a church clearly offers its views on denuclearization and what it really means, healthy cooperation with the civil society is truly accomplished.

Under the influence of denuclearization movements Christianity has searched in the Bible a theological basis of the meaning of denuclearization. But it is not enough to solely rely on expert theologians, but it is also necessary that Christian communities think about nuclear technology from the viewpoint of their faith in their daily lives, sharing their thinking, and working together to accomplice results. Such cooperation will present a big challenge and lead us further toward stable denuclearization inspired by our faith in God our Creator.

From these viewpoints, we should take into consideration the German denuclearization planned proposal to close all nuclear power plants by 2020, while noticing its difficulty since Germany still tacitly consents to holding dozens of nuclear weapons located in the country in the event of war. It is necessary for the Church to produce an appropriate theological base in order to promote comprehensive denuclearization peace movements against all related nuclear technologies which include nuclear power generation plants, nuclear research facilities, the naval bases in Jeju Island Gangieong Village that support nuclear submarines and nuclear carriers, and the THAAD military bases in Seongju Soseongri, which are considered as part of the system coping with nuclear weapons. 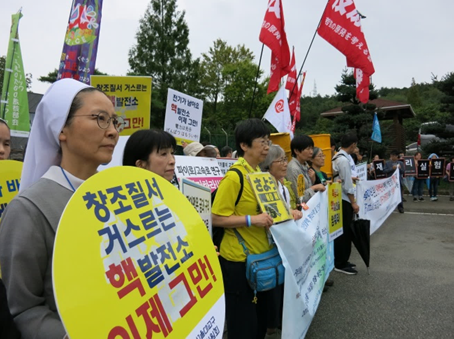 Nuclear mafia shouldn’t be the term referring to only a specific group in our society. The Korean society has been already suffering from poisoning by nuclear technologies. We are living under the influence of nuclear power generation with the risk of nuclear accidents that go back to the stage of the beginning to develop nuclear weapons. The Church must break off its relationship with nuclear technology which, is in fact, a technique of death and follow the will of our Lord “who has come that they may have life and have it to the full.” (John 10:10). Thus, the Church must seriously reflect on our actual civilization. In such respect, the basic core of current society is not merely a problem of natural energy resources.

Society can’t escape from the toxic situation of future nuclear technology even if it would switch to renewable energy. Those who developed the nuclear technology, while fighting in a series of continuous wars have planted it in the center of our human life. It must be time for both, the Church of Korea and Japan, to respond to God who is the Lord of life and to all His loving people. Therefore, now is the best time for us to seriously think and respond how to make every possible effort in the name of our Christian faith, while living in the nuclear era.