Through the Minority Youth Forum in Hokkaido ～ What is Reconciliation? ～

What comes to mind when you hear the word “minority”? In my job as a social worker I interact regularly with people who have disabilities or illnesses. I witness how they suffer from isolation and loneliness, and how they struggle to join the flow and ride the waves in society. I myself sometimes feel isolated, like I might be a minority, as I walk through my daily life. But what, exactly, are the reference points in society that determine “minority” and “majority”? And where does discrimination and exclusion toward minorities come from? With such questions in my mind, and with desire to think about their meaning even a little, I attended the “2nd Minority Youth Forum in Hokkaido,” hosted by the Center for Minority Issues and Mission.

The theme of the Forum was “Seeking the Kairos of Reconciliation.” Through lectures and a field trip we learned about the history of the Ainu people, examined the discrimination and exclusion toward minorities that still exist in present society, and considered reconciliation together with other participants. The 30 participants gathered from across Japan as far as Nagasaki, and from abroad; Canada, Taiwan and Korea. The Forum also aimed to build ecumenical relations among participants, across boundaries of minority, background and denomination. 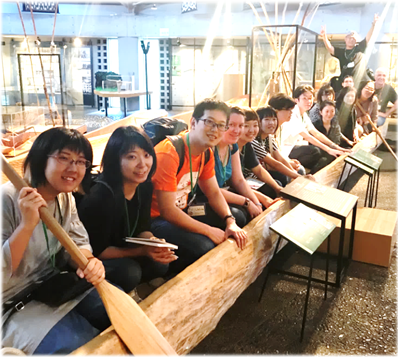 Discrimination toward the Ainu people ― Upon visiting Nibutani
In the opening lecture on Day 1 we learned about the history of Japan’s invasion and colonization of Hokkaido, where the Ainu people lived, as well as Okinawa and Korea; that the Hokkaido Former Aborigines Protection Act, which was ostensibly created to protect the Ainu people who struggled in poverty (its actual purpose was to coax them into farming), existed until just 20 years ago, and that even though the Japanese government recognized the Ainu as an aboriginal people in 2008, there is still a very long way to go recover the human rights of the Ainu, including the return of ancestors’ remains to their home communities.

The following day we visited the Nibutani community, where 70% of residents have some Ainu lineage―the highest concentration in Hokkaido. There we learned that the Nibutani Dam was built against the wishes of Ainu people, that this caused the loss of multiple ancient sites, as well as cultural customs associated with the Ainu staple food salmon and their sense of identity. We also heard how marriage between Yamato Japanese (who came from Honshu island) and Ainu used to be discouraged, and that there are still many Ainu youth who hide their roots while living in cities. We learned that Japanese school education teaches almost nothing about the Ainu. Thinking back to my own school days, I have almost no memory of learning about the Ainu people. Hearing these things, I felt the path of the Ainu people was filled with suffering that surpassed my imagination. When I heard Mr. Shiro KAYANO (Director of KAYANO Shigeru Nibutani Ainu Resource Center) say, “The Ainu people are an aboriginal people and a minority,” I thought about the words’ meaning and felt the discrimination that still continues. I felt the darkness that resides in Japanese society and in each of our hearts as human beings, with regard to the Ainu people.

Engagement toward reconciliation
In the presentation given by Canadian participants, a letter written by the United Church of Canada (Protestant) in 1986 was introduced, in which the Church apologized for its role in the oppression of aboriginal peoples (“First Nations”). The apology confessed that the church, in its eagerness to preach the Gospel of Christ, did not lend ear to the cultures and values of the aboriginal people.

The presentation also introduced the “Kairos Blanket Exercise,” an initiative toward reconciliation. In this exercise, which was born out of regrets and reflections upon the history of oppression toward aboriginal peoples, blankets are spread upon the floor and participants learn about the history of First Nations and how settlers gradually invaded into their world. Its purpose is to grapple toward reconciliation and release heavy burdens. This exposure to a practical initiative toward reconciliation, and to the stance of confronting facts of the past, were deeply thought-provoking for me. Taking hint from this, perhaps performing exercises that are fitted to various discrimination problems in society can be a good way to foster mutual understanding.

I’d like to introduce here a quote that left an impression on me: “Reconciliation is about forging and maintaining respectful relationships. There are no shortcuts.” (Murray Sinclair, Chairman of the Indian Residential Schools Truth and Reconciliation Commission)

As one human being
During the 4 days’ morning and evening prayer times, as I heard about each person’s testimony about their roots, experiences, values, social issues and inner struggles, I was led to think about many things. We all live in society, belonging to a variety of groups and institutions, from large ones like nation and society to ones that are more near at hand, like workplace or school. Belonging to groups is necessary as we go through life, but this can sometimes lead us to lose ourselves within the group, or divisions can arise due to categories that prevent us to accept each other’s differences. But this Forum helped me to realize that it’s important to occasionally return to the obvious assumption that we are all individual human beings, the protagonist in each of our lives.

Reflecting once again on minority and reconciliation
In the middle of this Forum we were suddenly hit by the Hokkaido Eastern Iburi Earthquake. We ourselves experienced a shortage of food, and several overseas participants had never experienced an earthquake before. When morning came the program was paused temporarily to search for food and gather information. We exchanged words of worry in that time, but, strangely, I felt that our interactions and sharing increased. Amid this situation a missionary said, “When things like this happen, it can also be an opportunity for friends who had grown distant to reconcile.” These words reminded me of the Forum’s theme: “Seeking the Kairos of Reconciliation.”

In this way, the fact that we experienced an earthquake together added great meaning for me. And when we think again about minorities and discrimination and exclusion, perhaps we just don’t notice, but we might all have minority qualities. Can we notice and pay attention to this? To what degree are we able to accept “differences” between oneself and another, and walk together? These might be the questions directed at us. And beyond these questions we might find one step toward reconciliation.

From one new friend, a participant from Korea, I received the comment that, his impression of Japan became more positive than before because of the earthquake, because of our mutual involvement. Perhaps it is also important to build reconciliation in small steps, through personal encounters. I would like to conclude with an expression of heartfelt thanks for this opportunity to gather across differences of background and denominations. I would like to link these relationships to my future steps.