The Catholic Church and Issues concerning the Constitution

As the result of the recent sudden general election, the present Government of Japan, which has managed to virtually maintain the status quo, seems intent on beginning a full-scale movement toward revising the Constitution of Japan with the ultimate objective of revising Article 9.

On that occasion, the Catholic Bishops of Japan and Korea issued a peace statement entitled “Praying for peace in Northeast Asia” (November16, 2017). This was in stark contrast to the Japanese Government’s way of speaking vehemently against North Korea’s development of nuclear weapons and the threat of their missiles, stressing the need for a “pressure offensive” in coordination with the United States.

The Bishops’ message says, “All people should recognize that both the arms race and containment by nuclear weapons do not guarantee true and stable peace but rather greatly increase the risk of war. Therefore, we insist that people should abide by the principle that true peace can be built only on mutual trust (Pope John XXIII).” Further, “We cannot approve of the vast wealth spent on arms buildups, which unbearably burden the poor and increasingly deteriorate the environment.” Again, “All people, particularly heads of state and military leaders, should consider before God and the whole human race their serious responsibility toward world peace and should continue to make every effort to advance peace by promoting dialogue.” 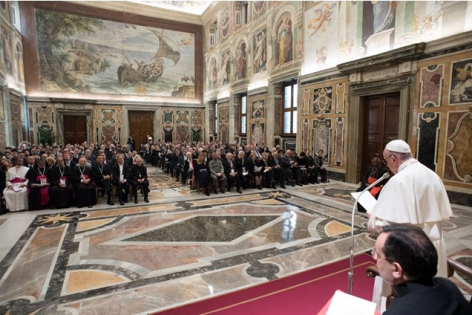 Prior to this, an international conference was held in the Vatican on “Prospects for a nuclear-free world and integrated disarmament” (November 10-11, 2017), where Pope Francis spoke as follows: “Nor can we fail to be genuinely concerned by the catastrophic humanitarian and environmental effects of any employment of nuclear devices. If we also take into account the risk of an accidental detonation as a result of error of any kind, the threat of their use, as well as their very possession, is to be firmly condemned. Essential in this regard is the witness given by the hibakusha, survivors of the bombing of Hiroshima and Nagasaki, together with other victims of nuclear arms testing. May their prophetic voice serve as a warning, above all for coming generations!” On September 20, Vatican City took the lead as first signatory to the United Nations’ Treaty on the Prohibition of Nuclear Weapons, which was simply ignored by the Japanese Government.

These appeals of the Catholic Church echo the Pope’s Message for the 50th World Day for Peace, January 1, 2017: “Especially in situations of conflict, let us respect this, our ‘deepest dignity,’ and make active nonviolence our way of life. … In the most local and ordinary situations and in the international order, may nonviolence become the hallmark of our decisions, our relationships and our actions, and indeed of political life in all its forms” (no.1). “To be true followers of Jesus today also includes embracing his teaching about nonviolence” (no.3). “We in our family do not need bombs and guns to destroy. To bring peace—just get together, love one another. Then we will be able to overcome all the evil that is in the world” (no.4).

It may be said that these recent “active peace” statements by the Catholic Church are in line with the consistent intentions and expressions of the Catholic Bishops’ Conference of Japan ever since Pope John Paul II’s “Hiroshima Peace Appeal” in 1981. For instance, in their Peace Message of 2005, “After 60 Years from the End of War World II – The Road To Peace Based On Nonviolence – Now Is The Time To Be Prophetic,” the Catholic Bishops of Japan called for nonviolent “dialogue” as follows: “This nonviolent spirit appears in Article 9 in the form of the renunciation of war as a means of settling international disputes and the renunciation of arms. Are we not right to be proud of the fact that for sixty years we have not killed anyone in war, and that none of us has been killed in war? In the midst of a world where it is extremely difficult to break the chain of violence, we need to construct a new solidarity with the people of the world on common issues and thus strive for peace.”

In this context, an ad hoc “Sectional Committee on Policy regarding Revision of the Constitution” was set up this autumn within the Japan Catholic Bishops’ Conference’s Council for Justice and Peace and held a series of lectures to enlighten people inside and outside the Church. 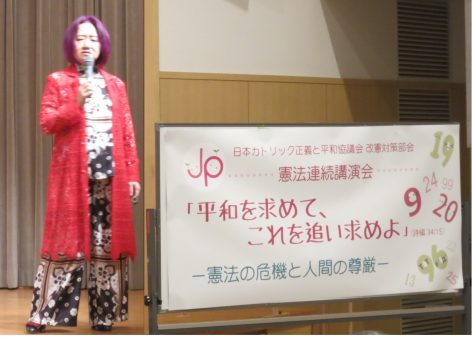 The first lecturer was Professor Hama Noriko of Dōshisha University, who spoke from the standpoint of economics. Her title was “Light shattering darkness: the Constitution of Japan shedding light on the global age.” She noted that the Preamble to the Constitution of Japan says, “We, the Japanese people…shall secure…the fruits of peaceful cooperation with all nations and the blessings of liberty throughout this land,…trusting in the justice and faith of the peace-loving peoples of the world… [where] no nation is responsible to itself alone.” Then she stated her own position, that the future of the Japanese economy should aim at participating in the global economy not by shares in “market control” but by shares in a true mutual “sharing.”

In the second lecture, Professor Shimazono Susumu of Sophia University spoke from the standpoint of religion on “The Constitution of Japan and the sacredness of peace and life.” He spoke about how the prewar Shinto national polity ignored individuals and, by pushing them into the absolute national system, limited personal freedom.

The third lecture, given by Professor Nakano Koichi of Sophia University, was entitled “Politics and the Constitution in support of human dignity.” He said that, from the standpoint of political science, the Constitution and its interpretation are always in mutual conflict, but that the present Government’s maneuvering to separate the constitutional system from its premises in the Preamble only undermines human dignity and human rights. He pointed out that in this sense it is unconstitutional and destructive.

Japan’s Constitution, which originally had the task of facing up to the state’s violations of human rights, is, of course, a positive law defining the state’s responsibilities, but it must basically set forth its position regarding human rights and human dignity. In this regard, the UN’s Declaration of Human Rights, which expounds a norm for political ethics, necessarily aims at sharing a lofty ideal concerning the common good of humanity which is desired by international society and, in this sense, it resonates with the Christian vision which proposes universal human ideals.

“Peace” (shalom) in the Bible, unlike the Greek eirēnē or the Latin pax (meaning “absence or interruption of combat” or “truce”), basically means “the completion of a building,” and thus connotes “a contented state of fulfillment,” enjoying blessings, rest, honor, wealth, life. If one believes that “if you want peace, be prepared for war,” the only conclusion that can be drawn is “restraint,” but shalom is not a type of peace which only suppresses struggle without changing the status quo. It is an eschatological prospectus which opens out onto new possibilities for the future.

Of course, from the human situation as viewed in the Beatitudes of the Sermon on the Mount, statements like “Blessed are the peacemakers” are paradoxical. Such people live in dire poverty, but they are called “blessed” because they are the ones who are open to receiving the coming kingdom of God. As recipients of the grace of God, they are “blessed” because they can live according to these graces.

The biblical view of history has a beginning and advances toward a goal. Struggles are always inevitable as this history deals with new situations that arise. However, persons of faith aim at the fullness of “shalom” while struggling with such difficulties. Conversion to God, trust in God and in humanity, peace instead of war, tranquility instead of fear, trust instead of distrust, freedom instead of oppression—in thinking about revision of the Constitution, I would like to consider all these things which Christians are called to strive for in the light of “the four pillars of peace: truth, freedom, justice, and love” (according to Pacem in Terris).