“NO to Nuclear” Message of the Japan Bishops’ Conference: Version 2

On November 11, 2016, the Japan Catholic Bishops’ Conference issued the following public message: “On the Abolition of Nuclear Power Generation: A Call by the Catholic Church in Japan Five and a Half Years after the Fukushima Dai-Ichi Nuclear Power Plant Disaster – A Message from the Catholic Bishops’ Conference of Japan to All the People of Earth, Our Common Home.” This message was a confirmation and a new starting point for stand against nuclear power taken five years ago, on November 8, 2011.

The message recalls the lessons learned from the nuclear accident of 2011. (1) Nuclear energy produced artificially by atomic fission is an extremely powerful phenomenon that does not occur naturally. (2) Humanity has not yet developed the technology to make nuclear energy safe, namely, it does not have safe means of disposing of radioactive waste. (3) In case a nuclear accident recurs, the life of the people is destroyed from its roots and the climatic damage will extend to other countries and coming generations. (4) The dream that economic development creates human happiness has a magic appeal everywhere in the world and resists the dismantlement of nuclear power.

Japan, the world’s only victim of atomic bombing, has continued to promote nuclear power as a national policy since 1955, but since then it has experienced a number of misfortunes. Unfortunately, we cannot assert that our country, nuclear victim though it is, has learned from past experience and carried out its responsibilities in the nuclear field. Can it be said that the government and the power company seriously confronted the problems of hibakusha workers or the economic, social, and psychological hardships of the citizen victims of the Fukushima nuclear plant accident? Rather, instead of foreseeing prospects for the consequences of the accident and terminating the plant, as well as where to dispose of radioactive nuclear waste, they are trying to pursue programs of the nuclear fuel cycle, open nuclear plants, and export them to other countries. In fact, the government has terminated its evacuation order, as if the nuclear accident has already been overcome.

Many people are aware that, because of the Fukushima accident, the nuclear program has collapsed, as far as concerns safety, disposal of nuclear waste, health conditions, peace, and economic costs. Nevertheless, thorough investigation into the cause of the accident and pursuit of the responsibility of the power company and the government remain unclear. Education and the mass media are at a loss regarding the issue.

In May 2015, Pope Francis published the encyclical Laudato Si’ stressing the importance of caring for the world, our common home. The encyclical still takes a cautious attitude toward the abolition of nuclear plants but discusses ecology from the ethical side, such as from the standpoint of ecological justice and our responsibility towards future generations. In the third chapter the encyclical indicates that the ecological crisis is partially occasioned by a postmodern emphasis on human-centered technology and the hegemony of a minority of intellectuals and people with economic power. Biotechnology is a classical case, and although the encyclical does not touch on it, nuclear energy can be reasonably included.

The Japanese bishops’ message is a strong appeal to world solidarity regarding nuclear energy. In case of an accident, nuclear pollution crosses boundaries, and the technology of nuclear energy, like mining and refining uranium, the treatment of used nuclear fuel, disposal of nuclear waste, etc., are all part of a global system and cannot be dissociated from the issue of international security. Concerning this the message makes this appeal: “We, the Catholic Bishops’ Conference of Japan, appeal to all people who share our common home called Earth that we join hands, rise together and act in solidarity to end nuclear power generation. … We hope that, following the example of the Church in Korea, bishops’ conferences … might learn from Japan’s experience and speak out forcefully.”

The message states that arguments for and against nuclear energy must consider respect for all humans, including future generations, and concludes, “…we must stop and ask ourselves what sort of human development society should aim toward, what constitutes true riches.” 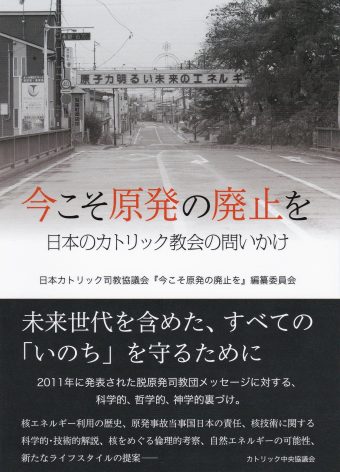 The Catholic Bishops’ Conference of Japan preceded the bishops’ message with a book entitled Stop Nuclear Plants Now – The Catholic Church of Japan Questions Nuclear Energy. This was written to corroborate the public appeal of 2011 to abolish nuclear energy. It dealt with: (1) the history of nuclear development up till the Fukushima accident, including human and social issues, (2) scientific problems regarding nuclear energy and nuclear plants, and (3) Christian thinking with regard to nuclear abolition. The emphasis is not only on the economic and political aspects of nuclear energy, but it mainly provides material to reflect on the ethical and gospel viewpoints that Japanese society greatly lacks.

Nuclear plants are the by-product of the close relationship with military industry, the strategic security and economic policies of a system seeking closed profit for those who hold national power. As a result, a small privileged class seizes military, economic, political, scientific, and technological power without regard for the will of the people, hides information, creates division with bribery takeovers, and acts rampantly in ways incompatible with democracy.

Such an oppressive system is irreconcilable with the life and mercifulness of Jesus. Nuclear energy is similar to the temptation in Genesis: “Once you eat, your eyes will be opened and you will be able to distinguish between good and evil, as God does” (3:5). It is a repetition of the original sin and to some extent a matter to be approached with true faith. Human pride rejects God, and when man takes the place of God, the last brake on human society fails. Nuclear fission involves the breakup of atoms which were united from the beginning and converts them into an energy that is capable of annihilating everything. The Fukushima nuclear accident could be the hypocenter of earthquake-shaken Japan that could create a crack in world civilization and bring it to ashes.

In Laudato Si’ Pope Francis stated that in order to achieve peaceful development humanity needs reconciliation—with God, among humans, and of humans with regard to all creation. Nevertheless, nuclear energy disrupts not only relationships among those three levels, but it also produces division among us. The Pope in his apostolic exhortation Evangelii Gaudium (The Joy of the Gospel) affirms that anti-gospel globalization, like a whirlpool, brings together the huge military- industrial complex that relies on power and the pursuit of profit, the control of freedom of expression through legislation on secret information, the strengthening of security against terror, and overall militarization.

We must restore the original power of life, the power of the Holy Spirit, by abolishing nuclear energy, a fictitious power that only results in threats and fear. In order to achieve that, networks of solidarity with the victims of the nuclear accident are needed, through exchange of information and personal reflection with these victims so as to enable them to recover from the damages they have suffered. More than large-scale production of electricity, there is need to reconstruct a society that protects and respects human rights and human dignity. A “human” society, with its inner human resources and the strength of people working together to build a better future, can produce the desire and hope for an endurable possible vital energy. Not only in theory but in attempting a real solidarity among people through networks linked to the Atoms Free for Peace, we call for nuclear abolition in cooperation with others, including a stronger collaboration with people of neighboring countries. We want to make our voice against nuclear energy resound in the Vatican.