Preliminary Reflections on Justice in the Global Economy

In this article I want to share what I have been thinking about the theme covered in the Jesuit document introduced in the last issue of this Bulletin, “Justice in the Global Economy – Building Sustainable and Inclusive Communities,” hoping that it will serve as material for prayer. In order to think more basically about this topic, I will begin by determining a “rank of values,” because I think we need to reflect on what is happening with the globalization of the economy. Depending on whether one understands the issue or not, there will be different views regarding what should be done to promote justice and where confrontations should occur. 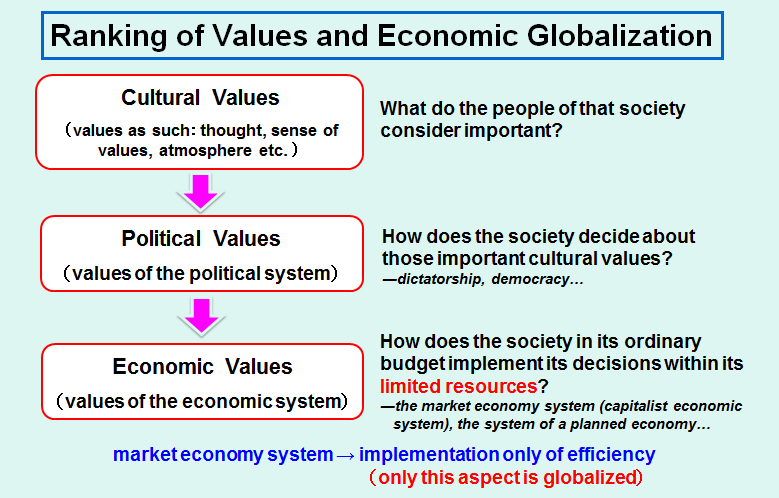 It is said that there are three levels of values: (1) cultural values, (2) political values, and (3) economic values. If the ranking of these values does not follow the order indicated in the accompanying chart, something is amiss. The chart includes the concrete meaning of each value.

“Culture” here does not have the narrow meaning as in “traditional Japanese culture.” It rather refers to “what society considers important” and is used in a broad sense to include that society’s system of social values, its atmosphere and ideology. In other words, it refers to the very values directly connected with the common good and respect for human dignity.

On the other hand, political values and economic values are values as systems, as I will explain. In contrast to cultural values, like “what people consider important,” political values are matters involved in the system of “how people (who hold a variety of different values) ask how, as a society, they are to come to some decision on how to choose what they consider important.” So if cultural values (what people consider important) are not to the best extent reflected in a society’s decisions, something goes amiss with that society. Again, economic values are also matters related to the system where “politically selected values can be carried out sustainably amid limited resources, technology, and environment.”

So cultural values come first, as in the chart, and if these cultural values are not reflected in politics and if the economy does not move in the direction of these cultural values, that society becomes one in which what people consider important cannot be realized. Nevertheless, in reality, this ranking of values is often reversed. When that happens, that society becomes very anti-gospel and the implementation of justice cannot be achieved. Karl Marx, too, detected such a reversal of values in society after the Industrial Revolution and, by having economic relationships regulate the political system, he thought he could, as a final result, also regulate peoples’ minds (the lower value regulating the higher value). However, Marxism (atheist materialism) did not think of correcting this reversal but can rather be said to have made use of it.

From this perspective, it can be said that the globalization of today’s economy is structurally maximizing a trend to reverse the ranking of values. I think this is a basic deep-rooted problem, because, up till now, at least in developed countries, in each nation as a sovereign power the cultural values that accompany democracy as a political system are reflected in its decisions and, on that basis, that nation’s economic system can somehow be controlled. In other words, in each country the rank of values was functioning to a certain extent, and it can probably be said that the social revolution Marx had predicted did not occur. Nevertheless, within the present globalization of the economy, economic interests alone gain prominence and are globalized. As a result, since there is no world government to control the economic system and its values, no one national political regime is able to control its economic system, thus strengthening a reversed ranking of values.

Let us now ask what economic globalization consists in. I think that (1) the thoroughgoing market mechanism (referring not only to the domestic market but also including the absorption of each country into the global market) and (2) multinational and super-national businesses are being globalized with a bias toward capitalism. The “Neoliberalism” is a term expressing the globalized economy negatively, but this “freedom” cannot be said to be a “freedom” for the people but for business activities and the pursuit of profits. Multinational businesses have become able to move freely all around the world amassing profits. To be a bit more specific regarding market mechanism, the market is a very effective mechanism for implementing values of efficiency (by eliminating useless elements) but has no means of implementing other values. And again, which is the most frightful thing, the market mechanism has the power automatically to reject people, organizations, and areas that bring about less efficient results.

Anyway, if everything is entrusted to the market, the poverty gap will only widen and the economic power of multinational businesses will control politics and governments as such. Another frightful thing is that politics will be controlled by economic values and the resulting reversal of values means that there will be a stronger tendency for politics (governments) and economics (businesses) to control the culture (people). The key functions for controlling people are education and the mass media. I think education is basically the means for developing the cultural values believed to be important by the people and for learning how to implement these important values in society in such ways that they are reflected in politics and the economy. But if the ranking of values is reversed, education can be used to manipulate people’s thought and consciousness. If values are reversed, the mass media will gradually be deprived of the freedom to report, will tend more to act as spokesmen for the advantage of the business world, and the consciousness of journalists themselves will be controlled by economic values. Hasn’t history taught again and again that this is what happens?

For instance, during the past ten years, many Japanese have somehow come to think it only natural that they can strive on their own and take responsibility for themselves. Fundamentally, the state should take the final responsibility that its citizens get the basic means to survive, but I think that through education and the mass media people have been controlled (whether intentionally or unconsciously) to feel that it is only natural that individual responsibility lies with themselves. Forced competition and the exclusion of those rejected by it seem to me to have purposely created the feeling that nothing can be done about the situation. This is a great danger totally opposed to the values envisioned in the Gospel which we Christians value highly (that all persons are considered to be important beings loved by God).

Again, we can understand this better when we think of the reversal of values taking place not only in Japan but also around the world especially in the rightist tendencies gaining momentum in advanced countries. In other words, because of economic globalization, politics are being controlled by the economy and so the appearance of a sense of crisis among the people and in the state seems to give rise to the appearance of a rightist movement, namely “the tendency to desire a stronger state.”

I have written about the meaning of economic globalization from the point of view of a ranking of values, but unless the political level or cultural level is globalized so as to correct the reversal of values, it will become impossible to control the global economy adequately. Nevertheless, in spite of the sincere interest of the World Federation regarding the whole world, especially regarding weak developing countries, it does not seem realistic to think that this can be done in the coming several decades. Therefore, the only way left will perhaps be to exert some measure of check on the excesses of economic values by linking the cultural level to the global level. The idea that “human life and dignity are above business profits” should be a globally accepted value, and a result of such a value will be the need to exert some control on the economy. At this stage, I think that the only way to achieve this is by regenerating a communal spirit on various levels and finding ways as citizens to promote compassion and solidarity beyond national boundaries. In addition, I consider the role of religion (the Church) to be very important in regenerating communities, deepening compassion, and building solidarity.