“Justice and Peace” 2015 Tokyo Rally and Visit to Fukushima

by Korean Catholic “No Nukes” Delegation

The Rally began in the Tokyo Cathedral with the keynote address by Professor Nakano Koichi: “How to contribute now to social justice and peace in East Asia.” Due to the fact that, just a week previously, the Security Defense bill had been (outrageously) passed by the Diet, an audience of over 600 people listened eagerly to the Professor’s penetrating political analysis. He spoke on the global systematic situation after the cold war, which later spread widely around the world and which provided a few oligarchies with monopolies of power and wealth. But then, paradoxically, it connected up with a movement toward “nationalism,” which, in Japan from the second half of the 1990s, gave rise to “historical amendments,” such as erasing from textbooks the description of “comfort women.” Prime Minister Abe’s statement on the occasion of the 70th postwar anniversary follows the same trend. According to Prof. Nakano, comparing the Abe statement with the “Murayama statement” 20 years previously, the decisive difference is that Abe is not addressing Asian countries but the United States government. A basic personal historical reflection is lacking and shows a decision to follow blindly the United States and participate in American wars.

Prof. Nakano, much admired and encouraged by young people, speaks publicly against the Security Defense bills in student gatherings. He mentioned that many student leaders are graduates from mission schools and that movements against the present government, which have billowed like huge waves at all levels around Japan, work for the defense of life and personal respect. He expressed his view that, since these movements are in accord with the goals of the Church, there is an opening for cooperation between citizen movements and the Church.

I chaired the group “Atoms Free for Peace” that dealt with how to establish a Catholic network in East Asia to abolish nuclear plants. In case some accident occurs in a nuclear plant in our region, both Japan and Korea will inevitably be affected. Thus, common solidarity action against nuclear energy becomes a very important issue.

Over 70 persons participated. In the morning session Mr. Yanagida Makoto of the citizens’ group tanpopo-sha, which monitors issues concerning nuclear plants, spoke on the situation concerning movements against nuclear energy and their future. Later again, Ms. Muto Ruiko, victim of the nuclear plant accident, told of her experiences and her involvement in a trial against the Tokyo Electric Power Company (TEPCO) responsible for the accident. Her lecture was “Fukushima now – the nuclear accident is not yet over.” 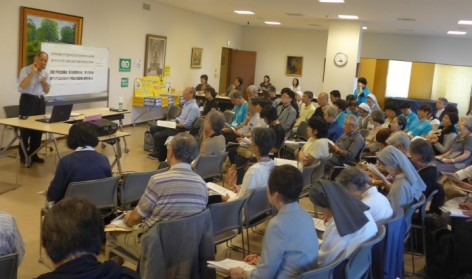 The afternoon session dealt with the same “no nukes” issue in Korea. We heard a report from representatives of a Catholic network for the “Preservation of Creation” – priests, religious, and Korean citizen members of an opposition movement against the construction of the Kori nuclear plant and the Miryang power supply tower near Busan. They are also against the invitation by Samcheok City to build a nuclear plant there.

A lady took the floor and said that her daughter often told her: “You are losing your time and energy in getting involved with people opposing nuclear plants. After all, you will lose and become dejected.” But after the nuclear accident in Fukushima she changed and is now an active member of the opposition movement. Looking around the world, only Catholic churches in Korea, Japan, and a few European countries are actively concerned with the issue of nuclear energy. Even the Pope’s recent encyclical Laudato Si’ on energy and environmental issues does not give much importance to nuclear energy and nothing is said about “no nukes.” Most probably, Japanese and Korean churches will bear the burden of getting the Vatican to speak openly about this issue. This, hopefully, is a new opportunity for further future cooperation.

On the 23rd, the last day of the Rally, a public symposium was sponsored by members of the Episcopal Commission for Social Issues – Bp. Katsuya Taiji (Sapporo Diocese), Chair of the Japan Catholic Council for Justice and Peace, Bp. Kikuchi Isao (Niigata Diocese), President of Caritas Japan, and Bp. Matsuura Goro (Nagoya Diocese), Chair of the Catholic Commission of Japan for Migrants, Refugees and People on the Move. 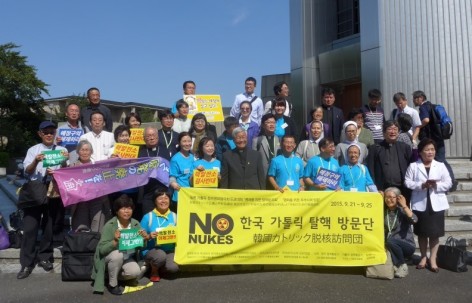 Yoyogi Park Public Gathering and Tour of Fukushima
After the closing Mass at Tokyo Cathedral members of the network “No Nukes for Peace” and Korean participants against nuclear energy attended a public rally “Sayonara War! Sayonara Nukes!” at Yoyogi Park. All the Korean participants climbed onto the podium and Fr. Kim Jun Han from Busan spoke on the need for an international citizens’ coalition opposing nuclear energy and handed a set of signatures from Korea against nuclear plants to Mr. Kamata Satoshi, representative of the organizers. His intervention was greeted with loud cheers. 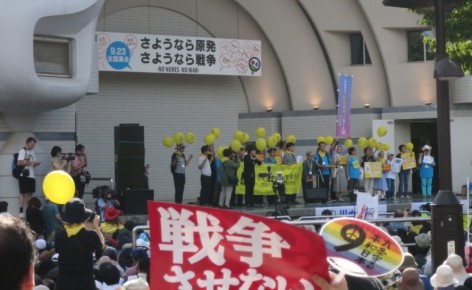 After that a group of over 40 people, Koreans and Japanese, opposed to “nukes” left by bus for a study tour in Fukushima. We stopped for a night in Iwaki City and early the next morning of the 24th we took a long trip around Iitate Village and South Soma City. From there we moved to Namie Town, which still has a restriction on population, and returned alongside the First Fukushima Nuclear Plant.

In Iitate Village, a resident of an evacuation shelter guided our group around nuclear waste removal zones. All were astonished at the sight of mountains of flexible containers. In South Soma City, people of Haramachi Catholic Church and of the Buddhist Dokeiji Temple spoke to us. It is difficult for residents there to speak of nuclear radiation and we paid close attention to their inner conflicts.

From there we proceeded to Namie Town, where a high degree of radiation still exists. At the foot of a monitoring post announcing “1.8µSv per hour” we opened our measurement kit. It read 7µSv per hour.

Again, we moved to the Ukedo area in Namie Town, the site closest to the First Fukushima Nuclear Plant. Survival victims of the tsunami were still there. Nevertheless, as a result of the nuclear accident, there was an order to quit the site and rescue operations had to be stopped. We observed with astonishment the sight of a primary school where the clock had literally been stopped by the tsunami attack. Rubbish had been set aside and there, in the midst of an empty wasteland where all remembrances have been swallowed up, on the second floor of the school a children’s book shelf and an organ were all that remained.

On the morning of the 25th we were lectured by local politicians and labor union leaders on problems faced by workers at the nuclear plants. In the afternoon we bade farewell at Narita airport to those rushing back to Korea for the “Obon” (Chuseok) holidays and the rest of us returned to Tokyo. Then, those of us who were still full of energy and curiosity went to the front of the Diet to join the antinuclear rally that convenes each Friday.

This was a fruitful time for deepening our knowledge of nuclear issues from a variety of viewpoints. But most important was the true friendship that grew up among the participants during a week of experiences in common. Added to the exchanges among Jesuits dedicated to the social apostolate on Jeju Island at the beginning of September, this time again we were able to work together with Korean Jesuits and collaborators. This experience of moving together towards a new world, overcoming various gaps and walls, was a unique blessing for us followers of the Gospel.