The Promotion of Justice in Asia Pacific

―Past, Present and Future―

This year’s annual meeting of the Jesuit Social Apostolate in East Asia and the Pacific took place in Kuala Lumpur from August 3 to 7. Together with Fr. Patxi Alvarez, Secretary for the Social and Ecological Apostolate at the Jesuit Curia in Rome, and Fr. Mark Raper, President of the Asia Pacific Major Superiors Conference, we were 39 members, Jesuits and collaborators from each Province and Region.

The theme of the meeting was “The Promotion of Justice in Asia Pacific, 40 years after Decree 4 GC 32”. First, Fr. Ando Isamu offered us a historical review of the Social Apostolate in the Region, concretely the work done by the “Socio-Economic Life in Asia Committee [SELA]”. After this introduction we got into the following three major components of the program. 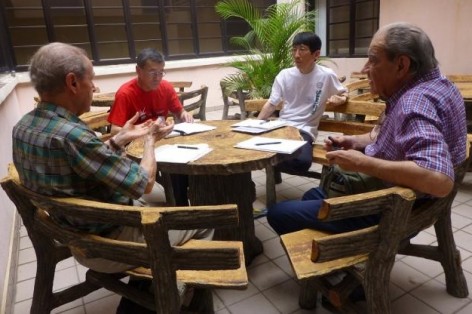 Malaysia NGO Field Visits
For our field visits we divided into 2 groups, and each group went to 4 different places. The following are the 8 NGOs we visited, where we listened to the explanation of their activities and had profitable interchange with their leaders.

CETDEM, the “Centre for Environment, Technology and Development, Malaysia”, which continues to promote sustainable development and to provide technical, practical solutions with a variety of completed and ongoing projects.

SIS, “Sisters in Islam”, a group within the Association of Women Lawyers that promotes Islamic women’s rights and empowerment.

SUARAM, “Suara Rakyat Malaysia”, which has established itself as one of the key organizations monitoring and advocating respect for human rights.

IDEAS, a think tank which exists to promote such principles as the rule of law, free markets, individual freedom and responsibility, etc.

We had deep input, could look back on 45 years of history, had the opportunity of knowing the Jesuits and their collaborators in the Asia Pacific Region better, and could also listen to reports about the variety of actions they are undertaking for the promotion of justice. It was a very fruitful meeting. 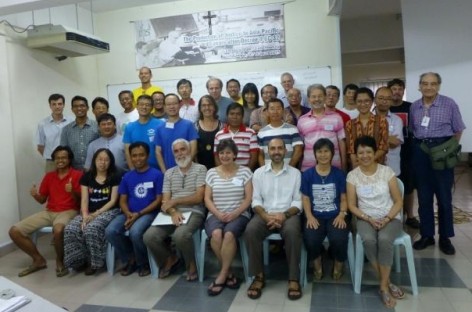 At the beginning we were told that we would merely go to the place where the migrant workers live. But in fact it was like sneaking into a site of equivalently slave workers and human trafficking of people from Bangladesh. Before going we had been given quite strict conditions, namely, that neither Caucasians nor women were allowed, that we should not wear clean clothes or shoes, only sandals or slippers, and that we should take off our watches and, as far as possible, even our glasses. But when we arrived at the place, the NGO members in charge imposed on us even harsher demands – that only those looking like poor workers could get in, that we should not wear sandals but only slippers or walk barefoot, and that even if we should see someone being beaten, raped, or forcibly taken away, we had to keep quiet and turn our eyes away. Unless we complied with these demands, we would not be brought along.

At the site there were dug-up shacks side by side, with apparently full families living in some of them. The persons guiding us called some of the migrant workers so that we could speak directly with them. It was shocking to see the fear in their eyes with no hope for the future. Accordingly, many among them are Rohingyan (the group of people that had to escape from Burma to Bangladesh and from there crossed by boat to Malaysia looking for work, where they were being forcibly sent from one work site to another).

Accordingly, since the government of Malaysia knows about and supports these orange and red zones (new large scale construction sites start one after the other), practically nothing can be done about the situation. Behind the government there are large-scale companies (mainly Chinese). And since these companies and the government both seem to believe that it will be impossible to go ahead with the development of the city without these migrant workers, very little advocacy action is possible.

It is interesting to note that the place we visited is in Cyberjaya, a new city area under construction (a developing cyber-town already quite advanced but still under construction, where foreign firms, foreign students and tourists converge), is at an arm’s distance from Putrajaya, the central zone where the residences of the Prime Minister and other officials are located. The contrast between the gorgeousness of that area and the situation of the migrant workers makes one shiver all over.

The members of the NGO plainly told us also that the situation in Malaysia was still better than the human trafficking and the slave-like work in Japan, that except for Africa, Japan was the worst place in the world and that JITCO (Japan International Training Cooperation Organization) was the problem. I felt the seriousness of the problems regarding Japan’s technical training program. (Needless to say, it is possible that the Malaysian NGO members exaggerate a partial piece of information but there is also the possibility that we just do not know, that the real situation is covered over).

The Japanese government, in preparation for the Tokyo Olympics, has approved urgent measures to bring in large numbers of foreign workers for the construction sector starting from April 2015 till 2020. This means that foreign workers will have to work at construction sites till 2020, under the status of “Designated Activities” and like an extension of the technical training system. If at least part of the technical training system is now considered to be the worst situation in the world, from now on it could become similar to or even worse than the orange or red zones in Malaysia. In preparation for 2020, I think this problem is going to show up a very large dark side of Japanese society.