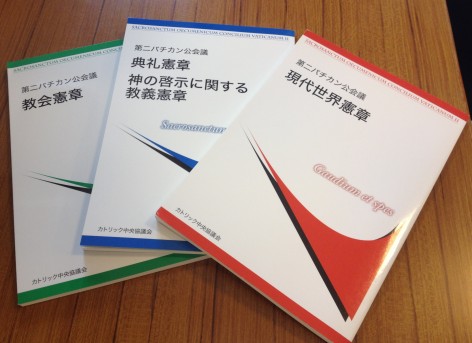 The characteristic of the Constitution on the Church in the Modern World in answering the “aspirations” (hopes and joys) of the modern world rests on its attitude of reflecting on the “make-up of man.” The human person is considered the pivot of all our explanations, from which respect for the person and esteem for human rights arise. It is taught that “peace” becomes its fruit.

Lessons received by the Japanese Church
Paul VI, in his address to the United Nations (October 1965), expressed clearly: “Enough with War! Never again! Only peace leads humanity and nations to fulfill all their goals.” The Pope seriously confronted the problems of peace, quoting John XXIII’s encyclical Peace on Earth. Later, in 1967, he established the Vatican “Commission for Justice and Peace,” and again in 1968, when the war in Vietnam intensified, he designated New Year’s Day as “World Day of Peace” and sent a Peace Message to all Catholics around the world.
I believe that the Japanese Church, learning from the Constitution on the Church in the Modern World accepted Peace as its priority issue. During his official visit to Japan in 1981, John Paul II, who had experienced the tragedy of war, made an impact on the Japanese Church with his “Peace Appeal” at Hiroshima. 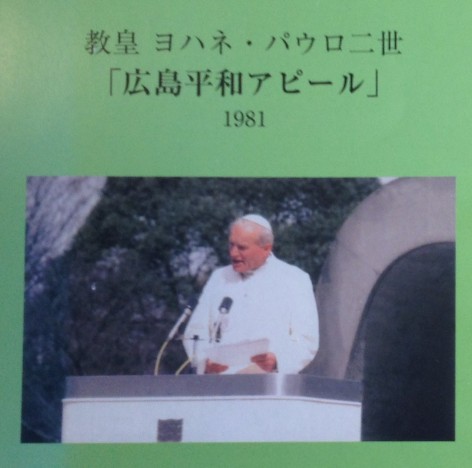 “War is the work of man. War is death. … To remember the past is to commit oneself to the future. To remember Hiroshima is to abhor nuclear war. To remember Hiroshima is to commit oneself to peace. In the face of the man-made calamity that every war is, one must affirm and reaffirm, again and again, that the waging of war is not inevitable or unchangeable. Clashes of ideologies, aspirations and needs can and must be settled and resolved by means other than war and violence… Let us take a solemn decision, now, that war will never be tolerated as a means of resolving differences; let us promise our fellow human beings that we will work untiringly for disarmament and the banishing of all nuclear weapons. …Let us educate ourselves and educate others in the ways of peace.”

Reacting to this Peace Appeal, the Japanese Bishops’ Conference actively began speaking out openly on issues concerning peace and human rights. In 1981, the episcopal committee made a public statement: “Peace and the Japanese Catholic Church – An Answer to the Pope’s Peace Appeal” and two years later, in 1983, published a pastoral letter “Desire for Peace – Evangelization Mission of Japan’s Catholic Church,” in which there is a clear spotlighting on the similarities between the mission of Jesus Christ and the philosophical peace approach of the Japanese Constitution.
Again, in 1995, on the 50th anniversary of the end of World War II, the Bishops’ Conference published the message “Resolution for Peace,” in which they confessed Japan’s war responsibility by “reflecting on the past in order to live in the future.” 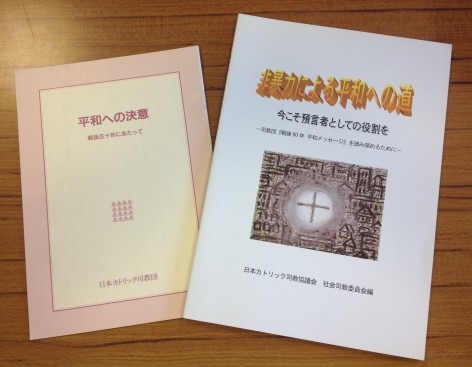 “We Japanese bishops, as Japanese citizens and members of the Catholic Church, remember the tragedies Japan caused during the Second World War and beg forgiveness from God and from all our brothers and sisters of Asia and the Pacific region. Having been involved in that war, we take responsibility for the deaths of over 20 million persons in Asia and the Pacific region. Moreover, we deeply regret the tragic wounds afflicted on the lives of the people and traditional cultures in the region.”
Again, in 2005, 60 years after the end of War World II, the Catholic Bishops’ Conference of Japan published the message “The Road to Peace Based on Nonviolence. –Now is the Time to be Prophetic.” At that time public debates were often being held concerning revision of the Constitution and basic education legislation, visits by Prime Ministers to Yasukuni Shrine, and issues of historical awareness among Japanese people. The message is characterized by its emphasis on the “dignity of human beings,” “reconciliation and solidarity with Asian countries,” “just distribution of wealth and preservation of the environment,” and in a special way the focus is on “nonviolence.” The premise of Catholic social teaching, “respect for the human person,” emphasized as the presupposition for peace, is common to the Universal Declaration on Human Rights and the Japanese Constitution. 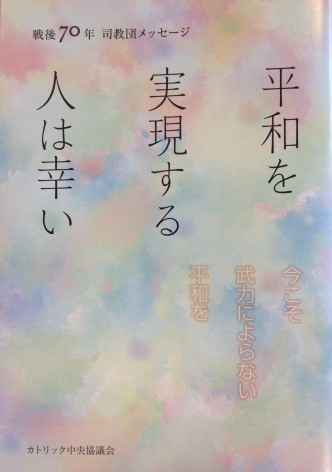 As this year marks the 70th anniversary of the end of the War, the Catholic Bishops’ Conference of Japan sent a message “Happy are those who work for peace – this is the time for nonviolent peace.” As a Church influenced by the Constitution on the Church in the Modern World, we cannot remain silent when confronted by issues of respect for humanity and human life. Following the teaching of John XXIII in Peace on Earth and the Hiroshima Peace Appeal of John Paul II, the Catholic Church in Japan publicly asserts its decision to continue its path of peace and renunciation of war. This, in particular, is our historical mission as Japanese citizens. Additionally, a characteristic of this message is its references to historical awareness and to the danger of destroying Article 9 of the Constitution through the approval of collective defense. The statement also refers to the concrete political situation concerning the public opinion of Okinawa people. Having as background such a critical social situation, the Bishops clearly point to Pope Francis’ insistence on the issues of poverty, income gaps, and the environment.

Actually, a public propaganda campaign is being conducted the world over, with slogans on “active pacifism” based on deterrence and collective defense. But, according to peace scholar Johan Galtung, the Catholic Church has adequately expressed its idea of peace, without waiting for a definition on positive peace as a situation without poverty, oppression, and discrimination—a peace without structural violence.
Peace is neither the absence of war nor a balance of power toward enemies. Nor is it the result of dictatorships. “The product of uprightness will be peace” (Isaiah 32: 17). According to the Constitution on the Church in the Modern World (no.78), peace is the fruit of the order established in human society by its Divine Founder, which humans, always thirsty for increasing perfect justice, must bring to fulfillment. “In the end, a peace which is not the re-sult of integral development will be doomed. It will always spawn new conflicts and various forms of violence.” (Evangelii Gaudium, no.219)
In speaking about “deterrence” in the wake of the Cuban missile crisis, John XXIII asserted, “The production of arms is allegedly justified on the grounds that in present-day conditions peace cannot be preserved without an equal balance of armaments. And so, if one country increases its armaments, others feel the need to do the same” (Peace on Earth, no.110)
According to John XXIII, peace is grounded in TRUTH and in JUSTICE. LOVE is its motivation and FREEDOM its impelling force. The Death Culture that strangles contemporary society has at its base the lack of hope of those in power and triggers a chain reaction of Fear. The words of the First Letter of John, “God is love… In love there is no room for fear” (1John 4:16-18), confront that. I pray that the 70th anniversary of the end of World War II will open a place for love and life in Japanese society.