My Experiences This Past Summer

East Asia & Pacific Jesuit Social Apostolate Annual Meeting
This past summer I participated in meetings in several places. First, from August 18 to 22 I attended the annual meeting of the Jesuit social apostolate of East Asia and the Pacific at Ateneo de Manila University. The theme this year was “Social Entrepreneurship,” in other words, experiments by the poor to form community to helping one another survive.
In rural areas as well as in East Asian city slums models of “new community villages” and “Village Universities” where people can learn have been built up naturally. So have credit unions and various attempts to produce marketable souvenirs by recycling unused goods.
We spent a day visiting the “Enchanted Farm” in Bulacan of the Angat Province next to Manila and the “Rags2Riches Cooperative” run by women of the Payata slum region of Quezon City. We could see how graduates from Ateneo de Manila University prepare for their own future by assisting slum residents to run businesses and help young students of the “Village University” to master English.
The aim of “starting a business” is not just to make a profit but to build communities of mutual collaboration based on Gospel values. I realized again that people need companionship to become happy. In Japan, where markets are controlled by big businesses, the possibilities for such undertakings are met with suspicion, but when I heard reports from Jesuits working with ordinary people in various environments and saw with my own eyes what “Social Entrepreneurship” really is, I changed my mind. I had been “ignorant” of the expression, but I realized that this is what gives people “hope.” 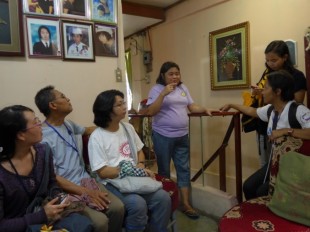 Japan’s Catholic Justice and Peace National Rally
Later, from September 13 to 15, I attended the 38th national rally of the Catholic Council for Justice and Peace in Fukuoka. The theme was “To a society that values life.” This event, which attracted 2000 participants, offered means to foster Christian faith based on justice and peace.
On the first day, as special guest, Bishop Kang Woo-il of the Jeju Diocese, Chairman of the Korean Catholic Bishops’ Conference, gave the keynote address. Bishop Kang began by speaking of last April’s ferry boat accident, which claimed 300 victims, most of them high school students on a school excursion. He explained that the accident clearly manifested inadequate official reactions regarding people’s safety.
South Korea, he mentioned, bears a dramatic history of ideological antagonism with the North, not to mention its past Japanese colonization. Nowadays, confronted with the official policy of building a naval base on the beautiful resort island of Jeju, so much loved by its residents, Bishop Kang, as official representative of the Jeju Diocese, has stood in the vanguard of citizens’ movements opposing the building of the base. The Korean Catholic Church has taken a unified stand opposing the building of the military base, and each diocese sends priests and sisters by turns to the island to encourage the villagers there. Three Jesuits of the Korea Province live in a rented house near the construction site. Bishop Kang questioned the concept of imposing the “State” as an absolute sacred institution and thus actually demanding sacrifices of its citizens. He stressed that the task of Christians is, above all, to make visible Jesus Christ’s “Kingdom of God,” which takes precedence over the State. 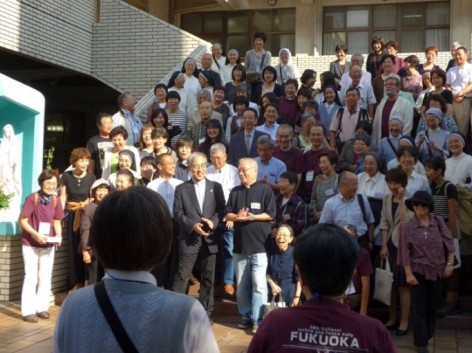 On the second day I visited the Genkai nuclear plant in Saga Prefecture together with members of a study group. The Kyūshū Electric Company seems to be envisioning re-starting operations at its nuclear plants, Genkai in Saga and Sendai in Kagoshima.
We heard the opinions of the local chief priest of Tōkō Temple and Protestant Minister Nakaaki Kido, who have been opposing nuclear plants for some 50 years. Listening to them, I realized again that nuclear plants, never mentioned by the mass media, are simply exhausting the local people living in those areas and are causing unreasonable problems for them. They are irreconcilable with people’s safety.With regard to this issue, the National Justice and Peace Rally decided to form a special working group for the abolition of nuclear plants based on the official stand of Japan’s Catholic Church published by the Catholic Bishops’ Conference on November 8, 2011: “Abolish Nuclear Plants Immediately－Facing The Tragedy of the Fukushima Daiichi Nuclear Plant Disaster.” In this way, a Catholic network for the abolition of nuclear plants was established. 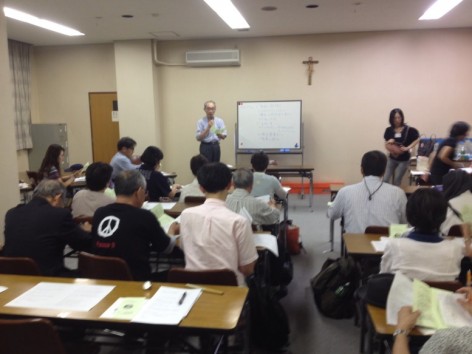 Peace Meetings and Assembly in Jeju Island and Kanjon
Finally, the meetings and public gathering on peace held at Kanjon from September 26 to 28 under the theme “Peace starts with you” were quite moving. These were organized by the Jeju Diocese in cooperation with the Jesuit Research Center for Advocacy and Solidarity in Seoul and the affiliated Jesuit Social Center in Tokyo. This time the host was Bishop Kang, who had delivered the Fukuoka keynote address two weeks previously.
Bishop Tani was also a participant and spoke on problems facing Okinawa, a region in many ways similar to Jeju. According to him, public opposition to moving American military bases to Henoko and Takae brings to light the continued American dominance in Okinawa due to the U.S.-Japan Security Treaty and the Japan-American Convention, despite Japan’s pacifist Constitution. He stressed the need to get rid of such structural discrimination.
Michele Naar-Obed, Catholic laywoman member of a Catholic Worker Movement and North American peace activist, spoke on “practical action born out of faith.” Based on her experiences, she said, “Pacifist non-violent movements oriented toward changes in the world are often a call from the Holy Spirit, the road leading to the Holy Spirit.
Peace is not a situation without conflicts. Since conflicts are always there, we must continue fighting them. But the ways to fight are important and the strength to continue comes from faith. I was able to meet God in the middle of most urgent and hopeless situations.”
According to her, the Pax Americana rooted in military balance will probably collapse, and the important issue is what options will be left after that. Bishop Kang has already provided the answer: Christ’s “Kingdom of God.” With this in mind, the participants at the Kanjon Peace gatherings opposed warships and armaments, authority and war, and the dark forces of death. They showed full colorful human vitality in their sharing and prayers, songs and poems, dances and images, all of which impressed us deeply. In unison with a lively band formed by young people to console the villagers of Kanjon fighting construction of the naval base, people enjoyed dancing and singing lively songs of their own composition together with the band. We realized that, through their joyous companionship with all participants present, they were already winning the fight for peace against the forces of death that threaten them. 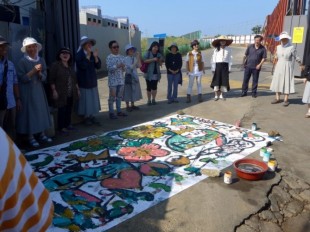