[ KOREA ] PEACE AND THE CENTENARY OF JAPAN’S ANNEXATION OF KOREA

August 22-29 of this year marked the high point of the 100th year since Japan’s Annexation of Korea. This centenary should be considered a fresh starting-point for a peaceful future in Japan and the Korean Peninsula, as well as in the whole of East Asia. The Annexation Treaty was signed exactly 100 years ago on August 22, 1910, under the duress of military oppression, and was promulgated on August 29. During that week, the Residency-General command headquarters abolished all newspapers, suppressed activists for independence, and set up cannons in the Namsan area of Seoul, all of these demonstrating its readiness to confront any opposition from Korean citizens. The signing of this Annexation Treaty marked the culmination of Japan’s official policy to conquer Korea, which dated back to the early years of the Meiji Era, and brought about both Japan’s colonial rule over Korea and its military invasion of other Asian countries. How are we to respond anew to these historical facts today?

Various Events
Not only in Korea but here in Japan, too, various events were held and publicity was given to the centenary of Korean annexation. This was prompted by increasing cultural exchange of people and products, thanks to closer economic ties between Korea and Japan and a surging demand for things Korean. A TV drama inspired by Shiba Ryotaro’s novel, Clouds upon the Hill, is being shown on NHK over a 3-year period.
Shiba’s historical view was, “I hate prewar Japan but I like Meiji very much. The glory of Meiji Japan as a ‘Youthful Country,’ during the time when the samurai spirit (bushido morality) was still alive, was destroyed by Japanese of the Showa Era when the military ran amok with racialist imbecility.” However, contemporary research points out that this view of history overlooks numerous acts of violence during the Meiji Era.
Whether or not Shiba himself had any misgivings about these, he claims that the TV dramatization took a negative stance toward his novel. Perhaps as a justification for its dramatization of Clouds upon the Hill, NHK also broadcast a special series entitled Project Japan, focusing on Japanese-Korean relations. 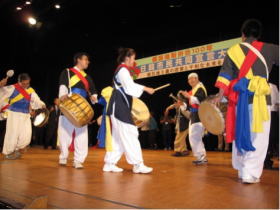 Japanese and Korean historians, too, published an article entitled “The Centenary of Korean Annexation – Joint Statement of Japanese and Korean Intellectuals” (in the journal Sekai, July 2010). They stressed the following three points:(1)“Annexation” was enforced as a result of Japan’s long-standing policy of invasion dating back to the beginning of Meiji. (2)It is a falsification to assert that the Treaty of Annexation was freely agreed to by Korea. (3)The second article of the 1965 Treaty on Basic Relations between Japan and the Republic of Korea says, “It is confirmed that all treaties or agreements concluded between the Empire of Japan and the Empire of Korea on or before August 22, 1910, are already null and void,” but the Japanese government’s failure to recognize the non-validity of these treaties ever since the establishment of the Republic of Korea in 1948 is untenable, and South Korea’s assertion that the Annexation Treaty was an injustice to begin with should be upheld by both sides in common.
As regards the Christian point of view, the Japanese and Korean NCC (Protestant National Christian Conference) made a public statement on August 15, 2010, asserting that “The Christian churches of both Japan and Korea have, along with our own confession of guilt concerning the colonial period, constantly spoken out about past historical facts. Together we admit and confess our sins, and vow with hearts renewed to open up a new era of peace and reconciliation.” The statement also enumerated several communal tasks. The Catholic Church, in a statement by Archbishop Ikenaga Jun, President of the Japan Bishops’ Conference, at the start of the “Ten Days for Peace 2010,” simply said, “On this memorable occasion (of the centenary of Korean Annexation), it is important for us to reflect sincerely on what Japan’s colonial policy was really like and what deep wounds it inflicted on the people. Nor should we fail to consider the Catholic Church’s responsibility at that time.” The Korean Catholic Church remained silent regarding these issues, probably because it realized that it had not sufficiently reflected on its own historical responsibility regarding Japan’s colonial rule and South Korea’s postwar military regime.
On the part of the Japanese government, Prime Minister Kan Naoto issued an official statement on August 10 concerning the centenary of annexation. Among other things he expressed “sincere regret and heartfelt apology once again for the great losses and sufferings brought about by the colonial rule.” The Korean government and the major mass media in Japan welcomed this statement as a “step forward.” However, Korean mass media and citizens’ movements criticized the statement for not mentioning any effective policies for resolving unsettled issues regarding the past colonial rule, such as the legality and validity of the Annexation Treaty, inquiry into the actual situation during that period of colonial rule, apologies and compensation for the victims, Japan’s responsibility for the partition of the Korean Peninsula, normalization of diplomatic relations with the People’s Republic of North Korea, and so on.

August 22: Joint Citizens’ Manifesto, Japan Assembly
On the occasion of the centenary, a general assembly of Japanese and Korean citizens, aiming at resolving unsettled issues and envisioning a peaceful future, was held in Toshima Public Hall, Tokyo. Over 1,000 people filled the hall, dispelling the organizers’ fears of sparse attendance. 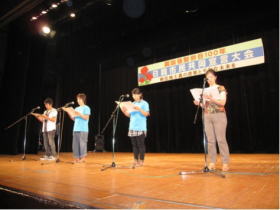 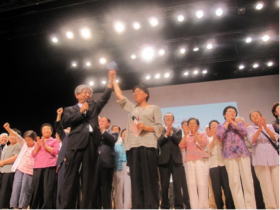 Over 150 Japanese attended these events in Seoul. I, too, went there together with members of the Christian Network to Implement Peace. Taking advantage of a break during the academic assembly, our group visited the Independence Memorial Museum in Cheonan City, a monument built by donations from Korean citizens during the 1980s, when Japanese history textbooks did not acknowledge the fact of Japan’s invasion of Korea. We also visited Cheamri Church, into which, following on the March 1st Independence Declaration, the Japanese military herded 30 young Koreans of the Banzai Independence Movement and massacred them by setting fire to the Church. We were also able to observe the demilitarized zone (DMZ) and hold discussions with other Korean Christians engaged in peace movements.
Mr Arai Shinichi of Japan and Mr Kang Mangil of Korea delivered keynote addresses at the international academic assembly. Then, on two consecutive days, Japanese and Korean researchers and specialists made presentations, and discussions were held on four themes: damages sustained, resolution of unsettled issues, peace, and the future. In his keynote address, the famous Korean historian, Kang Mang-il stated that in the past century, both the people that enforced their rule on another people belonging to the same cultural region and the people so ruled have the obligation as world citizens to contribute to world peace in a peace-oriented 21st century. A prerequisite condition for achieving that is thoroughgoing self-examination and resolution of unsettled issues. However, Japan has not yet reflected on its 20th-century invasions and continues to turn its back on Asia. If Japan would open up again to East Asia, it could also contribute to peace on the Korean Peninsula.
A strong rain continued to fall on August 29. The Japanese participants first went to see a special centenary exhibit at a historical museum now located on the site of the former Sodemun Prison for opponents of Japanese imperial domination. Later they attended the unveiling ceremony of a monument commemorating the enactment of the Enforced Annexation Treaty at the site of the old Residency-General command headquarters at Namsan.
This site had also been occupied by KCIA headquarters during the Korean military dictatorship and was considered a fearsome place by South Koreans, but a large international youth hostel has been built there and now it is a locus for encounters among youth from various nations.
Despite the heavy rain, some 300 people, including Japanese and Korean Diet members, citizens, and students, participated in the exciting opening ceremonies. These ceremonies concluded with three banzai (mansei!) cheers intoned by the chairman of the Seoul City Council, which may have sounded like banzai shouts of the 1919 Independence Movement, but they did not echo with hatred for the past. We got the impression that they were cheers for having overcome colonization and for peace in East Asia. The Korean name for the day the Annexation Treaty was signed is the “Day of National Shame.” For Japan, too, it was indeed a “day of national shame,” the day when Japan began oppressing its neighbor, only to consign this history to later oblivion without any forward-looking self-examination.
At the closing ceremonies in Sungkyunkwan University, a group of high school girls, to the accompaniment of gong and drum, performed samulnoli and pansoli songs recalling the feeling of the so-called “comfort women.” After greetings from various distinguished guests, joint statements were read out by young students and a Japanese-Korean citizens’ group. What made a big difference from the Japan Assembly was that the citizens’ groups announced plans of action for their various areas of activity. I felt that the representatives were openly sharing with everyone their decisions for implementing their objectives. The day ended with Japanese and Koreans smiling and singing together and joining hands in dancing. Although it was a gathering of only a few hundred persons, I saw in it a prophetic representation of what Japanese, Koreans, East Asians, and people from all over the world should become.

Learning from our Neighbors
Thus, I was fortunate enough to be able to spend the last week of August looking back over a sad past together with our neighbors and speaking with them about the future we face and the ideals we want to promote. If Japan continues to hide historical facts or avoid sincere encounters, relations between our two countries and their citizens will naturally remain superficial. Facing up to and repenting of our past mistakes with humility can bring consolation and hope, and contribute to a renewal of good relations. As for us Japanese, who have not undertaken adequate self-examination, I believe we can learn much especially from the courageous desire and action for freedom and justice which the Koreans patiently forged through long years of oppression. As a Christian, I want to learn from the Korean people’s purity of heart, which can be seen as deeply rooted in their character and which enables them to overcome “hatred” and transform it into “forgiveness.”