Let’s Get Liberated from the Dark Power of Nuclear Society

Introduction
World history reached a turning point on March 11, 2011. A widespread movement toward the abolition of nuclear energy surfaced clearly in all corners of Japan. However, the power of the present system (government, nuclear companies, official departments and pro-government scholars) is great and the darkness is deep.

My Involvement in Nuclear Issues
At the time I was sent to Micronesia by the Japanese Mercedarian Congregation, there was an official delegation from Japan in the region trying to persuade the people of the islands to accept a Japanese program for open-sea disposal of radioactive waste from Japan’s nuclear plants. This was the beginning of my involvement in nuclear issues. Famous politicians like Kishi Nobusuke and Nakasone Yasuhiro devised various schemes. Officials and scientists from the Science and Technology Agency urged the population to approve the program, claiming that nuclear waste was safe and that Japan, being a land of earthquakes and volcanoes, could not safely store nuclear 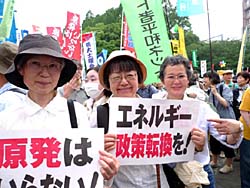 waste. The Micronesians got angry. “The ocean is our mother, our life,” they said. “It’s not a nuclear cemetery. If nuclear waste is so safe, why don’t you bury it in Tokyo Bay or in the Imperial Palace grounds? If Japan has so many earthquakes and volcanoes, why do you continue building nuclear plants?”
Popular opposition was strong and I was deeply influenced by it. The movement continued throughout 13 years and finally it succeeded in annulling the plan to establish a nuclear cesspool in the Micronesian islands. During all this time I learned many things and I felt scales fall from my eyes. I saw that nuclear reactors had been built on threats, concealed truths, lies, power, and money.

August 9, 2011
NHK broadcast a special TV program on “The dropping of the atomic bomb ? best-kept information” to commemorate the 66th anniversary of the end of World War II. I watched it in amazement. I had never seen it and again scales fell from my eyes. How could it be that headquarters had not been able to gather from messages codes that the USA was preparing to fly from Tinian to drop an atomic bomb and how could it not read the moves on the morning the bomb was dropped? Nevertheless, the information was shelved somewhere. In addition, the air raid alerts did not function and the citizens of Hiroshima and Nagasaki, unaware of the danger, perished dramatically. If they had known, they might have found shelter in air-raid holes.
These were my reflections, but what did headquarters really do? When the leaders met in the morning that very day, their discussions centered on how to end the war and their interest was to avoid becoming war criminals once the war was over.

Today 66 Years later and after the Catastrophe of March 11, 2011
We are again in the same situation. Information about the nuclear accident was hidden from us.
All sorts of maneuvers were created to maintain nuclear plants. The government, without questioning the responsibility and evil of the Tokyo Electric Power Company, enacted legislation to be able to raise the cost of electricity and to increase taxes so that the public would cover the damages occasioned by the accident.
”Why didn’t anyone instruct us about the radioactive clouds over our heads? While we were waiting outside for water deliveries or were shoveling snow, radioactive clouds were passing over our heads. We became hibakusha. We were dumped. We realized that the country did not care for its people.”
The complaints and anger of the people of Fukushima still echo within us.
Although the establishment knew about the high radiation level of the radioactive clouds that hit the population because of wind shifts on March 15, 21, and 23, they did not inform the people. The report concerning how to deal with the accident was presented with blacked-out sentences. It lied about the radiation, stating that the level of radiation was not injurious to people’s health. They still insist on that today.

Truths that the National System Hides
In reality, the Fukushima nuclear accident demonstrates the fragility of nuclear reactors. Even before the tsunami hit the plant, the nuclear reactor’s core structure and plumbing had been damaged by the earthquake, leading to a loss of coolant mainly in the no.2 reactor. At the same time, through reports from scientists, we know that the no.3 reactor used plutonium as fuel, because plutonium was found scattered in the pool of used fuel.

Lies about Nuclear Reactors
All the more, public lies continue, such as if nuclear reactors were abandoned, the electricity supply would 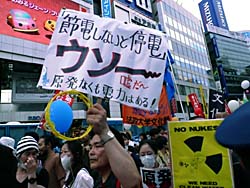 be inadequate, or nuclear produced electricity is cheapest and is the best way to avoid global warming. Lies like these continue to appear in the mass media even now. People are not told that the quantity of deadly nuclear waste ejected by one nuclear plant is equivalent to that of 4 atomic bombs similar to the one dropped on Hiroshima.
A year before the March 11 disaster, the Catholic Justice and Peace Commission formed a special team to draw up a leaflet on the problems concerning nuclear reactors. When we began working on it, our main concern was to explain in simple ways, based on true facts, the lies that were being spread regarding nuclear plants. We invited Professor Koide Hiroaki of the Kyoto University nuclear energy laboratory, who is the most respected nuclear scientist in Japan, to supervise the content of the leaflet. He put his whole heart into the endeavor and, thanks to his services, after a year we were able to publish the result in a concentrated B3 format. The leaflet said, “Nuclear plants are not the trump-card solution to global warming! They are the worst option for life environment on earth!” It was first published at the end of the year 2010. “The fact that the Catholic Church published this leaflet is going to make an impact much greater than you expect,” Mr. Koide said. The team working on the leaflet wondered about this, but right after its publication demands for it flooded in from Catholic connections as well as from outside. These increased notably after March 11. Mr. Koide’s prophecy came true. Up to now, 110,000 copies have been sold and an English translation is now being prepared.

Japanese Bishops’ Message: “Abolish Nuclear Plants Immediately”
On November 8, 2011, the Japan Catholic Bishops’ Conference issued an urgent message: “To all residents in Japan. We call for the immediate abolishment of all nuclear power plants in Japan.” The issuing of this statement was a major event.
On September 19, the following appeal, among many others, was heard at a national rally of over 60,000 people from Fukushima. Let me quote the words of Muto Ruiko: “Humans are just one among many other kinds of living creatures. Are there any creatures other than humans that are able to destroy their own future? I really think that if everyone thinks seriously, they will discover the real facts, decide on possible actions, and act accordingly. Let’s remind ourselves that each one of us possesses such potential. … Confronted with the huge vertical wall of those in power who plan to maintain nuclear energy, our strength is to continue increasing our horizontal links.”

Christmas 2011
We Christians have received an urgent call to “Abolish immediately nuclear power” and should give a determined response. Standing on this earth that we have sadly contaminated, let’s ask forgiveness from the children of future generations for shouldering them with all the pollution we have produced.
If Jesus were to live among us today, what action would he take? Take a look at my prayer.

Prayer after the March 11 Disaster

We are alive, shouldering the wounds of sorrowful hearts without any hope. In the midst of our sadness, the risen Jesus offers us the challenge of his living Spirit.

Fighting the devil, Jesus liberated many people. The name of the devil was “Legion.” “Legion” means the armies and mass organizations that lead people to death. Jesus is the liberator of people. He gives them hope in the midst of their sorrow. He heals those who are exhausted and accompanies them in their grief. Jesus, dying on the cross, angrily defied pro-system religious leaders and scientists and those interested organizations that built temples of pure economic profit. 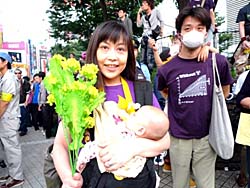 When Jesus sent out his disciples, he warned them that they were sent out as “sheep among wolves” and told them to be wary of wolves that have the appearance of sheep. The disciples of Jesus are called to live according to their personal challenge, so as to search for unexplored ways and not simply follow the social current.
Our profession of faith consists in living in communion with the God of Jesus, to live liberated with Jesus.
The God of Jesus is God present in all creation, incarnated into living things as the source of life, the “fragile God” accompanying those suffering in their distress, the afflicted and silent God in a land polluted with nuclear radiation.
God, please forgive us.
The least we can do is to follow in the steps of Jesus. Lord, accompany us and give us your Spirit and Wisdom so that we can liberate the children of future generations from the oppressive and unjust systems we have built. AMEN.