The Homeless Of Shibuya 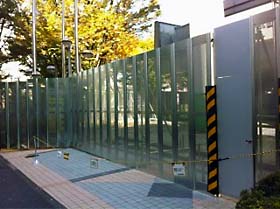 Fourteen years ago, when I was a student, I used to get the train at Shibuya station (Tokyo), a place where homeless people set up their shelters. Gradually, I got interested in their problems. On my way to work these days I pass through the same station, where I can still see many homeless people. In fact, I have always had great interest in the slum communities of Asian countries, but ever since the homeless of Shibuya caught my eye, I have felt the need to become involved in the issues of the poor here at home also.
Some 16 years ago, an organization called “Nojiren,” specializing in the situation of homeless people living in Shibuya, was established and I took part in their activities. From the start its most important task was to secure sleeping area at the entrance of a public Children’s Center in Tokyo. As the result of often violent negotiations with the administration of this Center, any homeless unable to find a shelter was allowed to sleep with the others under the broad roof at the entrance of the Children’s Center after office hours, from 9:00 p.m. to 5:00 a.m. Of course, the conditions were inconvenient, the roof was outside the building and they had to set up their area every evening and clear up the site early the next morning. But at least they would not get wet on rainy days and in some respect could sleep peacefully without being harassed by youngsters and other passersby (mainly guard men and police). In this way they were able to establish new community relationships with the others. Thus, it was quite important for them to maintain access to that site. (Cf. Bulletin numbers 89-90) 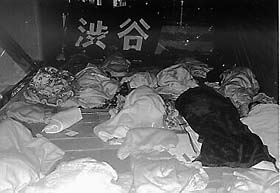 Nevertheless, the place was firmly closed off on November 1 last year and nobody can sleep there anymore. People were told that the outer walls of the Children’s Center needed earthquake-proof repair, but there was not any outer wall that needed repair at the entrance of the Center. In fact, 5 months have already passed and no work has been done at the entrance of the building, which shows that the main purpose had been to expel the homeless people so that they could not use that place during the night.
Quite differently from 14 years ago, many citizens’ groups and churches now show interest in the issues of homeless people. Nevertheless, the main focus of interest seems to be immediate assistance, like distribution of food, requests for social-welfare aid and assistance for self-support. Of course, applying for social welfare could be a way to rectify unjust handlings by administrative authorities and helping to support the self-help of homeless people is very important. But actually Japanese society is creating more and more new homeless and not many of them are able to become independent merely by following the orientations given by the administration and aid organizations. Reflecting on the present situation, would it not be very important to organize places for all homeless people to stay, places for them to sleep and at the same time to help to build living communities where the homeless themselves could assist one another? (It would also be important to promote social reforms so that the number of homeless people will not increase.)
The “gratuity of God’s love” is a basic Christian characteristic. God loves people as they are and unconditionally, no matter who they are, and not because they have done well. In other words, even people who are weak and have many defects are loved by God and accepted by Him as they are. I believe that this truth is directly connected with our social realities. In today’s world any homeless person should be able to remain in any place and find a place to sleep.
Nevertheless, lately, the waves of urban development under the initiative of the market mechanism promoted by big companies, especially in macro-urban centers, engulf them. The market system disposes of all useless things and becomes a strong mechanism for efficiency, so much so that products considered without market value are clearly dispensed with. The urban renewal of Shibuya Station, fed by private capital, led to the removal of people who had been able to sleep in front of the Children’s Center, as mentioned above. And again it was linked to the removal of tens of homeless people from Miyashita Park a year ago, when the Nike Corporation bought the rights to rename Miyashita Park.
Since the end of March there has been a movement of strong protest against the forceful eviction of homeless people by the Department of Communication and Transport and the Kōtō Ward Office on the occasion of the May 22 opening of the “sky tree” in Sumida Ward (Tokyo) and the urban renewal of its surroundings. The eviction sites are the riverside at Tatekawa Park in Kōtō Ward and the Arakawa Horikiribashi in Sumida Ward. In Shibuya the tide of renewal is also intensifying with the opening of the commercial station building, Hikarie, and the plans to link the underground center and the Tōyoko railroad lines this year. It is expected that the fight to secure a place for the homeless in Shibuya so that they can sleep in the open will intensify.
Urban renewal might be a social need, but is it good to give the green light to such development, when in the process homeless and poor people are evicted and deprived of the places where they are presently living? Society tends to reduce waste and pursue greater efficiency. Destroying places where people, for instance homeless people, can find shelter seems like depriving Jesus of a place to live and of a time to pray in the name of greater efficiency.