FROM THE CATHOLIC WORLD(166)

＜Latest figures on world’s Christian population＞
(UCA News, July 16th)
A comprehensive demographic study of more than 200 countries finds that there are 2.18 billion Christians of all ages around the world, representing nearly a third of the estimated 2010 global population of 6.9 billion. 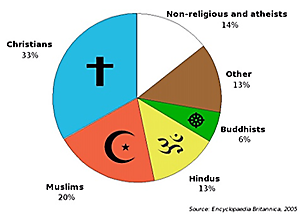 The number of Christians around the world has nearly quadrupled in the last 100 years, from about 600 million in 1910 to more than 2 billion in 2010. But the world’s overall population also has risen rapidly, from an estimated 1.8 billion in 1910 to 6.9 billion in 2010. As a result, Christians make up about the same portion of the world’s population today (32%) as they did a century ago (35%).
Christianity has grown enormously in sub-Saharan Africa and the Asia-Pacific region. The share of the population that is Christian in sub-Saharan Africa climbed from 9% in 1910 to 63% in 2010, while in the Asia-Pacific region it rose from 3% to 7%.

＜India: Catholic Church Calls for Peace in Assam＞
(Vatican Radio, July 26th)
Assam, one of the north-eastern states remained cut-off from rest of the country as violent clashes broke out between the Bodos and the Muslims rendering 200,000 people homeless. As the leaders of both the communities levelled charges on each other and the inaction of the administration, the rioters went about on a killing, burning and looting spree.

＜Mongolia’s Church celebrates 20th anniversary＞
(Fides, July 7th)
The Catholic Church in Mongolia has grown from zero to 800 members in 20 years. The anniversary was celebrated with a special Mass at the Cathedral of Ulan Bator. After the fall of the communist regime in 1991 there were no Catholics in Mongolia. In 1992, the first ‘Missino sui iuris’ was established (Mongolian Church is now an apostolic prefecture.) and diplomatic relations between Mongolia and the Holy See were established. That year three pioneer missionaries arrived in the country. By 2006 there were about 600 Catholics, including 350 native Mongolians. Today there are 81 missionaries from 22 different nationalities and 13 religious institutes. Two young Mongolians are now training for the priesthood in South Korea, at the Catholic University in Daejeon.

＜Cyprus: Christian Churches Ransacked＞
(Zenit.org. August 21st).
Many Christian churches in the Turkish-occupied part of Cyprus have been desecrated and transformed into storage facilities, museums or even mosques.The archbishop of the Church of Cyprus, His Beatitude Archbishop Chrysostomos II, told the 33rd Rimini Meeting that 120 Christian churches have been affected and that the artworks in the churches have also been confiscated and sold. He further added that Cyprian Christians have also suffered from a lack of religious liberty and have suffered attacks.

＜The Philippines Celebrates the 5th Centenary of Arrival of Catholicism＞
(Zenit.org, July 12th).
Looking towards the celebration of the fifth centenary of the arrival of Christianity to the nation, the Catholic Bishops Conference of the Philippines (CBCP) released a pastoral letter on Era of New Evangelization. While treading the history of the first Christians baptized in the Philippines, the bishops recalled that the canonization of Pedro Calungsod, a Roman Catholic missionary from the Philippines who was martyred in Guam in 1672.

＜Pakistani Christian girl detained on accusations of defaming Islam＞
（Reuters, August 23rd)
– Rimsha Masih, a Pakistani Christian girl is accused by Muslim neighbors of burning Islamic religious texts. The case has put another spotlight on Pakistan’s anti-blasphemy law, which rights groups say dangerously discriminates against the conservative Muslim country’s tiny minority groups. Under the blasphemy law, anyone who speaks ill of Islam and the Prophet Mohammad commits a crime and faces the death penalty, but activists say vague terminology has led to its misuse. Masih’s arrest triggered an exodus of several hundred Christians from her poor village after mosques reported over their loudspeakers what the girl was alleged to have done.

＜Japan Police ‘will respect religious freedom’＞
(UCA News, July 19th)
On May 27, Pentecost Sunday, Japanese police entered Kaizuka Catholic Church in Kawasaki City, Kanazawa Prefecture without a warrant to investigate and arrest a worshiper there on immigration charges. The incident sparked protests both in Yokohama diocese and at the national level. In response, the National Police Agency (NPA) has contacted stations across the country through an official notice calling for respect towards religions and for all other human rights. It also demanded that such an incident should never be repeated. In a letter dated July 12, NPA chief superintendent Yasuhiro Shirakawa replied to Archbishop Ikenaga, informing him that he had discussed the matter with the NPSC and, upon consideration, had issued this formal notice to police forces nationwide.