Christians up by 1 per cent In Nepal’s first census (Vatican Radio) November 27, 2012:
Nepal’s Christians are growing in numbers. In ten years, they went from 0.4 per cent to 1.4 per cent in the country of 26 million, according to the latest census released by the Maoist-controlled government on November 28. Hindus grew from 80 to 81 per cent. Muslims remained the same at 4.4 per cent. Buddhists declined instead from 10.7 per cent to 9 per cent. Nepali Prime Minister Baburam Bhattarai who unveiled the study said in his address, that no religion should use the results to ask for privileges.

Attacks against Christians in Nigeria (L’Osservatore Romano) November 27, 2012:
Two car bombs detonated by suicide attackers exploded in a church in a military compound in Jaji, north of Nigeria on Sunday, November 25, killing at least eleven people and injuring dozens. The tragic rite of many Sundays has thus been repeated in northern Nigeria, for too long in the grip of the terrorism of the Islamic fundamentalist group, Boko Haram. Sunday’s target was the Protestant Church of St Andrew’s in the barracks of Jaji of Kaduna State. It’s reported that the majority of the victims belonged to the church’s choir.

Laws Penalizing Blasphemy, Apostasy and Defamation of Religion are Widespread (pewforum.org) November 21, 2012:
Several recent incidents have drawn international attention to laws and policies prohibiting blasphemy ? remarks or actions considered to be contemptuous of God or the divine. In a highly publicized case last summer, for example, a 14-year-old Christian girl in Pakistan was arrested and detained for several weeks after she was accused of burning pages from the Quran. In neighboring India, a man reputed to be a religious skeptic is facing blasphemy charges because he claimed a statue of Jesus venerated by Mumbai’s Catholic community for its miraculous qualities is a fake. The man reportedly is staying in Europe to avoid prosecution. In Greece, a man was arrested and charged with blasphemy after he posted satirical references to an Orthodox Christian monk on Facebook.
A new analysis by the Pew Research Center’s Forum on Religion & Public Life finds that as of 2011 nearly half of the countries and territories in the world (47%) have laws or policies that penalize blasphemy, apostasy (abandoning one’s faith) or defamation (disparagement or criticism of particular religions or religion in general). Of the 198 countries studied, 32 (16%) have anti-blasphemy laws, 20 (10%) have laws penalizing apostasy and 87 (44%) have laws against the defamation of religion, including hate speech against members of religious groups.

Arrests of Christians Spike in Iran (persecution.org) November 29, 2012:
Reports of Iranian authorities arresting Christians for their faith are pouring in, indicating that the Islamic nation is running a massive campaign targeting house churches. Officials from Iran’s Cyber Police force raided the home of a Christian convert woman in the northern city of Gorgan, the capital of Golestan Province, Mohabat News reported on Nov. 16. In October, seven Christians from the Church of Iran were detained during a raid by security personnel in a city of Fars Province, Mohabat reported. 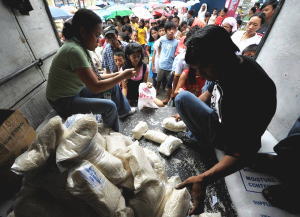 As thousands of Philippine families remained in shelters, Catholic Relief Services and Caritas Philippines prepared to speed household supplies and water to eastern sections of Mindanao affected by powerful Typhoon Bopha. It is reported that packing 120-mph winds and torrential rains as it made landfall on the country’s southern-most island Dec. 4, the storm left at least 300 people dead and hundreds more missing.

Pope calls for world authority as ‘moral force  VATICAN CITY (CNS, Dec-3-2012)
The world authority envisioned by two popes as a way to ensure global peace and justice would not be a superpower, but primarily a moral force with limited jurisdiction, Pope Benedict XVI said in the Pontifical Council for Justice and Peace on Dec. 3. “New ideologies?such as the hedonistic and egoistic one of sexual and reproductive rights, or that of a disorderly financial capitalism that transgresses politics and dismantles the real economy?contribute to make the employee and his work seem ‘minor’ goods and to undermine the natural foundations of society, especially the family,” he said. In his address, Pope Benedict recalled that Blessed John XXIII had called for the “construction of a world community, with a corresponding authority,” to serve the “common good of the human family.” The pope also cited his own 2009 encyclical “Caritas in Veritate,” in which he called for a “true world political authority” to ensure international cooperation, peace and environmental protection.