I met Pope Francis with his unextinguished torch 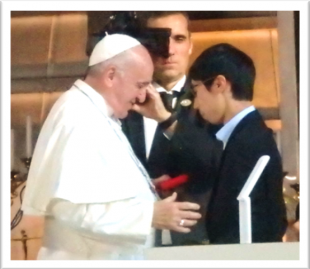 A visit of a Pope after 38 years! I have the impression that the arrival of Pope Francis undoubtedly brought great joy to the Church in Japan. During his stay, SNS news broadcasts brought the aura of Pope Francis to everyone near me. But why did that happen at this particular time?

My parents were in their twenties when Pope John Paul II visited Japan. They were younger than I am now. There were certainly many young Japanese Catholics at that time, but at present, most probably in almost all dioceses and parishes, there are fewer priests and the faithful have become older. Now there is a sense of crisis, as if the Japanese Church will not be able to continue to exist. Nevertheless, is this merely a problem regarding the Church? More likely we can say that we are living at a time when, in many regards, society’s continued existence itself is threatened.

At first sight, Japan seems to be a safe and peaceful country. But in the shadow of that “peace,” the agonized cries of those who are deprived of the energy to speak out echo loudly. Many have been robbed of even the possibility of being able to recognize the agony of death. Suicides arising from bullying and solitary deaths are no longer unusual. Existing discrimination and the abandonment of weak unskilled workers, including foreign laborers, and unjust practices against the poor and the powerless prevail. “To Protect All Life,” the motto of the Pope’s visit, is not unrelated to the existing structures and values of Japanese society, which denies any equality in the existence of “Life.”

The expansion of market mechanisms has swallowed the whole world and awesome respect for life has been converted into empty words. A desert inside and outside human society has spread at a tremendous impetus. Youth living within that desert do not develop their human personalities as such and are compelled to succeed and grow toward self-realization within a social framework imposed by the labor market. They suffocate there. From childhood they become addicted to medicines advertised falsely. The ability “to believe” is stolen from them and, living as they do in an ambient of speed and productivity, they are hard put to find time to cultivate their sensibility and enjoy their lives.

This is the world the Church exists in. The present Pope reflects more strongly than other world leaders on the situation of the world, and with a broken heart. The impression I had of him was one of tenderness and warmth and, together with his quietness, his body showed signs of sadness. Because he is a pope, his words sometimes sounded like those of a politician, but they were totally different in color from those of politicians.

His coming to Japan at this time was probably meant to bring the light of a new torch to a “Church growing old.” Keeping the flame of that torch alive in our hearts, we must live in a “society growing old.” The light of that torch gives the hope and energy needed to continue working at respecting “life,” regardless of whether Japan or maybe the world maybe facing their end.

I felt that I “saw” the hope of a Pope really living in that future world. His appearance was that of a “pilgrim” travelling together with Christ in a world he himself had introduced. Encouraged by his image, I too want to continue my journey.