To the funny clergyman, Manolo who does good deeds, thank you

Then said he, Unto what is the kingdom of God like? And whereunto shall I resemble it? It is like a grain of mustard seed, which a man took, and cast into his garden; and it grew, and waxed a great tree; and the fowls of the air lodged in the branches of it. (Luke 13: 18-19) 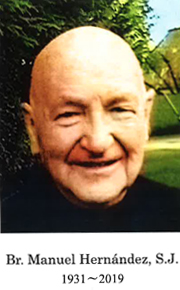 On November 28, 2019, at the Society of Jesus Kami-Shakujii Residence, Br. Manuel Hernandez Montesinos SJ took his last breath peacefully due to cardiac failure. He was 88 years old.

Being a small “mustard seed,” Br. Hernandez became a “tree,” and allowed us people with worries, “birds of the sky,” to create a nest in those branches and take a rest.

Br. Hernandez, how impressive! He did not either have an outstanding academic background nor an outstanding business title, but many people came to his funeral. It is the power of the heart. He was a heartfelt person.

The heavens must have become lively. We can imagine Br. Hernandez slapping St. Pedro’s shoulders saying, “Hey, St. Pedro. How are you doing?” The heavens are surely busy right now.

However, the people down on Earth are in sadness. The Spanish song Fr. Artillo quoted in his homily during the funeral wake expresses our sadness, “When our friends leave us, something in our soul breaks.”

The person who is mourning the most is probably 99-year old Br. Marco. They were very good friends. The two enjoyed taking walks together, and they would sometime come home separately, after having a quarrel during their walk. People from Zaragoza are said to be stubborn, and Br. Hernandez was truly a person from Zaragoza.

However, we can no longer hear the real voice of Br. Hernandez. It is hard to believe. Speaking of “voice,” the following happened. Two days before he passed away, Pope Francis visited the SJ House, and held a mass with members who are brothers, and had breakfast together. When I was about to take my plate, someone from behind pushed me and yelled, “Get out of the way!” When I looked behind, it was him. In a good sense, Br. Hernandez was in good shape. In a bad way, it’s his usual self that doesn’t see improvement. However, this came to be the last time I heard his voice. His last words that I heard from him, those valuable words were, “Get out of the way!” 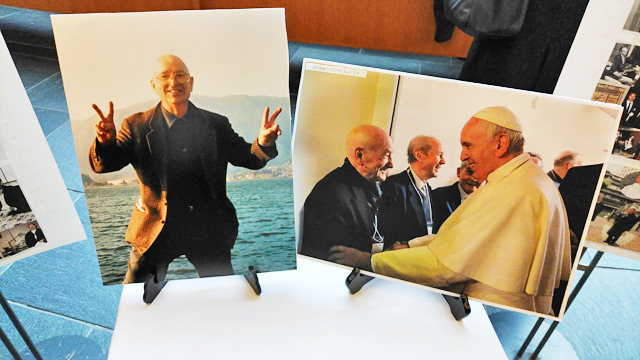 By the way, Manuel’s nickname was “Manolo.”

This was on November 15. Every Friday from 7:30 AM, a morning prayer meeting is held. On this day, Br. Hernandez was the guest speaker, and talked about the following things. “We do not know when death will come. We have to be ready for it. We have to be ready to make people feel deep joy. When I was younger, I was a playboy who had lots of fun. However, one day, I saw a blind woman, and I took her hand to guide the way. She could smell the chorizo sandwich my mother had made for me, and said, ‘You have something smelling nice there.’ I said, ‘Are you hungry? Here,’ and handed her the sandwich. When I saw her break into the most joyous expression on her face, I became extremely happy too. The joy I felt then was different from all the fun I had playing around. This joy that I felt taught me that this is my path of life, to make people in need experience deep joy. This is why I joined the Society of Jesus. I wanted to become a Brother, not to become a priest, but to help others. Just like Jesus who had been a carpenter for 30 years…”

In other words, the quality of joy became his principle of life. After Br. Manolo came to Japan, he spent 20 years doing jobs in the kitchen and in the boiler. Theological students aiming to become priests had access to a two-year Japanese language school, but Br. Manolo did not have that resource, so he spent his breaks between work studying Japanese on his own.

Br. Manolo was called by Fr. Cangas, the pastor at that time, and came to St. Ignatius Church. He worked 34 years in the sacristy, helped out with funerals and weddings, helped pray the way of the cross and the Rosary, and did many more Church activities. He continued to work together with people who came to his room. In addition, he would wake up at 4:30 AM every morning, and unlock the gate and all doors of the church. He did this in rain and in snow.

During morning masses, he was the acolyte and the reader, and would read parts from the Bible with his good Japanese. In fact, he would alter difficult Japanese words on his own, and adapt them to his interpretation. Participants of the mass probably have wondered whether those words were of Paulo or of Manolo.

Pope Francis recommends us to, “Go outside. Become a shepherd who smells like sheep.” Manolo spent over 50 years going to outside prisons, and many people from outside the church came to visit him. As a chaplain of prisons, he was well liked and loved by chaplains of all religions. Many prison staff and chaplains came to his funeral wake and funeral, and mourned his death. In fact, many inmates wanted to go to his funeral too, but they had their reasons that stopped them from attending.

As I am also a chaplain, Br. Hernandez often inquired to me the following. “Prisons have masses. Inmates like to participate in masses, and it helps them, so please continue what you’re doing.” In other words, he cared about the inmates more than his activities as a chaplain. He was not focused on himself, but rather focused on the growth of the inmates. This is a difficult thing to do. Pure love seeks not the “I” helping others, but others being helped. Br. Hernandez was a pure person.

Not knowing fear, Manolo was a person who went beyond everything. He was beyond social status, fortune, and titles. He accepted people in a high position, as well as vulnerable people equally. A famous composer and orchestra conductor, Mr. Yamamoto Naozumi was baptized through Br. Hernandez’s guidance. Br. Hernandez welcomed even the extremely poor with the same warmth. This is indeed, the same thing Jesus Christ has done.

“When our friends leave us, something in our soul breaks.” Manolo is currently happy. We can meet him again. Jesus told us that the same person can exactly live again in a different appearance and state. In a state that we cannot imagine, Manolo is definitely happy now. He is surely handing out candy to small angels. We can meet him doing these things again.

Lord, please be good to Manolo. And, Manolo, please watch over us. Lord, thank you for allowing us to meet this tremendous person. Br. Hernandez, thank you for being with us, and being our friend.

There is another “thank you” I want to say. These words are the overall evaluation of Manolo’s life. When he passed away, Jesus welcomed him with these words. These words are from Jesus Christ’s words, who was Manolo’s everything. “Thank you, Manolo!” This is it.

Then shall the King say unto them on his right hand, Come, ye blessed of my Father, inherit the kingdom prepared for you from the foundation of the world: For I was an hungred, and ye gave me meat: I was thirsty, and ye gave me drink: I was a stranger, and ye took me in: Naked, and ye clothed me: I was sick, and ye visited me: I was in prison, and ye came unto me. (Matthew 25: 34-36)