Twelve years ago, when I left the Jesuit Novitiate, I never imagined that one day I would write an article for this Social and Pastoral Bulletin.

I was born in Aichi Prefecture and grew up in an ordinary family where Christianity or other religions didn’t matter. Rather, “social position,” “honor,” “academic background” and “property” were the barometers of happiness, and these values were implanted in all of us as good values to live for.

I was a social dropout. On entering kindergarten, I felt that, however long I would be there, I would never be able to do what every child could do. Small girls called me “coward.” There was nobody to whom I could confide my sad feelings and I grew up without understanding what happiness means.

Even after entering a regional university, I had no confidence in myself and let an unseemly life, looking down at society from above, convinced that “everyone is the same as me.” All my friends had a boyfriend or a girlfriend, but there was nothing like that for me. I hated the people around me and even hated myself.

In the midst of that situation, I happened to attend, by chance, a basic seminar on penal law, during which Professor Akiba Etsuko, who was in charge of the seminar, brought up the suggestion “Let’s go to Rome.” That was in the year 2000. There must have been some reason for the professor to suggest this. She explained: “Father Pittau, who looked after me previously, is in Rome now as an archbishop. He is Secretary of the Vatican Congregation for Catholic Education. Let’s go to meet him.”

When I heard that, the first thought that came to mind was “He’s a director of something. Most probably he’s a hypocrite.” But at the same time, the following cunning idea came to mind: “If I decide to meet him, I might establish some new connection for my future.” Thus, I decided to go to Rome.

When we arrived at midnight at the airport, Archbishop Pittau was standing there. There he was, all by himself, without anyone that looked like armed bodyguards. He was all smiles, shaking hands with the students one by one, “I’m glad you could come. Welcome to Rome!” I was struck to see him looking at me and to feel his warm hands. I burst into tears, unconsciously.

I understand now why I burst into tears. I felt the call of Jesus telling me, “Yokoi, you survived well up to now. I was waiting for this moment to meet you.” I couldn’t believe that two years after my return to Japan, I would be baptized by Archbishop Pittau.

Then, four years later, I entered the Jesuit Novitiate. Even then I still could not get rid of the “tendency to compare myself with others” which had tied me down as I struggled to be happy and sad at times. In November, the novice master instructed me to go to the L’Arche Kana-no-Ie (Cana Home, L’Arche Community in Shizuoka Prefecture) for my hospital probation, the institution where I later knocked on the door to join their community.

I stayed there for one month, and from the first day I realized the merits of being there. The Cana Home calls those using the facilities who are unable to talk “companions” and the staff are called “assistants.” I have the impression that I did not hear things like “I’m glad that you are here at my side” or “I thank you for coming.” Before my experience there, I was all worried about things like, “Will they accept me?” “Will I be able to end my probation successfully?” “Will they evaluate highly the work I have done?” However, all my worries brilliantly collapsed.

From thinking “How useful can I be there?” I happened to experience just the opposite: “They accept me.” My companions never made distinctions regarding persons in front of them according to academic degrees or wealth, social position or nationality. As human persons, they always met openly with others.

At the beginning, Jean Vanier (1928-2019), founder of L’Arche, most probably thought he wanted to help the disabled. Moreover, He realizes that, surely, those caring for mentally disabled people have the gift of using words modern society has lost, like “celebration,” “forgiveness,” or “creating personal relationships.” A L’Arche Community uses such words abundantly. I think the feeling I experienced that “You are welcome” has its origin there.

In the fall of 2007, I became a full member of Cana Home. My job was to be responsible for making jelly. Somehow I forgot to put in the gelatin and all you could see in the refrigerator was just 40 containers of orange juice. The usual thing that would happen in such a situation would be the reprimand “You cannot make even jelly!” or everyone would simply be disappointed. My face became deadly pale. But when I went to the dining room, my companions said “Delicious! Yokoi’s cooking tastes really good!” I was greatly surprised.

A little later, I found that a female assistant had bad feelings against me. I have a strong voice and big manners, so I seemed like a disagreeable person to people around me. I was transferred to a different house from the group I belonged to. I took my meal with the other members in silence. From the time I arrived at the new house, my heart was filled with shame and deep emotion, even with anger. “Why does nobody here realize that she is worse than me?” I even thought: “I’ll tell the director that I’ll quit the Cana Home tomorrow.” Then, after the meal, while we were washing dishes, companion N started to say, “It’s become lively, very lively since Mr. Yokoi arrived. I’m happy that Mr. Yokoi has come to us.”

I had believed that from then on nobody would approach me to talk to me but that everybody would dislike me. I came to this house expelled from the other one because I had bullied an older assistant. Everybody could easily know that. The compassion which companion N showed me opened up a landscape in life that I had never yet seen.

Going back in time, I spent a month in Kerala (India) while I was a Jesuit novice. There I met Emmanuel, a novice one year ahead of me. He had formerly been a professional dancer. When we went together to Church to assist with the Sunday school, he used to tell me “Come on, Yokoi. Let’s dance.”

My grades in physical education were always 1. When it came to dancing in public, I only experienced being laughed at by all, because my performance was awful. I reacted quickly, saying “Dancing is impossible for me. I’m too shy.” 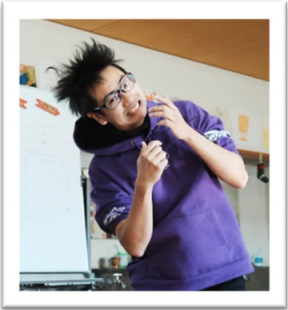 Then Emmanuel, with a serious look, shouted, “What are you saying? Express yourself. Yes, do it!”

I thought, “All right, if you say so, let me be laughed at by all.” I did the “octopus dance.”

After I finished, Emmanuel, looking a little less serious than before, praised me. “Yokoi, you could do it. You were able to express yourself!” 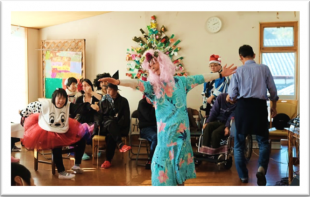 I recall many episodes and incidents during my stay in the Cana Home. Isn’t it that what really matters in life is not whether one is successful, recognized or praised by others, etc., but “to be able to express oneself”?

The life of the companions is an expression of themselves as they are. But, as for myself, I still feel that there is an obstacle or a wall preventing me from expressing myself as I am. Besides, I am intolerant with others when they express themselves and have a tendency to regard and judge them badly. With regard to accepting others as they are, I am far behind the attitude of the other companions. 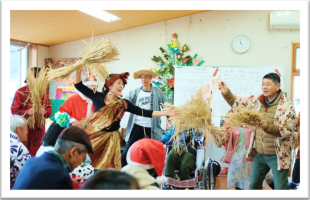 If there is something in this article on my remembrances that has touched you, please come to the Cana Home and meet the companions. Most probably you will experience what happened to me: “new horizons” opening wide before you.