Unless “Kyu-rai” is overcome, a society that respects human rights cannot be realized

Since May 2001, when Japan’s “Leprosy Prevention Law” was condemned as unconstitutional, the perspective framework concerning Hansen’s disease has shifted greatly within the legal domain. However, other fields still appear not to have caught up with the legal field today. On June 28, 2019, a court ruled in favor of claimants in the case of “Hansen’s Disease Families.” The families and their advocates subsequently sealed the verdict by preventing appeal, and were able to extract a direct apology from the Prime Minister. An important factor that led to these results was the loud voice of the claimants in the families’ case, but I believe the winning verdict of Kumamoto District Court in 2001 also exerted strong influence.

The 2001 Kumamoto District Court verdict, which caused shifts in the framework of understanding
In our country, “kyu-rai”* activities were implemented legally under the “Leprosy Prevention Law,” according to which people deemed to have leprosy were isolated and expunged in order to protect the state. This policy was one that, under the guise of charity, prompted even well-meaning citizens to exclude from society those who were labeled as Hansen’s disease patients. Underlying this encouragement of people toward “kyu-rai” activities was the common understanding that “There is widespread prejudice and discrimination in our society against Hansen’s disease.” This leads us to worry that they might be persecuted in such a society. Furthermore, this leads to the unilateral judgement that, rather than face such dangers, people would be happier to enter a sanatorium and live with companions who have the same disease. These well-intentioned assumptions became the accepted norm of society.

The Kumamoto District Court verdict of May 11, 2001 found that, within such a society, it was none other than the national policy under the “Leprosy Prevention Law” that was unconstitutional. This was a groundbreaking event, comparable to the shift “from earth-centered theory to sun-centered theory,” or “from emperor (real) sovereignty to popular sovereignty.” In other words, a major shift had occurred in the framework for viewing Hansen’s disease problem*.

What is at issue is not the character or identity of an individual, but the stand point of political power
There are some religious persons who speak of “save the lepers” activities with pride and as a reason for indemnification, saying “It was religious people who frequently visited sanatoria for Hansen’s disease, while everyone avoided them.” However, if we sincerely accept and understand that a shift occurred in the perspective framework as a result of the Kumamoto District Court verdict, then “comfort visit proselytization” and other “kyu-rai” activities are objects for reflection. This is not a criticism against the individual identity or character of those who interacted with Hansen’s disease patients, but because the stand point of political power has been questioned.

This shift also relates to the change in awareness toward disabilities with the “Act for Eliminating Discrimination against Persons with Disabilities” of 2016. This is to say, it was a shift from the “medical model,” which considered disability to be with the individual, to the “societal model,” which considered disability to reside in society. The Act does not state that consideration given to persons with disabilities is insufficient, so we should interact with disabled persons with greater kindness. It calls upon us to recognize that ours is a “society of unequal considerations” that is full of considerations given to “able-bodied persons,” and to make these considerations equal. The same thing as this occurred through the claimants’ winning verdict in 2001. The claimants didn’t appeal in the trial, “We are experiencing hardships, so please help us.” They initiated the trial to press the courts to acknowledge that the “Leprosy Prevention Law” violated the constitution, which advocates respect for basic human rights. Therefore, the behavior of citizens as cheerleaders and supporters, offered until then from the standpoint of “help for the lepers,” would not be solidarity, but the continuation of victimization.

Our society is comprised of many kinds of relationship. When we consciously look back at the contents of those relationships, it is clear that the political power stand point as citizens was that of victims, set up by the “Leprosy Prevention Law” to be victimizers. By resigning from this position, equity is achieved, and true solidarity becomes possible. The Hansen’s disease problem exposes a reality of our society, that citizens living in asymmetric relationship are set up to be victimizers.

“Kyu-rai” activities that boil down to eugenic ideology
When the Constitution of the Empire of Japan (a.k.a. Meiji Constitution, 1890-1947) changed to the current Constitution of Japan (1947-), the Imperial Rescript on Education was abolished, because it violated the new Constitution’s principles of popular sovereignty, respect for basic human rights and pacifism. But there are still people today who laud it, saying its content was wonderful. Their reasoning is that the Rescript set out a variety of virtues, such as filial piety, and was useful for building human personality. Similarly, there are people who, even now, after national policies under the “Leprosy Prevention Law” were condemned, see no problem with “kyu-rai” activities, or those who agree with its reasoning. But we must decisively break away from the “kyu-rai” activities and mentality. This is because “kyu-rai” activities were not an endeavor to respect the human rights of Hansen’s disease patients, pursued in opposition to the national policies under the “Leprosy Prevention Law,” but were promoted as an integral part of the national isolation policy. To celebrate Father IWASHITA Soichi and others who served people with Hansen’s disease without any reflection upon (the misguidedness of) “kyu-rai” activities is, I suggest, the same as using the Imperial Rescript on Education in the present age.

In the pre-war period, the Imperial Rescript on Education was used for Japanization*, and served the function to heighten momentum toward war. In the same way, “kyu-rai” activities offered the appearance of relief for Hansen’s disease patients, but foiled the rising up of persons concerned and functioned to complement the implementation of forced isolation policy, and to conceal the realities of the isolation policy. In essence, they were activities that removed troublesome people, so that they would not cause trouble for the state. This ultimately boils down to eugenic ideology, which says that it is better to have no needy people, or people with disease or disabilities.

To resign from positions of victimization becomes the first step toward the removal of social structures of discrimination
In the recent verdict* in the families’ case, the court found that discrimination against Hansen’s disease is created by the state, and that it is present in society itself, more so than in the hearts of individuals. It is a problem of social structure. Even if a person is of fine character and referred to as a “saint,” s/he becomes a victimizer because there is no choice but to live within this discriminatory structure. They are set up to be victimizers by the policies of the state. This is why the first step toward elimination of the discriminatory structure is to see through the structures of discrimination and recognize that one is in a political and power position of victimizer. Our challenge is to be mindful of this as we engage with people who lived with Hansen’s disease, and to leave behind our position as victimizers. This entails renunciation of special privilege, and escape from thoroughly asymmetric reality. In other words, we must engage with people who have lived with Hansen’s disease not as objects of relief, but as subjects of liberation and as collaborators. In order to do this, it is imperative that we distance ourselves from the asymmetric power relationship of “priest and believer.” This relates also with the 2nd Vatican Council’s* expression for the church, “people of God.”* This is because, in the Bible, “people of God” asserts the fundamental equality of all people who have entered into covenant with God. Surely, through this, it becomes possible to engage in the effort to eliminate social structures of discrimination.

After the 2001 verdict, the government’s approach in awareness-raising activities has been to ignore the problem of positionality, while admonishing us to become “good people,” or “kind-hearted people” through ingenuity of the heart and morals (content of exhibits at the National Hansen’s Disease Museum, etc.). This manner of engagement will not bring about an end to the human rights violations and discriminatory structures that are caused by policies of the state. This is evident from the fact that those who performed sterilizations, abortions and infanticides at Hansen’s disease sanatoria were not wicked, inhuman individuals, but doctors and nurses who were kind-hearted and devoted. Once again, our society and manner of awareness-raising are under question.

Toward a society that shares, not denies, its mistakes
However, it is difficult for a human being to admit that s/he is a victimizer. Rather, in reality, our self-protective functions are activated to deny that we are victimizers, or act in ways to avoid seeing it. This also penetrates into attitudes associated with historical awareness, like resistance to acknowledge Japanese responsibility for the Asia-Pacific war, or for its colonial policies. The challenge that is posed to us by the Hansen’s disease problem is this: We must acknowledge that we are victimizers, and we must move to build a society that shares, not denies, our mistakes. I wonder if the Catholic Church, because it has advocated the avoidance of mistakes, hasn’t become an institution that has a tendency to condemn and deny mistakes, or to deny responsibility and act as if no mistake was made. Mr. UCHIDA Hirofumi, who was vice-chair of the Verification Committee Concerning the Hansen’s Disease Problem* says, “Unless victimizers continue to learn from the victimized, they will not realize that they are victimizers.” It is essential that, by learning from those who suffered Hansen’s disease and their families, we acknowledge and share, rather than deny, the mistakes of the Catholic Church, and that we awaken to our own harmfulness.

*Kyu-rai (救らい: literally “Salvation/Help for lepers): While appearing to help those with Hansen’s disease, the actual purpose was to protect the state from Hansen’s disease. Kyu-rai activities entrenched people into the position of either help-receiver or the help-giver, and caused all to fall into a violent, ruler-ruled relationship.

*Hansen’s disease problem: Reference to the fact that our society has still not recovered from the harms that were created by the state and inflicted upon Hansen’s disease sufferers and their families. Defined in the “Basic Law on the Hansen’s Disease Problem (popular name), 2008.”

*Japanization: The Japanese term, 皇民化教育 (kōmin-ka kyōiku), literally means “education to transform into people of the Emperor.” Japanization not only meant “to make or become Japanese in form, idiom, style, or character,” but to instill reverence and absolute obedience toward the Emperor.

*2nd Vatican Council: A conference held from 1962-’65, at which the Catholic Church decided to make a change of direction.

*People of God: An expression addressing the question, “Who is the church?” based on a return to the Bible. It is an expression that proclaims the fundamental equality of all baptized people before God, without viewing the Church it in terms of hierarchy. 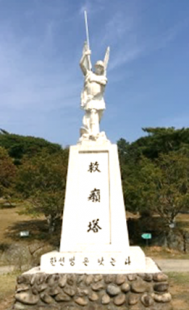 Statue of Archangel Michael stands atop the “Salvation for the Lepers Tower” at a Hansen’s disease sanatorium that was built during Japanese colonial rule on the Korean Island of So Rok Do.