Jesuits of East Asia and the Pacific Facing the Future

From October 14-16, 2019, a group of Jesuits and co-workers, invited by the JCAP central office, gathered in the Sacred Heart Retreat House in Quezon City (Philippines). They came from countries represented in JCAP.

Many changes have occurred in the East Asia and Pacific region, as well as all over the world, since JCAP embraced the 10 top priorities that had been delineated by a group of “specialists” several years ago. On the other hand, the Society of Jesus, under the leadership of the new Fr General, Fr Arturo Sosa SJ, has recently adopted Universal Apostolic Preferences (UAP) to guide the whole Society for the next 10 years. Everything considered, JCAP decided to review the past Apostolic Plan 2014-2019 under the light of the Preferences.

A) To show the way to God through the Spiritual Exercises and discernment,
B) To walk with the poor, the outcasts of the world, those whose dignity has been violated, in a mission of reconciliation and justice,
C) To accompany young people in the creation of a hope-filled future,
D) To collaborate in the care of our Common Home.

This time JCAP took, for the first time, a totally new approach to planning, by summoning the heads of all active Jesuit apostolic sections under JCAP in the Region, together with their consultants or core members. Thus, a large number of 55 Jesuits and co-workers gathered in the Philippines to begin the process. Ways to proceed were also new and it was made clear from the start that future decisions were the role of the Major Superiors, who constitute the executive branch of JCAP.

Here I will just give a brief report on the extended consultation. For those interested in a detailed report, please note that our Jesuit Social Center has a 14-page official report sent from the JCAP office.

How the Extended Consultation was handled
Inputs were minimal and there was a great deal of spiritual conversation and time for prayer and reflection. The planning that emerged will be given to the Major Superiors during their July assembly next year. It became clear that everyone has to move slowly so as to assimilate the UAP and to move as one body. We want to pursue the will of God, encountering Jesus there. Most probably, time will be needed for deep discernment.

In order to cover all the Jesuit apostolic sections represented in JCAP, the approach taken in the whole process of the discussions was to decide on a common ground fitting all various activities.

The Consultation started by reflecting on Jesus’ miracle of the multiplication of loaves and fishes (Mark 6:30-44). This passage became the spiritual focus of the Consultation. In our apostolic mission we do have something to contribute, however small it may be, like the disciples looking around to find some bread and fish. What they found was not enough, but the final results, the miracle itself, came from Jesus’ power.

The core of the Consultation was to reflect on the real situations we are living in from the viewpoint of the UAP mentioned above.

In the light of our Jesuit spirituality, the assembly searched for specific areas of importance in our Region and decided what to stress and what to propose to Major Superiors, who are the decision makers. The 3-day Consultation were mainly small-group discussions, where we listened to one another, gave reports to the general assembly, and analyzed them back again in groups, with sessions for private prayer, spiritual conversation, and discernment. The Consultation was conducted with great professional leadership.

Sometime at the beginning of the coming Year 2020, JCAP Major Superiors will make Spiritual Exercises together, based on the premises of the Extended Consultation. Later, in July of the same year, they will hopefully take decisions for the approval of future JCAP plans. 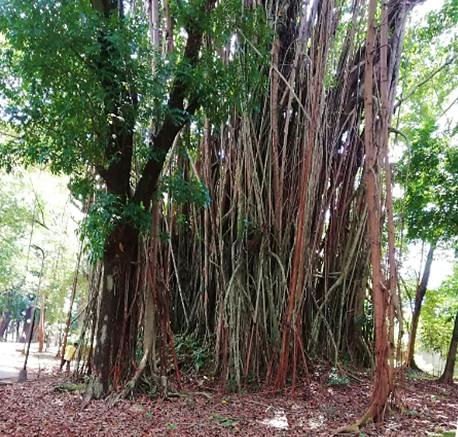 ☜ Tree at the site of the consultation, an image of JCAP. From the roots of Ignatian spirituality many sprouts, various sectors, are born to constitute the one JCAP “arbor.”