Participating in the Symposium “Thinking of the Process for Reconciliation and Peace in East Asia” in Seoul, Korea

I participated to the Seoul Symposium with Fr. Nakai Jun and thirteen other members from Japan from September 26 to 27, 2019. In the midst of the deteriorating relations between Korea and Japan, merciful God has given us this opportunity to hope, pray, and act together for healing the relationship. With gratitude I would like to share an overview of this symposium and the prospects I received there.

Summary of the Symposium
This gathering began last year in Nagoya, Japan as “The Reconciliation and Peace Network of East Asia.” This year it was a Korea’s turn to host the symposium in Seoul. There were more than fifty Korean participants: bishop, priests, sisters, researchers, and lay activists. The venue at the opening was filled with participants’ enormous joy of reunion. As a newcomer in the network, I felt the friendship between Korean and Japanese network members had nurtured since Nagoya.

Speakers of both sides passionately presented their desire, efforts and activities for peace between the two countries and in East Asia. The text of speeches and presentations were printed in both Korean and Japanese in the booklet and simultaneous translation was available throughout the symposium. This meticulous arrangement by the Korean host greatly helped me to understand the substance of each presentation in detail. 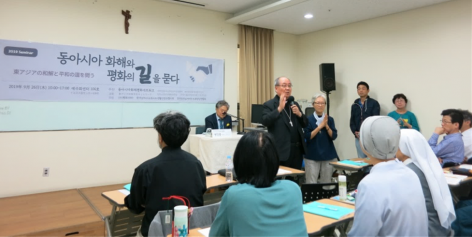 The intensive program was opened by the keynote speech of Bp. Peter Lee Ki-heon of Uijeongbu Diocese on “The Mission of Reconciliation for Christians,” followed by lecture “The Reconciliation in East Asia and Peace: An Apostolic Duty of Korean and Japanese Christians for Peace” led by Research Chairman Byun Jin-heung of the Catholic Institute of Northeast Asia Peace (CINAP). In the afternoon, three presentations were given, followed by a brief Q&A session. From Japan, Sr. Furuyashiki Kazuyo of the Helpers Sisters / the Center for Promoting “Apostles of Peace” in Hiroshima Diocese, reported “the Catholic stance on the issue of Korean-Japanese history, from the viewpoint of the Japan Bishops’ Conference,” and Mr. Yanagawa Tomoki of the Jesuit Social Center in Tokyo presented “Attending the Jesuit Peace Youth Project: Korean-Japanese views of history and peace-efforts by young generations of Catholics.” From Korea, Ms. Park Yu-Mih reported “Korean-Japanese Catholics working together for peace and denuclearization.”

After the presentations, we separated into small groups to exchange ideas and actions for peace building as “Peace Apostles.” At the closing, “the Peace Declaration of Christians in Korea and Japan” was adopted to wrap up the Symposium. The declaration was to inspire us to become an instrument of God for Peace in Christ solely relying on the power of God, and to expand solidarity among Catholics in the two countries and also with other religious people and global citizens. I perceived the declaration was highlighting the spirituality, that originated from creation from nothing (creation ex nihilo) as a “Peace Apostle,” which was distinctive from secular peace solutions.

While listening to Mr. Byun Jin-heung’s speech and participants’ responses against his remarks on the issue of Japan’s apology to Korean war-victims, I somehow recalled the era of kings in Judah in the Old Testament. Righteous and unrighteous kings took a turn to reign the Kingdom of Judah, and the life and faith of people were greatly affected by them. However there were always prophets who passed the torch of faith to next generations. We have also received the torch in these turbulent times.

Current Japanese government is creating an anti-Korea narrative and denying Japan’s historical invasion of Korea in order not to make an apology. As some participants expressed that “an apology must be made first” and “victims will feel left out if there is no apology” in response to Mr. Byun Jin-heung’ speech, I think it is our task to take actions for sincere apology and compensation from our government. At the same time, the symposium made me also realize that: no matter how governments may react, no matter how diverse values and opinions may be, it is clear to us that the Churches of Korea and Japan are united in one basic desire and are living as servants of God.

Peace and Ecology Tour to the Korean DMZ 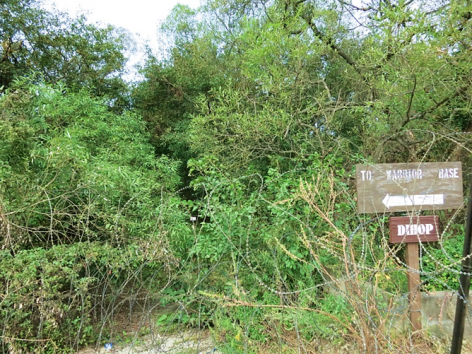 The next day was a peace pilgrimage to the Demilitarized Zone (DMZ). Mr. Kim Seung-ho, the director of the DMZ Ecology Research Institute, guided us to a nature walk in the Civilian Control Zone (CCZ) set along the DMZ. Prior booking was required to enter the CCZ and we could only go to designated areas after ID check at a security checkpoint. Mr. Kim Seung-ho described it ironically that, because of the DMZ untouched nature and rich ecology were preserved there migrant birds came back every season. On the one hand, nature has been preserved, on the other hand, life of local people are severely restricted. They are allowed to stay in their own land only for designated hours. When we stood at a small bridge observing the natural forest and listening to Mr. Kim’s explanation, a farmer lady passed by on a speeding mini-truck shouting “Make way! We’re in a hurry!” These people might have decided to remain on this land despite such restrictions perhaps because their relatives live on the other side of the DMZ. What a nostalgia they have across the border! What a deep desire they have for a day of free movement! How tough their daily life is! There are sad divisions among relatives and neighbors caused by the war. At the same time there is precious nature protected from human activities of development. This made me ponder about human nature and activities. 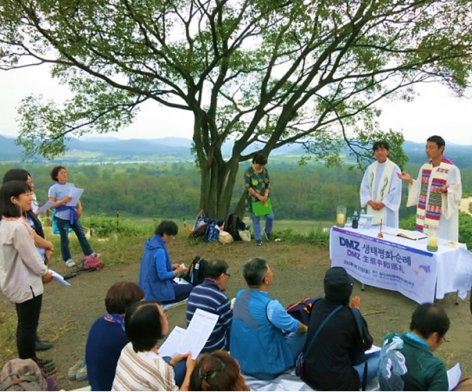 “He shall judge between nations,
and shall decide disputes for many people.
They shall beat their swords into plowshares
and their spears into pruning hooks.
Nation shall not lift sword against nation,
nor shall they train for war anymore.”
(Isaiah 2:4)

This was the word of God read in the Mass held on the hill overlooking the Imjin River during the tour. In this word I found the light in the darkness and God’s eyes on this land and on our world. God surely has a plan for peace and only God can dismiss wars from human nature. On that day on the hill, Korean and Japanese sisters and brothers gathered as coworkers for peace and prayed in the name of God. I felt enormous blessings in there. Along the way back, a young Korean participant and I talked how we could invite more people into our circle, particularly young people. We already started to think for a next step.

Sharing on the Final Day
Before the departure to Japan, we, participants from Japan, had a short time to review experiences of the 2 days and to share thoughts. One Korean Japanese participant bravely and honestly shared her upset during the symposium. Some notions in there had touched her wounds; not much of her personal but collective wounds as Korean Japanese, I think. She pointed out that the use of the word “reconciliation” sometimes became violent to some people, by referring to an essay titled “Committing violence in the name of reconciliation” by Suh Kyung-sik (2010). Demanding reconciliation without apology is to coerce a forgiveness to victims, by putting burdens only onto them to compromise and by discarding their agony. It is an act of violence, she said. Her comment made me realize that I used to use the word “reconciliation” and “peace building” so easily in my previous work of Official Development Assistance, without really listening to the unheard voices of victims.

Her sharing also reminded me that Japanese apology to Korean Japanese was crucial. Their sufferings still continued from generation to generation left in-between the two countries. Perhaps we tend to overlook their presence and their sufferings even in peace talks of Korea-Japan relationship, unconsciously filtered by a paradigm of nation / country. Severe experiences of Korean Japanese and the sad history of Korea-Japan relationship are overwhelming to me. I am afraid that my insensitive and ignorant behavior or words may further hurt them who have already suffered enough. However I also realized through her sharing that speaking-up of honest feelings and thoughts, even painful ones, would start crucial dialogue to understand each other. It seems that the forces of evil are gaining power and enforcing a split between people and countries, and we are becoming apathetic toward dialogue and prefer to let sleeping dogs lie. We must continue to have dialogue even though it is sometimes agonizing.

Finally I would like to express my gratitude to the Korean host for such a fruitful program, to Fr. Nakai Jun for leading the tour from Japan and to everyone for this encountering.