Welcoming with Joy the Birth of Jesus

Fifty Years of the Jesuit Social Justice and Ecology Secretariat

Every year when the season of Advent comes around, it calls to mind the birth of Jesus in these words of the Spiritual Exercises.

The First Point. I will see the various persons, some here, some there. First, those on the face of the earth, so diverse in dress and behavior: some white and other black, some in peace and others at war, some weeping and other laughing, some healthy and other sick, some being born and other dying, and so forth. I will see and consider the three Divine Persons, seated, so to speak, on the royal canopied throne of their Divine Majesty. They are gazing on the whole face and circuit of the earth; and they see all the peoples in such great blindness, and how they are dying and going down to hell. I will see Our Lady, and the angel greeting her. Then I will reflect on this to draw some profit from what I see.

The Second Point. I will listen to what the persons on the face of the earth are saying; that is, how they speak with one another, swear and blaspheme, and so on. Likewise, I will hear what the Divine Persons are saying, that is, “Let us work the redemption of the human race,” and so forth. Then I will listen to what the angel and Our Lady are saying. Afterward I will reflect on this, to draw profit from their words.

The Third Point. Here I will consider what the people on the face of the earth are doing: How they wound, kill, go to hell, and so on. Similarly, what the Divine Persons are doing, that is, bringing about the most holy Incarnation, and other such activities. Likewise, what the angel and Our Lady are doing, with the angel carrying out his office of ambassador and Our Lady humbling herself and giving thanks to the Divine Majesty.〔S.E. 106-108〕 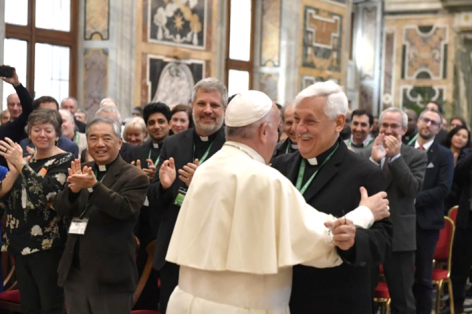 These words came to mind at the beginning of November this year. From November 4 to 8, a congress was held in Rome to commemorate the 50th anniversary of the foundation of the Jesuit Social Justice and Ecology Secretariat. At the beginning of this gathering, the consideration of this part of the Spiritual Exercises was recalled. This is the basis of Jesuit spirituality and has been the source of the vitality of the Jesuit social apostolate during the last 50 years. Moreover, this part will continue to remain the source that feeds our prayer and action.

Looking back on the road traveled during the past 50 years, we reflected on what people see, what they listen to, what are they attracted by, what they value in life, what they smell, what they are thinking about, what they are doing. How does God himself regard the way people think and their human feelings? What are the Divine Persons doing? God’s sensibility and thinking, his works urge us on. All these become the point of departure of our apostolate.

The Father has sent the Son into the world. Such is the meaning of the birth of the Lord. Born in this world, Jesus spent his life building up the Kingdom of God. Jesus was crucified and rose on the third day. He sent his Church into the world and founded a religious order that shoulders his name, sending its members with many companions into the world. The sending of the Son, of the Church, and of ourselves manifests God’s intentions, his sensibility and thinking to guard and guide our earth, as well as each person on the face of the earth. While giving importance to every individual, he lived as a poor companion of the socially excluded and the oppressed. He lived with the poor and the suffering and, as a result, experienced discrimination, suffering, and oppression. His preference for the socially excluded manifests the justice of God’s affection.

Has our response truly been loyal to his sending? Back in 1973, Fr General Pedro Arrupe answered in Valencia, “We have not been loyal.” What can we say now?

In the congress commemorating the 50th anniversary of our Secretariat, we recalled the Jesuit martyrs who died for the cause of justice during these 50 years. Heading the list in the booklet of Jesuit martyrs entitled Torches of Light and Hope were the names of 36-year-old Fr Alfredo Perez Lobato, gunned down on December 1, 1973 in El Guera, where he was serving refugees and the poor sick of Chad; also the martyrs of El Salvador murdered by the military on 16 November 1989; and 57 more. Mentioned by name there is the 26-year-old Jesuit scholastic Richard M. Fernando, who, in order to protect Cambodian students from a grenade thrown at them, became the grenade’s victim on 17 October 1996. In East Timor, 70-year-old Fr Karl Albrecht, a Jesuit close to me, and 34-year-old Fr Tarcisius Dewanto were murdered on September 1999. Aside from the 57 Jesuits who were murdered, many lay collaborators also offered their lives. We should also hold in our hearts the innumerable number of martyrs still alive among us.

Fr General Sosa addressed the congress under the heading “To follow Jesus accompanying the people on the road toward a reconciled world.” He gave thanks to God, bringing to attention the fresh winds unleashed by Vatican II, the contributions of Fr Pedro Arrupe, and the 4th Decree of GC32: “Our mission Today, the Promotion of Justice and the Service of Faith,” and, quoting the Constitutions of the Society approved in 1550: This Society “was founded chiefly for this purpose: to strive especially for the defense and propagation of the faith and for the progress of souls in Christian life and doctrine.” Fulfilling this objective today as followers and companions of Jesus of Nazareth is only possible if we become incarnate like him in a humanity crucified by the sin of the world and contribute together to overcoming the causes of the oppression of human beings and abuse of the environment.

Fr General went on to offer 10 points on which to examine future Jesuit commitment to Social Justice and Ecology.

At the congress, expressions like “companionship,” “way,” “synodality” were heard on the floor. “Let’s walk together” was a main issue this time. Who is the one calling us together? Fr General? Rather than other Jesuits, is it not God himself who is inviting us to walk together in the way of Jesus? We look back at the original scene of the infant Jesus and those persons surrounding him.

To the call of the angel, “Don’t be afraid Mary; God has been gracious to you; you will become pregnant and give birth to a son, and you will name him Jesus,” Mary answered, “I am the Lord’s servant; may it happen to me as you have said.” And Mary started to walk together with Jesus (Luke 1:30-38). At the call of the angel of the Lord, “Joseph, do not be afraid to take Mary to be your wife,” Joseph married Mary as the angel had told him (Matthew 1:20-24). Again, the angel of the Lord appeared to the shepherds and said to them, “Don’t be afraid. I am here with good news for you, which will bring great joy to all the people. This very day in David’s town your Saviour was born – Christ the Lord!” The shepherds answered, “Let’s go to Bethlehem and see this thing that has happened, which the Lord has told us.” (Luke 2:10-15) “Some men who studied the stars came from the East to Jerusalem and … went into the house where the child Jesus was. There they presented their gifts to him (Matthew 2:1-11). Just as the shepherds were invited to meet with the infant Jesus, these men from the East were also invited to walk together with Jesus, Mary, and Joseph. We too have been invited to meet with Jesus in the company of all kinds of people and to walk together along the road of our human life.

Although the infant Jesus, Mary, and Joseph are believed to have been blessed with many gifts, nevertheless, they were excluded from the inn. In other words, the people of Bethlehem refused them (Luke 2). Again, they had to escape as refugees to Egypt when, on the occasion of Jesus’ birth, boys under 2 years of age living in the Bethlehem region were all killed (Mathew 2). The same harsh fate is also awaiting those invited to follow in the footsteps of Jesus.

When we feel somehow frightened by something, the same person who told Mary and Joseph “Don’t be afraid” is inviting us also today to grow together with Jesus and follow him.