Imperial Succession and the “Separation of Religion and State” 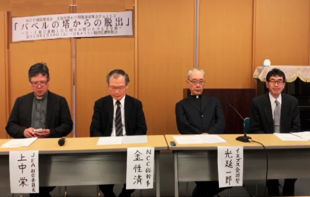 The following are comments from the Japan Catholic Council for Justice and Peace on the unconstitutional ceremony of imperial succession.

1) In relation to this year’s imperial succession, the Catholic Bishops’ Conference of Japan issued a message on Feb. 22, 2018, addressed to the Prime Minister of Japan, titled “A Request to the Japanese Government Regarding the Separation of Politics and Religion in the Imperial Abdication and Enthronement.” This message reads as follows:

The present Emperor will abdicate on April 30, 2019, and the new Emperor will be enthroned the next day, May 1.
At the previous enthronement after the demise of Emperor Showa, the Daijosai, which is a private religious event of the Imperial family, was held as “an event of the Imperial family with a public nature” despite its religious aspect. Public funds were spent on the ritual and the heads of the three branches of the government attended. Religious traditions were also brought into the accession ceremony which is a state affair. We strongly believe that these actions violate the principle of separation of politics and religion in the Japanese Constitution.
According to news reports yesterday (Feb. 21, 2018), the Daijosai this time will once again follow the procedure of the previous time. We wish to express our deep regret at this.
The principle of the separation of politics and religion in the Japanese Constitution (Article 20) was made out of remorse that Japan had fought a war under state Shinto centered on the emperor, violating the human rights and the peace of many people in the world, including Asian people. The Japanese government has a responsibility not to forget this anguished history by not following that path again.
For that reason, we call upon the Japanese government as follows:
“In the series of ceremonies and events for the abdication and enthronement of the Emperor, we call upon the Japanese government to strictly abide by the principle of the separation of politics and religion in accord with the Japanese Constitution, and to distinguish clearly between those acts that are matters of state and those ceremonies which are private religious observances of the Imperial family.”

2) Looking back to the time of the imperial succession from Showa to Heisei, the Catholic Bishops’ Conference of Japan issued 4 messages, addressed to the Catholic laity, to priests and religious orders of the Catholic Church and to the Prime Minister, mainly appealing for strict observance of the separation of state and religion, and freedom of religion.

In the message to laity, it was recalled that wars which were waged in the Emperor’s name during the reign of Emperor Showa caused the deaths of 20 million or more victims in the Asia-Pacific region, including Japan, and that the Emperor bore responsibility for this. Also, based on the words spoken by Pope John Paul II at Hiroshima during his visit to Japan in 1981—“To remember the past is to commit oneself to the future”—Church members were called upon to “renew our resolve to contribute to world peace, while maintaining a heart of atonement for the wrongs of the Showa era.”

Furthermore, it was stated that, “Amid the political and social activities surrounding the various funerary and ascension rites (of the Emperor), let us take care to avoid the deification of human beings, or absolutization of human-made systems, or universalization of a particular ethnic nationalism, and let us reaffirm our faith that, ultimately, the unity and fellowship of all humanity is achieved only in Christ.”

3) The message to priests and religious orders of the Catholic Church dug deeper, stressing the need to draw a clear distinction between the Shinto faith of ancient Japan and “State Shinto,” which was linked in particular ways with the Emperor system from the Meiji era onward. The message stated clearly that, “In the time of state Shinto, not only Japanese but people of other Asian nations were forced to submit to the Emperor and his nation, but we cannot accept such elevation of a human being, or a system created by humans, to absolute status, regardless of its form.”

4) In these ways, remembering that the nation of Japan has in the past fused the state, religion and military power into one and violated the basic human rights and peace not only of Japanese people, but especially of the peoples of Asia, and regretting that the Catholic Church itself caved in to a totalitarianism that was based on deification of the Emperor and promotion of the emperor-nation view of history under State Shinto and cooperated in the militarization of Japan and its engagement in war, the Catholic Church desires that the government of Japan strictly observe the fundamental principles enshrined in the Constitution of Japan, namely “separation of State and religion, sovereignty of the people, and renunciation of war,” and that Japan contribute to world peace.

In connection with this year’s imperial succession, too, we strongly demand that the occasion not be used for political purposes, so that people will not be controlled by a nationalism and ethnocentrism that imagines oneself to be a chosen people, nor by intolerant powers that produce discrimination and hate, nor by militarism, and so that human dignity and rights, freedom and diversity will not be threatened.