The Amazon Rainforest and Our Lifestyle 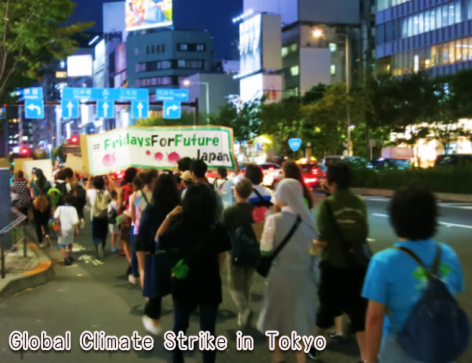 16-year-old Greta Thunberg started on her own the “School strike for climate”, which spread throughout the world, and on September 20, the Global Climate Strike march was held. Pope Francis has also been sending words of encouragement to Thunberg.

The special report, Climate Change and Land published by the IPCC (Intergovernmental Panel on Climate Change) in August 2019, shows the latest research results about the conditions of Earth’s land and the relations with climate change. According to this report, CO2 emissions from agriculture, forestry and other land use activities account for nearly one- quarter of all human greenhouse gas emissions in the world.

To prevent global warming in the midst of climate change, it is, of course, important to reduce greenhouse gas emissions such as carbon dioxide, but at the same time, it is crucial to preserve forests and oceans in a healthy state as they act as carbon sinks. The world’s forests amount to 31% of the land area and, working as carbon sinks, they absorb two billion tons of carbon dioxide each year. Furthermore, forests serve as a residence for many organisms and provide resources such as oxygen, water, food and medicine, which are essential to maintain life for us humans as well.

A Treasure House of Biodiversity and Cultural Diversity
Among all types of forests, tropical rainforests are evergreen broad-leaved forests in lowlands with a hot and humid climate throughout the year. These types of forests are home to various species of animals and plants. Called the “treasure house of biodiversity”, tropical rainforests also support the health of ecosystems of the entire planet. Cutting down a number of trees in tropical rainforests so that the sun can shine on the ground will cause surrounding trees to spread their branches to create shade, working to lower the temperature of the ground.

Today, huge tropical rainforests that still remain on Earth are only located in the Congo Basin in Africa, Sumatra in Southeast Asia and South America’s Amazon. These three tropical rainforests account for about 40% of the forest area on Earth. In particular, the vast Amazon is home to 10% of all organisms living on land in the whole world. Known to be the “Earth’s lungs”, it has a huge role in maintaining the atmospheric circulation and the water cycle of the entire planet.

In addition, tropical rainforests are home to many indigenous people who do agroforestry (a type of land use) that is sustainable and do not rely on the capitalist economic system. If we put our focus on the indigenous people’s wealth based on their traditional culture in their traditional way of living side by side with nature, tropical rainforests are a treasure house of cultural diversity.

The Amazon Rainforest’s SOS and Mass Development
Tropical rainforests, by nature, provide us with a tremendous abundance of blessings. However, the land is in a gasping state due to unsustainable mass development that has been continuing from the 1970s, such as mining of mineral resources, development of oil field and dams, logging for business materials, cultivated farmland for largescale monoculture farming for business crops and crops for livestock food. It is apparent that this has “…distorted our mandate to… ‘till it and keep it’ (Gen 2:15)” (LS. 66).

“This sister now cries out to us because of the harm we have inflicted on her by our irresponsible use and abuse of the goods with which God has endowed her.” (LS. 2)

Formed in January 2019, Brazil’s new regime presses forward political measures that put weight on development. This is causing deforestation of the Amazon rainforest to proceed at a greater speed than ever. Within the Amazon are woodlands that have dry season and here, excess swidden and land that have been ignited to cover up illegal logging has spread, causing repeated forest fires. In particular, the total forest area that was destroyed due to illegal logging amounts to 6,400 sq km, which is 1.9 times greater than in the same period of the previous year. Forest fires that have occurred since January total over 39,000, and have been increasing at a rate 1.8 times faster than during the same period of the previous year (Tokyo Shimbun, September 19, 2019 issue, etc.).

When forest fires occur, large amounts of carbon dioxide (greenhouse gas) are released into the atmosphere. Not only does this make global warming worse, it also takes away the homes of indigenous people and many animals and plants. The eastern part of the Amazon region especially has the largest primeval forest of the indigenous people’s habitat. Even though cutting down trees is prohibited in this area, development and illegal logging continues. Among the indigenous people are isolated tribes who have not come into contact with modern civilization. These people are being chased out of their jungle.

Indigenous people live their lives based on the land, which is why they are able to protect the land’s ecosystem. Chasing these people out of the land not only destroys the ecosystem, but leads to the extinction of the diversity of the indigenous people’s wisdom and lifestyle. This also means a huge loss to the entire planet. (Reference LS. 145, 146)

Development in Amazon May Seem Far but Are Close to Our Lives
In the background of the development issue of the world’s tropical rainforests such as in Amazon, lies “the intimate relationship between the poor and the fragility of the planet” (LS. 16) which brings about future poverty and disparities. This is why it is important that people who have the flexibility to stop and look, should speak out against companies that push development and are backed by the government. It is essential to cooperate globally and multilaterally to overcome the dilemma of development and the environment on an economic level, provide legal support and technical cooperation, and provide human support.

This has, however, been an issue from the late 1970s as a danger to the global environment, but why has unsustainable development continued to proceed? If we seek the reason for this by considering various relations, we can begin to see that the development of the Amazon rainforest is directly linked to our lifestyle. Delicious beef adds color to our abundant diet, but to produce 1 kg of beef, 11 kg of crops are needed to feed cows. While 40,000 to 50,000 people die every day in the world due to starvation, 70% of farmland throughout the world is needed to secure food for livestock. It is ridiculous that most of this is made possible by cultivating tropical rainforests.

Resources that come from tropical rainforests are widely used in the products of developed countries, such as small consumer electronics, smartphones, precious metals, meat, processed foods and snacks. Consumption of these products sold on the market is increasing annually, as they become items we cannot live without.

The Conviction that “Less is More” 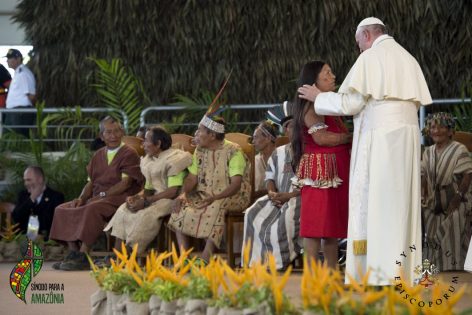 In January 2018, The Catholic Weekly of Japan published an item on the front page about Pope Francis’ visit to Peru.

According to the article, Pope Francis told some 2,500 indigenous people who gathered from the Amazon basin,that he had come to listen to their voices and stated, “Your lives cry out against a style of life that is oblivious to its own real cost.” Furthermore, the Pope pledged the church’s “whole-hearted option for the defense of life, the defense of the earth and the defense of cultures”. (The Catholic Weekly of Japan February 4, 2018, 4,420 issue)

As people living in developed countries, we may have been unaware of all this. However, while we must ask for forgiveness in our hearts that we have lived a rich life as consumers dependent on the sacrifices of indigenous peoples, we must be grateful and respect the indigenous peoples’ wisdom of comprehensive ecology, and we must earnestly build “a prophetic and contemplative lifestyle, one capable of deep enjoyment free of the obsession with consumption”. (LS. 222)

In addition, the Amazon is “like a sister with whom we share our life” (LS. 1) and while we can say that the Amazon is not our supply center of resources for our mass production, we unfortunately cannot deny the trend of finding justification to consume instead of stopping consumption in our real lifestyle. This is why we must remember our identity and the spiritual treasure of Christianity that “less is more” (LS. 222), as we call out to bring our hearts together for the protection of all life.