Time is Greater than Space: Walking with the Pope on the Road to Peace 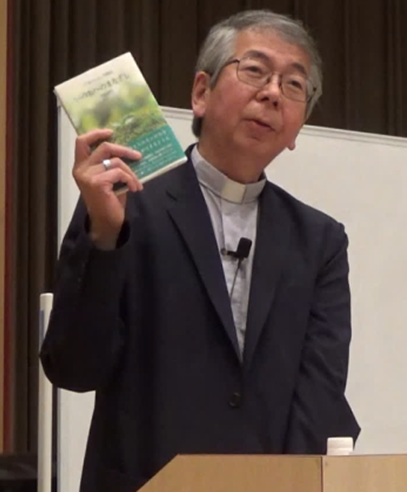 I. Apostolic Exhortation Evangelii Gaudium (English: The Joy of the Gospel), 2013
This is an important piece of writing that was published when Pope Francis became pope. Inside Chapter Four: The Social Dimension of Evangelization is the section, “III. The common good and peace in society”.

“Peace in society cannot be understood as pacification or the mere absence of violence resulting from the domination of one part of society over others. Nor does true peace act as a pretext for justifying a social structure which silences or appeases the poor, so that the more affluent can placidly support their lifestyle while others have to make do as they can.” (EG218)

“In the end, a peace which is not the result of integral development will be doomed; it will always spawn new conflicts and various forms of violence.” (EG219)

Here, peace does not mean simply a state without war, but emphasizes that peace is built in the midst of all people wanting development (happiness) in various areas. The importance of participating in politics as an important duty of citizens is also pointed out. “Let us not forget that ‘responsible citizenship is a virtue, and participation in political life is a moral obligation’.” (EG220)

II. About the Principle, “Time is Greater than Space”
“This principle enables us to work slowly but surely, without being obsessed with immediate results. It helps us patiently to endure difficult and adverse situations, or inevitable changes in our plans.”

“Giving priority to space means madly attempting to keep everything together in the present, trying to possess all the spaces of power and of self-assertion; it is to crystallize processes and presume to hold them back.”

“Giving priority to time means being concerned about initiating processes rather than possessing spaces.” (EG223)

Basically, we should not try to solve problems at once, but take the time to have many discussions and develop mutual understanding for peace. This is because when we look at problems spatially, we tend to rely on military force when we want to solve problems quickly.

In addition, this principle “time is greater than space” is also repeated in other writings by Pope Francis in different contexts. For example, it is mentioned in the encyclical, Laudato Si’ (English: Praise Be to You) no. 178 (2015), and in the post synodal Apostolic Exhortation Amoris Laetitia (English: The Joy of Love) no. 3 (2016).

Regarding peace, the principle “time is greater than space” expresses the need of sustained effort. The Catholic Bishops’ Conference of Japan’s message issued this message 70 years after WWII, “Blessed are the Peacemakers – Now especially, peace must not depend upon weapons” (2015), and is expressed in the following way easy to understand.

“We cannot solve all the world’s problems at once, but we can patiently continue to work toward peace and mutual understanding.”

III. January 1st The Pope’s Message for The World Day of Peace
Pope Francis, like all of the succeeding popes after Pope Paul VI, releases a message on the World Day of Peace on January 1st each year. There was a trend of picking up preferential topics such as modern slavery and issues concerning migrants and refugees. However, the 50th World Day of Peace in 2017 was titled, Nonviolence: A Style of Politics for Peace. The importance of nonviolence over violence to create peace is declared.

“If we also take into account the risk of an accidental detonation as a result of error of any kind, the threat of their use, as well as their very possession, is to be firmly condemned. For they exist in the service of a mentality of fear that affects not only the parties in conflict but the entire human race. International relations cannot be held captive to military force, mutual intimidation, and the parading of stockpiles of arms. Weapons of mass destruction, particularly nuclear weapons, create nothing but a false sense of security. They cannot constitute the basis for peaceful coexistence between members of the human family, which must rather be inspired by an ethics of solidarity. Essential in this regard is the witness given by the Hibakusha, the survivors of the bombing of Hiroshima and Nagasaki, together with other victims of nuclear arms testing. May their prophetic voice serve as a warning, above all for coming generations!”

“Recently, for example, in a historic vote at the United Nations, the majority of the members of the international community determined that nuclear weapons are not only immoral, but must also be considered an illegal means of warfare. This decision filled a significant juridical lacuna, inasmuch as chemical weapons, biological weapons, anti-human mines and cluster bombs are all expressly prohibited by international conventions. Even more important is the fact that it was mainly the result of a ‘humanitarian initiative’ sponsored by a significant alliance between civil society, states, international organizations, churches, academies and groups of experts.”

Again, based on the teachings of Pope John XXIII and Pope Paul VI, Pope Francis clearly states not just a ban of nuclear weapons but the need of integral disarmament.

Summary
What should be learn from these words of the Pope?

It is important to think that peace is harvested by respecting each other as brothers and sisters. However, we should not simply avoid war, but protect all people’s human rights and peace must be realized through the walk toward the happiness of all people.

We must firmly oppose the trend of emphasis put on nationalism. Every person, no matter what nationality, race and ethnic group they are, are all brothers and sisters. It is essential to overcome the feelings of discrimination toward people of another country and the indifference toward the suffering of refugees and migrants.

Whether to reduce or to expand armaments is a very important question. It is impossible to eliminate the Japan Self-Defense Force or to reduce self-defense costs to zero starting from tomorrow. However, consideration should be put on whether self-defense costs should continue to increase (this is Japan’s current situation) with emphasis put on threats from North Korea and China’s increasing presence in the oceans, or to decrease costs. The Constitution of Japan’s way of thinking is not based on having military forces protect Japan, but is based on having talks and negotiations to build peace. There is no doubt that this very constitution has been putting brakes on the increase of self-defense costs. Changing this Constitution will loosen the brakes and will lead to a never-ending expansion of armaments. It is vital now to determine whether we should reduce or expand armaments.

Lastly, it can be said that we should learn from the Pope’s teachings that as citizens, each one of us should participate in politics and know that we have the responsibility to work toward achieving peace.