Look! At the Cross! At the Savior of the World!

The basis of our Faith is Jesus’ Death on the Cross and his Resurrection. “Christ suffered under Pontius Pilate….”

This is the core of our Faith. Following the narration of the Gospels, we are invited to fix our eyes on the tree of the Cross and recall how much suffering Jesus had to undergo and how he was executed. Moreover, reflecting on Jesus’ relationship to us, we are invited to bring before our eyes the events of Jesus’ suffering and death. 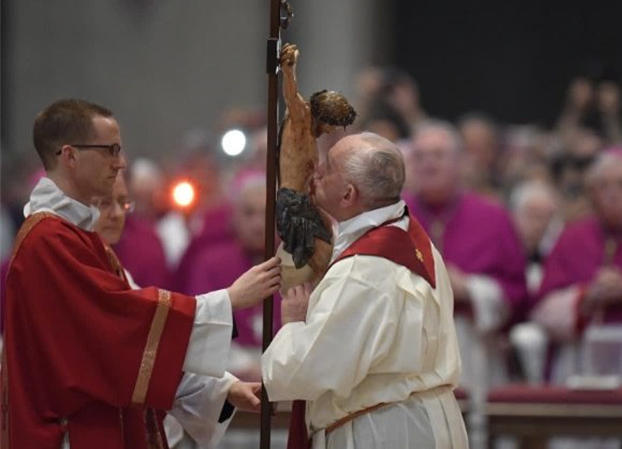 Pope Francis describes the Cross as follows in Evangelii Gaudium.

“An evangelizing community gets involved by word and deed in people’s daily lives; it bridges distances, it is willing to abase itself if necessary, and it embraces human life, touching the suffering flesh of Christ in others” (EG 24).

“Better yet, it means learning to find Jesus in the faces of others, in their voices, in their pleas, and learning to suffer in the embrace of the crucified Jesus whenever we are unjustly attacked or meet with ingratitude, never tiring of our decision to live in fraternity” (EG 91).

“To believe that Jesus shed his blood for us removes any doubt about the boundless love which ennobles each human being. Our redemption has a social dimension because ‘God, in Christ, redeems not only the individual person, but also the social relations existing between men.’ To believe that the Holy Spirit is at work in everyone means realizing that he seeks to penetrate every human situation and all social bonds: ‘The Holy Spirit can be said to possess an infinite creativity, proper to the divine mind, which knows how to loosen the knots of human affairs, even the most complex and inscrutable.’ Evangelization is meant to cooperate with this liberating work of the Spirit” (EG 178).

“Sometimes we are tempted to be that kind of Christian who keeps the Lord’s wounds at arm’s length. Yet Jesus wants us to touch human misery, to touch the suffering flesh of others” (EG 270).

Here, taking a broad social view of the Passion of Jesus as expressed in Evangelii Gaudium, I want to look at the Way of the Cross in view of the history of East Asia from the second half of the 19th century up to now.

“Then the detachment of troops and the captain and the officers of the Jews arrested Jesus and bound him” (John 18:12).

The “detachment of troops” consisted of a Roman imperial military unit of 300 to 600 soldiers, and the “officers” were most probably the garrison of the temple under the control of the high priest. The imperial authority and the Jewish religious authority use their full military power to arrest one person, Jesus. At that time, Judea was subject to the dominion of the Roman Empire, and especially to its overwhelming military power. After invading the country, the Romans annexed it and made it a colony. The suffering of Jesus was the suffering of all people under Roman colonial rule, in union with those suffering from its military regime, and in union with the pain of all those unlawfully arrested. Jesus also shares the anger of those who oppose the enforcement of building a military base against their will.

“You have heard the blasphemy! What do you think?” And they all condemned him to be deserving of death” (Mark 14:64)

Jesus is condemned to death for blasphemy. Jesus is placed within the social evil of a system that values as absolute its own religion and ideology. He suffers from the evils of authorities who do not allow any personal criticism of themselves. Jesus thus accompanies in their suffering those who have been deprived of their freedom of opinion and expression, their freedom of thought and conscience, and their religious freedom. The death penalty, whatever the method of execution, is cruel and inhuman. It damages human dignity, violates the indispensable human person, and must be rejected. Jesus, condemned to death and executed, shares his suffering with those who have been given death sentences and those who have been executed.

Jesus’ suffering is due to evil violence. He is in solidarity with those who are violently treated in all kinds of ways. He is in union with all those suffering from hate speech and violent language, rape and torture, domestic violence and abuse.

“They compelled a certain man, Simon of Cyrene, the father of Alexander and Rufus, as he was coming out of the country and passing by, to bear his cross” (Mark 15:21).

Roman soldiers forced Simon to bear Jesus’ cross. Simon is forced to participate in Jesus’ suffering. Colonization forces many people to obey authorities and submit to forced labor. Their suffering is closely connected with Jesus’ suffering. Jesus shares the suffering of those who have to work as slaves under the name of “trainees,” those who are treated as throwaway items of modern society.

“Then the soldiers, when they had crucified Jesus, took his garments and divided them into four parts, to each soldier a part, and also the tunic. Now the tunic was without seam, woven from the top in one piece” (John 19:23).

Jesus was stripped of everything he had. The suffering of those whose personal possessions have been expropriated and those who have been deprived of cultural means and have become fully burned out becomes the suffering of Jesus.

“Now it was the third hour, and they crucified him. And the inscription of his accusation was written above: KING OF THE JEWS” (Mark15:25-26).

Death by crucifixion was at that time a brutal punishment for non-Romans, especially for slaves. Jesus, nailed to the cross, shares his pain with that of prisoners under death sentences, with those who have been deprived of their freedom, and with women sexually abused and raped at military facilities.

“After this, Jesus, knowing that all things were now accomplished, that the Scripture might be fulfilled, said ‘I thirst’” (John 19:28).

August 6, 1945. People with scorched skin and tattered clothing could not be cared for by a doctor and gradually weakened. “Water! Water!” they cried. “Give me water!” Drinking water was passed around, but many had to go without water. This thirst has similar resonance with the thirst of Jesus. Many people living in this spiritual desert of the world wander around looking for a drop of healing water. Jesus shares their thirst.

In the midst of despair, Jesus joins those who breathe their last with regrets. Even now, the voice of Jesus resounds from the Cross, crying “I Thirst.” “Eloi, Eloi, lema sabachtani.” Such is the cry of countless suffering people. What is our response?