From Fr. Jorge to Papa Francisco 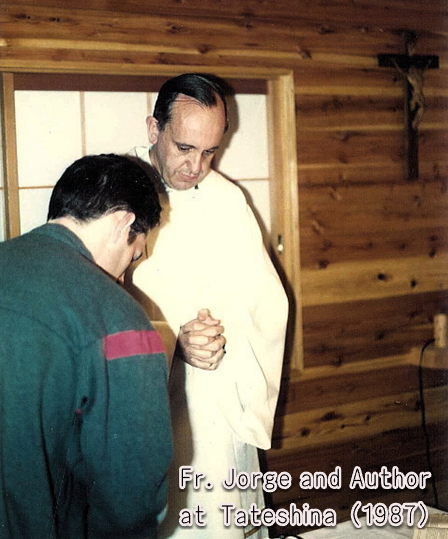 Recently, on the occasion of Papa Francisco’s coming visit to Japan, there has been a great demand for all kinds of information regarding his visit. Moreover, no matter how thorough the coverage of his visit might be, I believe that not all information will be helpful. And there must be a strong reason why the Pope chose to come to Japan, so we can expect his visit to be a fruitful one. Otherwise he could just as well deliver a message from Rome and there would be no reason for him to come all the way to Japan.

Aside from presenting to the world unique Japanese themes like abolishing nuclear weapons or focusing on hidden Christians, the Japanese Church should cooperate with the media in such a way that the message of the Pope will be correctly transmitted. It is also important for us to manifest the true image of the present Catholic Church. The problem of an aging Church could also be noted, since the Pope, being elderly himself, might offer some realistic guidance.

A film like Call Me Francis presented a usually unknown dimension of the Pope. A person with his experiences can talk about peace with persuasive power. His messages always reflect the vivid reality not only of countries at war but also of the deep suffering of families as well. In 1981, when I became a Jesuit, the confrontation between the military government of Argentina and the guerrillas was coming to an end, leaving behind the scars of war. For several years I lived together with Fr. Jorge, as we called Fr. Bergoglio, but I did not realize how greatly he was committed to the situation of the country. Looking back now, Fr. Jorge is not a person who talks about himself.

I always felt that Fr. Jorge demonstrates leadership and deserves respect as an elderly person with great experience. When I moved to the Jesuit theologate in San Miguel City, Fr. Jorge became my Superior. I lived there under his guidance about 3 years. When the theologate had been built years before, it was surrounded by greenery and there were few houses in the vicinity. But after a while many people moved into the area and when we were living there, it had developed into a large town. On weekends the Jesuit students went to various places to help at parishes. Our main activities were teaching catechism to children, serving at Mass, and helping prepare for parish events.

Fr. Jorge’s instructions were that we should not wait for the children to come to the church but to go around from family to family and bring the children to church. Needless to say, we were not always welcomed. Parents aside, on Sunday mornings children preferred to go out and play or to sleep longer rather than go to Sunday Mass. Nevertheless, as the years passed, our efforts took root and the children enjoyed having us visit their homes. Their sense of companionship grew, and they got the feeling that “the Church is our common house.”

Priests as well as leaders emerged from that area, and it continues to be a very active region. When Fr. Jorge became bishop, he would send his priests to places where there was no church building. They would sometimes put up a tent and meet the slum dwellers there, perform baptisms, offer the sacrament of reconciliation, and say Mass for the people. Christians who at the time had lost contact with the Church observed how the Church was reaching out to them and came to see its true reality.

Some 100 Jesuits lived in the theologate directed by Fr. Jorge, and many other students and professors commuted to classes there daily. But in spite of Fr. Jorge being very busy, he was always ready to meet people who wanted to see him, without giving the impression that he was busy. Now, in his position as Pope, he must be unimaginably busy, but he finds ways to get in contact with those who desire to meet him, as if he had plenty of free time.

Last September we were given approval for a special audience with the Pope in Rome. Along with his ordinary audience, he came to greet each one of our little group of 20 persons, listened carefully to our conversation, understood what we wanted to tell him, and gave us his message. Above all, even if he was slow to react, he affirmed, “I desire to visit Japan next year.” This message has had various resonances in the mass media up till now.

Fr. Jorge guided each one of us in promoting our decision making. Even when we asked him directly as our Superior about some matter, we would not usually receive an immediate reply. His attitude was that we would find the answer by reflecting on the matter ourselves. I went once to ask him for some permission. He sent me back saying, “Decide for yourself and report to me about it afterwards.” Fr. Jorge often had such unexpected reactions, and that gave us opportunities to reflect and foster a sense of responsibility.

On many occasions, the issues we proposed and our personal response became opportunities to dialogue with him as Superior and come to know each other. Thanks to him, since I was still only 20 years old, my attitude of “trying not to get him angry” changed to “become involved” and I was able to propose various plans.

After those years with him, I left Argentina and came to live in Japan. Since then, all I knew about Bishop Jorge was what other people said about him, but I am sure that he guided the Church with lively creativity and imagination. As already mentioned, he offered us seminarians opportunities to experience the hopes and the thinking of those who are discriminated against by urging us to visit the nearby homes of the poor and look for their children.

The present Pope is gifted with imagination. The famous photograph of the “boy standing in front of a crematory” is just one among many others that symbolize War. During my long stay in Nagasaki I do not remember how many times I saw that particular photo, but because I had seen numerous photos of the tragic bombing of Nagasaki, it did not especially stand out in my mind. The fact that Pope Francis selected that photo and distributed it widely made it a symbol of the results of War and made me feel a spark of his genius. Needless to say, I cannot affirm that he selected it himself, but his use of it makes me feel his sympathy and concern.

During the “Synod on Youth” he invited many young people to interact with the bishops. I think that must have been the first time such a phenomenon occurred. According to the participants, every morning the Pope attended the discussions and had coffee with the participants. That made them feel they were his friends.

Francis, the present Pope, is considered an amiable person and, while the goodness he exudes continues to grow, I feel that he is putting it more and more at the service of people.

Let’s enjoy his visit. There are arguments for and against his visit, inside and outside the Church. Considering his health and his many obligations and realizing that many countries in the world have never received a visit from him, I think we should consider ourselves gifted. But, as one could expect, the Pope’s visit to Japan and what it will entail arise directly as the decision of the Pope himself and his counsellors and is based on careful planning. Perhaps the invitation from the Japanese side was only a formality, and perhaps the international mass media will be interested in what persons will want to meet him and what message he will deliver by going all the way to Japan. Because Saint John Paul II’s “Peace Appeal” was made here in Japan, it’s influence is still felt worldwide. In a similar way, let us hope that the visit of Papa Francisco and what he says in Japan will embody his intended mission.

Above all, I would like to join with all of you in supporting the Pope with our prayers so that the particular message he brings to Japan will be widely transmitted.