March 2019, just when Ichiro announced his retirement from MLB, we were in Seattle, the headquarters of the Mariners. Of course, we were not there to watch baseball, but we were visiting Seattle for an investigation.

In October 2018, in Washington State, where Seattle is located, the Washington State Supreme Court submitted a decision that deemed a death penalty case unconstitutional. The death penalty became substantially abolished. We formed a research group of 11 members consisting of lawyers, scholars of criminal justice policies and criminal law, and public activists. We decided to visit the site and interview related parties and people involved about how this decision became possible.

On March 13, just before we made our way to the U.S., the governor of California, Gavin Newsom, announced a halt in carrying out capital punishment. In California, there are over 700 convicts on death row, which is about one-fourth of all convicts on death row in the U.S. This decision has a very significant impact. The coordinator for our inspection tour was Yoko Otani-Spurlin, who works at California’s Death Penalty Focus, an organization working to abolish the death penalty. We were greatly interested in each item of breaking news in California that she told us about.

Washington State, located in the northwest coast, is one of the especially liberal states in the U.S. As a matter of fact, in 2014, Washington’s Governor Jay Inslee announced a halt to capital punishment. The death penalty is currently not carried out (2010 was the last execution). Under such circumstances, last October the Washington State Supreme Court ruled in the State of Washington v. Allen Eugene Gregory, a case where the convict was sentenced to death, that the death penalty was unconstitutional.

At the time, Washington State had eight convicts on death row. Allen Eugene Gregory was one of the eight. He is an African American who was sentenced to death for the rape and murder of a white woman in 1996. Gregory was a young man at the time of the crime.

Research by Professor Katherine Beckett of the University of Washington contributed greatly to last year’s decision which ruled that the death penalty was unconstitutional. Though not a jurist, but a sociology professor, Beckett has fully inspected all death sentences and life sentences that occurred in Washington State from the point of view of sociology and statistics. She concluded that there is a definite difference regarding race in all death sentences. (Death sentences issued to blacks were four times greater than those to whites). Lawyers have fought the issue based on this conclusion. As a result, death penalties where racial inequality is evident are considered brutal punishments, which are banned in the Constitution of Washington State, thus leading to the ruling that the decision was unconstitutional.

There is a case that must be considered when thinking about death penalties in Washington State. A serial murder case called the “Green River Killer” shocked the entire nation in the 1980s. A white male, Gary Ridgway, committed over 48 known murders. The entire scope of the case is still not clearly known. Based on his confessions, there are still many more victims. As a serial killer who went down in the U.S. history of crimes, Ridgway was sentenced to life in prison instead of the death penalty in exchange for confessing other unknown crimes. The difference in this sentence to life in prison for a white man murdering many people and the death penalty sentenced to a black man for murdering one person gives us an obvious impression of injustice. Finding a breakthrough for halting the death penalty from the perspective of racial discrimination using the Constitution is a very American way of fighting. 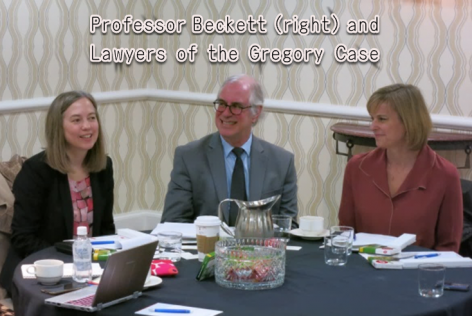 This way of fighting is not only the achievement of the lawyers in charge. Government-paid lawyers in the U.S. are guaranteed court costs that are much higher than those of Japan’s court-appointed attorneys. We cannot ignore this fact, as it allows for a high-quality defense. Furthermore, such high trial costs (one death penalty case costs more than one million dollars), as well as the death penalty having an extremely high cost, naturally also has a restraining effect. We were able to talk directly with Professor Beckett and lawyers of the Gregory case. We went to interview the human rights organizations American Civil Liberties Union (ACLU), which strategically supported the trial to halt the death penalty, as well as the Washington Coalition to Abolish the Death Penalty (WCADP).

We were also able to meet with the key person on the prosecution side. The chief public prosecutor of King County, located in Seattle, is a person who contributes discussions related to the death penalty in the local paper, The Seattle Times. In Japan, prosecutors give the impression of a closed, non- transparent group that prioritizes the protection of its own organization, which is nothing close to the style of prosecutors in the U.S. We received the impression that prosecutors in the U.S. are representatives of the public interest, and they acknowledge their duties and take pride in their work. 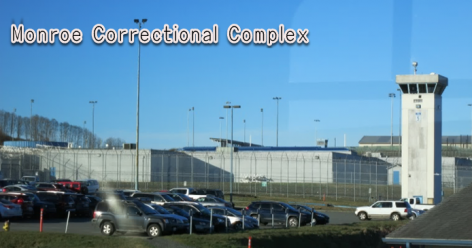 Another major objective of our investigation besides the death penalty was to investigate the actual situation of life imprisonment (known as LWOP, short for “life without parole”). We visited Monroe Correctional Complex, located in the outskirts of Seattle. There have been no present or even former convicts on death row here from the start. We actually wanted to go to Walla Walla State Penitentiary, a prison under the highest security alert, where there are convicts on death row, but we gave up the idea because it was too far away. Furthermore, I myself was looking forward to interviewing convicts serving life sentences, but we were not able to do so due to an incident that occurred on that day at the site. However, we received replies to our questions in writing from some convicts.

Filming was not permitted, so it is difficult to describe the inside of the prison. However, it was a similar sight to that seen in American films and dramas. There was a TV in the cell, and convicts were having friendly chats while they worked (convicts could choose to work, compared with the much-criticized forced labor in Japan) and played games. The difference from Japan was obvious. Actions were implemented to reduce garbage to zero, and there were personnel who emphasized the function of composts using earthworms and maggots.

What surprised us the most was the existence of conjugal visits, which allowed convicts to spend the night in dwellings with their partner or their family. This is only available in a few states in the U.S. However, this is a great difference compared with Japan’s procedure of meeting with spouses and family members through an acrylic board for only 10 to 30 minutes. To begin with, the thinking of communication with the outside world is the opposite from Japan’s way of thinking, which limits communication to the utmost. Rather, convicts in the U.S. have freedom, as they are allowed not only to send letters, but also emails as well as to make video calls, although inspection is made as a general rule.

It is true that the lack of restraint in American prisons should be not applauded, and there are still some aspects that are not humane. Furthermore, we must not ignore the inhumane aspects of the life sentence itself. As far as we could detect in the written responses from convicts, they expressed the life sentence as, “a slower process death penalty that makes no sense.” We could sense how hard it must be to live in a situation of no hope.

Another serious problem in the U.S. is the excessive issuance of life sentences. What is especially the problem is the Three-strikes Law, a system with a bad reputation. If convicts who already have criminal records for two serious crimes are found guilty for any crime, no matter how slight it may be (e.g. shop-lifting), convicts are automatically given the life sentence. With the death penalty gone now, everyone we met with said that there is a need to solve various issues relating to the life sentence.

The largest city in Washington State is Seattle, but the state capital is Olympia. We went to Olympia to visit the State Legislature and the State Supreme Court. We were able to interview several state politicians (all were Democrats) who have been submitting bills to abolish the death penalty for many years.

As the head of the state government, the Governor declared a moratorium in 2014. The head of the judiciary, the Supreme Court, has ruled the death penalty unconstitutional, but unfortunately, as of today, the death penalty has not been removed from the law. While state politicians welcome these actions, they are strongly aware of the need to completely abolish the death penalty and reform the penal system from the standpoint of the law as the remaining duty of the legislature. I felt that, as democracy plays an important role in the U.S., the separation of powers is functioning in a healthy and creative way. 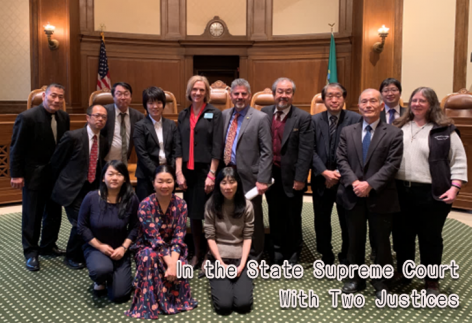 What I strongly felt through this investigation was that the U.S. is a society that greatly values justice and fairness. With Donald Trump serving as president, I honestly had doubts that the abolition of the death penalty would be put on hiatus. However, being able to witness some steady progress, I felt the real strength of American democracy. In the near future, the death penalty will be abolished from the U.S. Now, what will Japan do?