The Catholic Commission of Japan for Migrants, Refugees and People on the Move (J-CaRM) National Workshop 2019 was held in Fukuoka from February 28th to March 2nd, 2019. There were about 130 participants (priests, sisters, lay people, missionaries etc.) coming from all over Japan to attend this meeting.

Day One. Four speakers talked on several different issues; a Vietnamese Priest Fr. Peter Thoai talked on how he could better the life of Vietnamese living in Japan, Ms. Yamagishi spoke about the new immigration law that comes to effect from April 1st, 2019, “Zero Campaign Aspiration” was the topic of Fr. Takashi Seto (Caritas) and finally Fr. Marcel Kauss of Minoshima Pastoral Center spoke about drug addicts rehabilitation (DARC), the homeless, and foreigners.

Day Two. Field trips were divided into 3 groups. Group 1 – History of Forced labor and the situation of Korean School in Shimonoseki. Group 2 – Visit to the Old Site of Coalmining Area of Chikuho where people were brought to work without their will from occupied territories in the Korean Peninsula. Group 3 – Visit to a cow ranch and a vegetable farm where Technical Intern trainees work along the Chikugo River.

I was in the Group 3 field trip with 42 participants. The group’s guide was Mr. Iwamoto Mitsuhiro of Network for the rights of Technical intern trainees in Kitakyushu, assisted by Ms. Ariyoshi Kazuko from ACO / Kurosaki Church. And also Fr. Moriyama Shinzo of Fukuoka Colegio and Mr. Yoshida Tsutomu of J-CaRM. 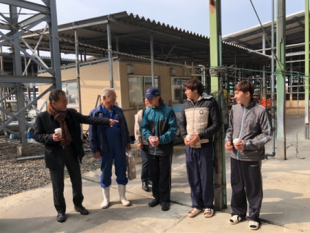 On our first stop at Haraguchi Ranch in Kanzaki, Saga, we were greeted by President Haraguchi, the owner of the cow ranch, Mr. Otsuka Rikihisa the Board Chairman of Fureai Cooperative Association and his assistant Mr. Kimura. We toured around the cow ranch and met up 3 Vietnamese trainees with whom we had a short conversation.

The second stop was at Ogori church (St. Francis Xavier) for a lunch break. After lunch, Mr. Otsuka gave a talk on technical trainees. He runs a company that brings in trainees from overseas to Japan. Initially he brought trainees from China, but now only Vietnamese. He explained that most companies that bring in the trainees are good companies which follow the proper legal terms, but there are also some bad companies too. It’s the same as with trainees, some are really good who come here to work and some are not.

Trainees who criticize the company for paying them a low wage, need to look into several facts. It’s common that those working in Fukuoka will get a lower salary (￥814 per hour) than Tokyo. Mr. Otsuka explained that it’s not just to compare the salary scale in this way. Every year about 5,000 trainees (3%) run away from their work place just before their visa expires.

Every month his company charges ￥25,000 fees to the trainees for coming to work in Japan. That amount includes 2 ways air-tickets and the handling of fees etc. He brings in 10 trainees from Vietnam per year. Mr. Otsuka explained further that one needs to look from the angle of the company, because they have to make monthly trips to trainees’ work place to check and to make a report and that causes expenditure for his company. He does not treat them just as employees only, but also creates a good communication environment for them i.e. going together for a trip, inviting them to his house for a barbecue party, year-end rice cakes making, etc. After completing the 3 years contract usually the trainees are thankful to Mr. Otsuka. 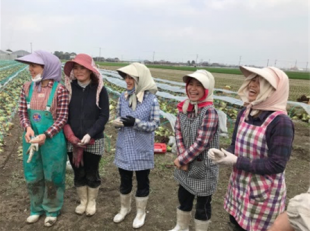 The third stop was an Ogata vegetable farm in Yasutakecho. Mr. Ogata, the President of the vegetable farm introduced 5 Vietnamese trainees working there. They looked happily working there despite, the cold weather during the winter and hot weather during the summer. The Vietnamese priest and sisters accompanying us spoke to them in Vietnamese for a while, but when time to leave arrived some of them started to cry. They felt a little sad and missed talking to someone of a Catholic faith. Some are Catholics who are not able to attend masses or receive holy-communion since the work place is located far away from a church.

The last stop was at Imamura Catholic Church (St. Michael Archangel) in Tachiarai-machi, Fukuoka. Imamura Catholic Church was built (1913 and was registered as one of Japan’s National Important Cultural Property in 2015) in the Romanesque style with red bricks and has two towers. As one of the few brick churches remaining in Japan, it is highly valuable.

Conclusion: I was glad to join the Group 3 field trip. It was an eyes opening for me to see the real situation that sometimes we need to see with our own eyes and to listen to persons that are in contact with trainees. It is not enough to obtain information through the internet or mass media. Often such information presents negative views of trainees coming to work in Japan. But, in reality, there are good companies in Japan who do take care of their employees.