What is happening on the small islands of Okinawa? ― Report from Miyako Island 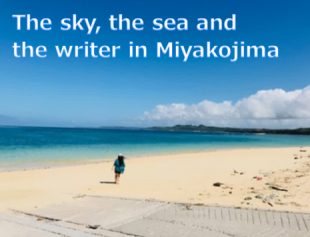 Miyako Island (Miyakojima City in Okinawa Prefecture) is located approximately 300 kilometers distant from the main island of Okinawa. It is in the center of the so-called Ryuku Arc, a string of islands fanning out from northeast to southwest. Some 55,000 people live on these small islands. It takes about 35 minutes to reach Miyakojima from Naha by plane. Natural beauty abounds on Miyakojima, and the people of these southern islands are kind and warm and full of healing charm.

However, Miyakojima has suddenly become involved in an obvious movement toward militarization. Approximately four years ago, the Self-Defense Forces (SDF) for the southwest islands were deployed there, and the construction of a missile base for the defense of the islands began in November 2017. Various military installations have been built in many places on the island. By March 2019, houses to accommodate 380 members of the SDF vanguard corps were already completed, and military personnel could move in there at any time.

In spite of opposition from local inhabitants, this new base was built, and anyone can see that the nature of our island has been destroyed. There are no mountains on the island, the highest elevation being only 115 meters. The view from a plane shows how flat Miyako Island is. There has been a Japanese military base on the island from the days of the Okinawa War, and now, even after the post-war return of Okinawa to Japan, there is still a garrison town of Air SDF on the island.

A new missile base has been built on the site of the Chiyoda golf course. There are houses there, too, where 800 SDF members and their families presently live. A helicopter port that had not originally been planned was also constructed, as well as facilities to store ammunition. A fuel station with seven 100-ton underground tanks has been built near the ammunition site. The station will supply not only gas for vehicles but also aviation fuel for helicopters. However, documents obtained in connection with a request to the Ministry of Defense from “the network of inhabitants who object to a missile base on Miyakojima” disclosed that an active fault-line runs under these facilities. A joint survey by the geology and engineering departments of the University of the Ryukyus shows that there is a cavity of 14 meters under the facilities. Groundwater which is a source of life as drinking water for the inhabitants flows through the cavity.

All water on Miyakojima depends on rainwater accumulated underground. The most active fault-line among all the islands of the area is found on Miyakojima. It is quite shocking to learn that the military base has been built right over this fault-line. If a big earthquake hits, the underground water will be polluted with fuel oil and lead, which is a raw material for missiles, and we will no longer have clean water to drink. Moreover, once the underground water is polluted, it will take a long period of 1500 years before it is purified again.

The Ministry of Defense has already admitted that the facilities were intended for the storage of ammunition of “small-fire equipment.” This is in conflict with the clearly regulated Explosives Control Law. Compared with the standard for explosives control, which requires a safety distance of 400 meters from a residential area, this storage facility is clearly contrary to laws and ordinances. At present, the inhabitants live only 100 meters away.

In addition, dump trucks go continually in and out the base and clean off the mud attached to the tires with water taken from the tanks of purified water used by several hundred families of workers living nearby. The Ministry of Defense claims that there is no immediate damage to health because the water is purified, but when we stand in front of the gate opposing the construction of the base, we can smell the filthy water, despite our nose masks, and sometimes I even feel pain in my throat. We are concerned also for the health of the workers engaged in the construction of the base. 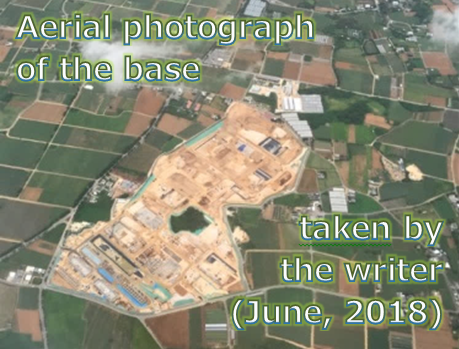 Moreover, the site where the base is being constructed has traditionally been an Okinawan folk-religion prayer site, called Utaki. Utaki occupied an area of 7,300 square meters, but because of the building of the military base, its land has been reduced to just 4,000 square meters. This land, an important prayer site for the inhabitants, is sacred but can no longer function as a prayer site. The wishes of the inhabitants have been denied, the forest has been reduced, and the wells have been covered.

Furthermore, many foreign workers (Technical Intern Trainees) work in the construction there. However, the daily wage of a worker from Vietnam is only approximately 4,500 yen. It is said that the daily wage for workers from Miyakojima is 10,000 yen, and the daily wage for workers from Honshu exceeds 20,000 yen. Clearly, foreign workers face unfair labor conditions and their living environment is of great concern. Even if we ask the Minister of Defense to rectify the situation, his answer will be, “We entrust everything to the agents employing the workers.” The actual situation will not change.

Nevertheless, this is not the only problem troubling the inhabitants of Miyakojima. The construction of storage sites for large-scale missiles will soon be finished in the eastern Bora area of the island. There is a Catholic Church there, whose beautiful white roof and soaring cross can clearly be seen from the planned site of the ammunition chamber. Originally, Bora was famous for the ruins of a mine from which Ryukyu marble was excavated, and that is where the ammo chamber is going to be built. The village is only some 200 meters away from this Bora mine.

Furthermore, in the Hirara harbor of Miyakojima, pier construction to accommodate a cruise ship is being pushed forward at a rapid pace now. Actually, this is not merely a sightseeing ship, but the “Izumo,” the Maritime SDF’s greatest escort ship, redesigned as a carrier. The Minister of Defense has made it clear that this will be the home port of this carrier which has the capacity to carry “F35B fighters” with the possibility of landing and doing vertical takeoffs.

In addition, the airport on Shimojishima is connected by a bridge to Miyakojima. Jetstar Airways started direct flights to Narita Airport last March. Twenty years ago, the Shimojima airport was one candidate site to replace the Futenma US base, and the Minister of Defense at the time went to inspect it. Plans for a military-civilian airport there were often made.

In addition, the joint training ground for US military forces and the Japanese SDF will be at the Takano fishing port. The US Armed Forces and the Japan SDF plan to conduct joint training on Miyakojima for a missile corps in case of emergency. A photograph of the training attack in case of an emergency is posted on the Facebook page of the US Armed Forces. Base construction and other military installations can easily be observed everywhere around the island, and there would be no end to giving specific examples here. Military installations for all the land, sea, and air forces have been established. Authorities say that this is pertains to the national administration and does not require accountability to the inhabitants.

I mentioned earlier the groundwater, the rainwater accumulated naturally underground, which is used not only by the inhabitants but also by the many tourists visiting the island. Large resort hotels are being constructed on the island, and nearly one million tourists come here every year. Many more are expected to arrive in 2019. If 800 members of the SDF with their families come to live on Miyakojima, there is a possibility that the groundwater will eventually be depleted. The building of a military base is intended for waging war and destroys the natural environment. Thus, at some future time nobody will be ever able to live on this beautiful island.

This is the situation of Miyakojima at the end of February 2019. Aside from Miyakojima, similar realities are occurring on neighboring Ishigakijima and the Amami Islands, too. The small islands of the southwest are exposed to crises. One must not overlook the problems of Henoko, Takae, and similar areas of militarization around the southern islands.

So, how should we Christians view this problem? Unfortunately, even if our weak voices cry out, they will not be heard and we will be turned away. I live in Miyakojima, 300 kilometers away far from Henoko in the main island of Okinawa, I am sometimes asked about the situation on Henoko. In fact, few people are actually aware of the militarization of Miyakojima and the southwest islands.

The word “love” (kanasu) is very much in use traditionally in Miyakojima. The word means “love people so much that it becomes truly painful.” It also means “feeling the deep compassion” that our Lord used to have. I was not born in Okinawa, but I want to continue standing up for the smallest person (Matthew 25:40). What can we do? It may seem simple, but first “we should know the present situation.” If we believe in acting with solidarity, clear hopes and roads will open out for us. 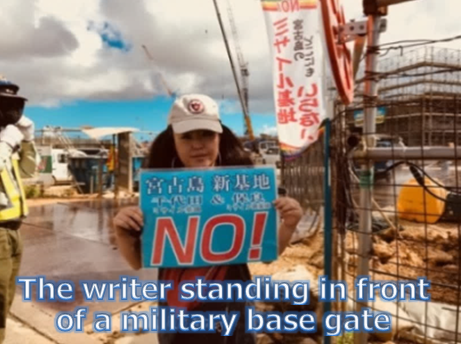 Additional Note
By the end of this year I intend to open a guest house in our church, at a reasonable cost. All the members of our church want you to come and visit our new guest house. We greatly desire to come together with everyone to think about peace. With love.