How we, as Christians, should view the Emperor’s “Succession”?

I. The “State Shintoism” that remains under the Constitution of Japan
As we contemplate the theme of “emperor’s succession,” let us first clarify the fact that some traditions have continued without change from “pre-war” through the “post-war” years. Some traditions that appeared to have been discontinued, but in fact only remained hidden like an “ancient layer,” or as “thoroughbass,” will surface in connection with the “succession.” We need to identify what remains “continuous” from pre-war to the post-war years.

After the war, the State Shinto system was dismantled…on the surface. The “Shinto Directive” of 1945, which was supposed to dismantle the State Shinto system, moved from a state institution under the Home Ministry to a new body as a religious corporation, Association of Shinto Shrines. Due to a history of state-imposed visits to the Yasukuni Shrine, and the church’s acquiescence to this enforced duty, Christians in Japan are very sensitive to the issue of visits to the Yasukuni Shrine. Symbolic of this is the Yasukuni Shrine Incident of 1932, a controversy that arose when several students of the Catholic Sophia University refused to bow as instructed at the Shrine. However, the true nucleus of the State Shinto system is not Shinto shrines, but the court rituals that revolve around the imperial household. The fact is that, the court rituals performed by the emperor have continued after the war without any changes. Despite the emperor’s issuance of the “Humanity Declaration” (formal renunciation of divinity on Jan.1, 1946), the emperor’s duty to perform imperial household rituals (as mythic heir of the Great Sun Goddess and Chief Priest of the Shinto faith) remains in place today.

The work that is done by the emperor through the year has not been widely known in the post-war period. The work that SHOULD be done by the emperor is written in the Constitution of Japan. Article 4 states, “The emperor shall perform only such acts in matters of state as are provided for in this Constitution,” which are listed in Article 7. Despite this stipulation, in fact the emperor vigorously performs many works besides matters of state. Visits abroad and memorial trips are categorized as “not matters of state, but of public nature,” as are New Year’s open visits to the imperial palace, palace banquets and visits to the regions. These activities are reported by the mass media and widely known and advertised among the public, but have no basis in law. Although they are not stipulated in the Constitution, such activities have been given a legally baseless name, “public activities.” On the issue of work performed by the emperor that goes beyond the Constitution’s stipulation, I will not discuss these here, but on another occasion.

There are also activities categorized as neither “matters of state” nor “public activities,” but as “private activities.” The word “private” might lead one to think these are “the emperor’s private” matters, but it is among these “private activities” that we find the most important duties of the emperor. I am referring to “court rituals.” It is precisely these court rituals that are Shinto religious rites performed throughout the year, mainly in the Three Shrines in the Imperial Court located within the imperial palace (Cf. following picture). 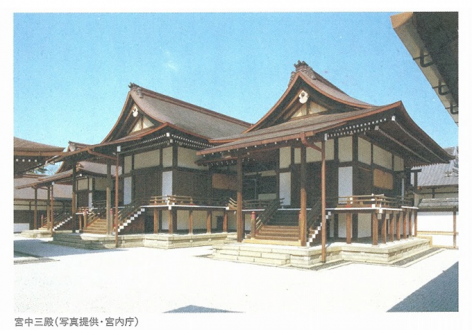 The “Three Shrines in the Imperial Court” refers collectively to the “Imperial Sanctuary” (Kashikodokoro), where the Great Sun Goddess (Amaterasu O-mikami) is enshrined, the “Imperial Ancestors’ Shrine” (Ko-reiden), where the spirits of past emperors and imperial family members are enshrined, and the Sanctuary (Shinden), where the gods of heaven and earth (Tenshin chigi) and the myriad Shinto gods (Yaoyorozunokami) are enshrined. In these Three Shrines of the Imperial Court the emperor performs throughout the year, as Shinto’s high priest, religious rites dedicated to the myriad gods, chief among them Amaterasu O-mikami, that are mentioned in the foundational myths of the Shinto faith. 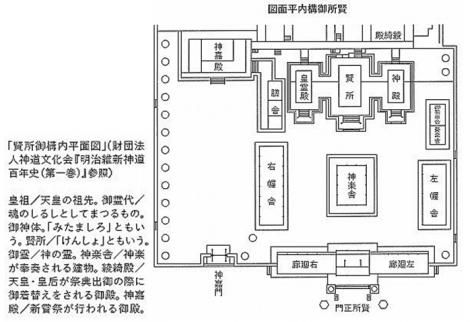 Under the Constitution of the Great Empire of Japan which governed the pre-war “theocratic emperor system,” imperial household rituals were declared by the Ordinance of Imperial Household Religious Rites to be matters of the state associated with the emperor, and these events throughout the year were of central importance in the State Shinto system. The former Imperial House Law that fixed the imperial rituals, the Ordinance of Imperial Household Religious Rites that laid down the rites to be performed within the court, and the Regulations Governing the Accession to the Throne were all annulled on May 2, 1947, one day before the post-war constitution came into effect. This was done because these laws were judged to be in clear violation of two important principles enshrined in the new Constitution; Sovereignty of the people, and Separation of state and religion. But on the next day, the very day that the new Constitution came into effect, Takao Ryoichi, who was Chief of Secretariat Documents Section of the Imperial Household Office, issued a notice on the orders of a superior that stated, “Where previous stipulations have been nullified, but new stipulations have not been created, affairs shall be handled in accordance with precedent examples.” “Precedent examples” means according to the very examples that were discontinued on the day before the new Constitution came into effect. In other words, even though laws that stipulated imperial rituals, like the former Imperial House Law, were discontinued, those rituals continued after the war just as before, exactly according to the “discontinued” laws.

II. The appearance of court ritual as “acts of the State”
Court rituals are normally hidden within the imperial palace and do not come into public view, but some of these rituals will soon appear before the public in the form of succession ceremonies, which is the theme of this article. At the 3rd meeting of the Preparatory Committee for the State Ceremonies of the Abdication and the Enthronement, the 2nd set of basic policies concerning the performance of ceremonies was decided as follows:

“As the ceremonies which were performed to accompany the Heisei succession received ample consideration under the current Constitution, the basic rationale and contents of various ceremonies should follow the previous pattern on this occasion, also.”

This basic policy states that “the ceremonies … received ample consideration under the current Constitution.” However, the reality is that all of the rites in question follow models that were laid down under the pre-war imperial Constitution, through the Ordinance of Imperial Household Religious Rites, the former Imperial House Law and the Regulations Governing the Accession to the Throne, which embodied the State Shinto system. In concrete terms, the rites are an expression of the notion that the emperor inherits the divine right of rule exactly according to the oracles of the Great Sun Goddess.

All of this signifies that previously hidden court rituals will appear before the public as “affairs of the state,” or “public events,” not as “private acts” of the emperor, and that these ceremonies will be presented publicly for the second time in the post-war era and thereby be firmly established as precedents demonstrating that they do not contravene the principle of separation of state and religion. It means that court rituals, however religious the ceremonies might be, will be placed beyond reach of the principle of separation of state and religion.

III. What we must grasp as Christians
Christians must first take seriously the Bible’s teachings, that the worship of gods, as seen in Shinto court rituals is, from the Biblical worldview, heathen worship that cannot easily be accepted as “culture” or “imperial household traditions.” This is to say, rituals that worship gods that are not the Lord Creator are forbidden in the first of the Ten Commandments to coexist with the worship of the Lord Creator, and such rituals blemish our worship of the Lord. In other words, the performance of succession rituals that are based on the oracles of the Great Sun Goddess confronts us with the problem that the Japanese government is seeking to perform, as acts of the state, ceremonies that are an affront against the good conscience of our faith. I think Christians must first be mindful that we have been placed as God’s people in a land where the government worships Baal as an act of the state.

Peter’s reply to Jesus in Matthew 16:16, “You are the Messiah, the Son of the living God,” clearly means “ONLY you are…” It does not mean “You, TOO, are one of the gods,” but is a confession that “There is no God but You.” Confessing this faith in this time is to remain mindful that “the emperor is not a divine entity, but just a human being created by God.” Those who confessed that “the emperor is not a god” in the years before and during war were repressed for the crime of lese-majesty and driven out of society as rebels against the emperor-centered “national polity.” And in this society, Christians who feared man above God were unable to stand firm in their confession that “You are the only God.”

Our faith is about to be tested again today. Amid expressions of the emperor’s divine authority in the imperial succession ceremonies, will we have the strength of faith to confess “You are the Messiah, the Son of the living God,” or to clarify that the emperor is also a sinner who must repent before the Lord Creator, or to go against the festive mood and say NO to the advertised “divine authority of the emperor”?

These questions are important not only for protection of the faith of Christians, but also for our ability to help the society created by God to become a healthy society. Under the pre-war State Shinto system, Japanese society didn’t permit even a single exception to refuse to worship the emperor. Diversity was not accepted and refusers were ostracized as unpatriotic. This was a tragedy caused by an attempt to unify the people by enforcing the beliefs of a particular religion. Unlike God who created humankind, gods created by humans can only be viable if they are propped up by people. The existence of just one person who does not believe exposes the frailty of that which is created by humans. The presence of one person who does not worship transforms the place and moment into something like a balloon without air, or a soda without the fizz. The God who creates and supports all beings needs no human to prop God up, but people who seek to establish a god that is unviable without human propping are threatened by the existence of just one person who refuses. This is why such societies become intolerant and cannot permit exceptions.

Conversely, this means that if there are only a few people, or even one, who believe in the true Lord Creator and confess faith in the true God, and who refuse to worship false gods, their existence holds the power to expose society’s falsities. This small minority possesses no worldly power, nor authority, nor momentum. They only have faith that trusts in God, who “Created the world by God’s word, and sustains it today.” People who unwaveringly believe the word of God, who respect diversity, value each person above assimilation and, especially, who respect the good conscience of an individual human being, become an important presence that can teach the essence of how society should be.

Beginning with the announcement of the new era’s name on April 1, we can expect media to be saturated with reportage of the emperor’s abdication ceremony and the steps toward the accession rites. Through the media we will surely be subjected to a grand propaganda campaign advertising the “emperor’s divine authority.” Amid this we will probably witness criticism and ostracism against people who oppose the ideology of divine authority of the emperor. In the midst of all of this, I believe the presence of people who say “The emperor is no more than a man who was created by God” and who say NO to the emperor’s “divine authority” will be increasingly important in this time and this society.