The Year 1996 marked a new historical step in education. The Cristo Rey Jesuit High School came into being in Pilsen region of the South West Chicago. This region’s name originates from the name of a famous Czech City named Pilsen. During the 19th century a large number of residents in that region migrated to the United States. Then, beginning in 1950, Mexican migrants started to increase and by 1970 Hispanics originating not only from Mexico but other Spanish-speaking migrants as well settled in that region and accounted for the majority of the population there. Most of them were day workers. They desired to provide good education for their children, but local public schools were already filled, and gangsters exerted a big influence inside the schools. Over 50% of all Hispanic high school children withdrew from school at that time and only 10% proceeded to university.

Cardinal Joseph Bernardin of Chicago archdiocese, searching for what the Catholic Church could do for the increasing number of Hispanic migrants, most of whom were Catholics, gave an outside impetus to the founding of the Cristo Rey movement. He asked for the cooperation of the Jesuits. The provincial of the Chicago Province quickly considered the request of the Cardinal and appointed Fr. Jim Gartland for the task. He went into the town and listened to the street children and those working in the schools of the region and local churches, and looked at the survey data gathered by the municipal city administration’s local offices. Some of the findings showed that there were about 10,000 children of high school age living in that region and that some 75% of them had withdrawn from public high schools. He found out that no more than 3% were university graduates. He also understood that, even if more of the current type of private schools were to be founded in the United States, a country that usually does not admit the provision of public funds for private schools, families living in that region would not have enough financial means to pay their children’s school fees.

He noticed that the children could work in order to be able to pay their school fees. Schools and companies could sign contracts with the newcomers. Four students with the same level of skills could constitute one team sent to a company to work while alternating with other students. In other words, classes of 50 minutes each or 4 credit units could be conducted 4 days a week with one day a week left open for jobs. High schools in the USA are 4-year schools. The students work by turns 5 days a week. The year they are in decides the day of the week they will work in a company. For instance, for the first-year students it will be on Mondays, for the second-year on Tuesdays, and so forth. Again, for the day left over, once every 4 weeks the 4 years take turns working in the same place. Their jobs consist in assisting white-collar employees. The work differs according to their occupation. For instance, in San Jose HP Inc. the job consists in building data base, surveys on support models for consumers, game testing, building web sites, marketing research, and so forth. 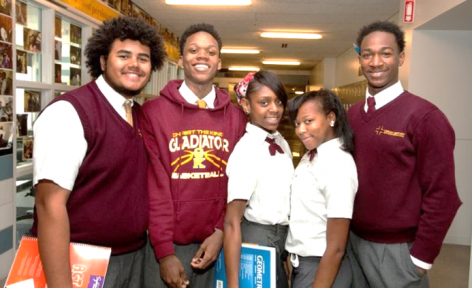 The first Board Chair of Cristo Rey Jesuit High School was Fr. John Foley, former Jesuit provincial of the Chicago Province. Together with Fr. Gartland among others, his important task in the founding of the school was to look for job opportunities where the students could work and to raise funds for founding the school. Graduates of Jesuit schools, especially those of Chicago’s Saint Ignatius College Prep and Cleveland’s Saint Ignatius High School, cooperated.

At the beginning, it was not easy to recruit students and advance them to an upper grade but, since their basic education was solid, many parents wanted their children to advance to university studies. Moreover, the students did not work just to pay their school fees. They also got interested in the jobs they were doing and had the opportunity to meet with other workers in the same workplace. That gave them an opportunity to cherish dreams about their future. As a result, most students got university scholarships.

The educational program that began in Chicago matched the requirements needed in big American cities. At present, some 12,012 students are enrolled in 35 schools. Many schools inherited the name Cristo Rey, but in some regions where African immigrants are a majority they use the English name Christ the King. In 2003 the same type of school opened in Denver with the name Arrupe Jesuit High School. Each school has an independent Board of Trustees and its own accounting system. Payment to the school by the parents does not come even close to the 10% of the school’s budget. In general, about 50% of each school’s budget goes to the corporate work study program. Donations from corporations and individuals cover around 50% of the whole budget. 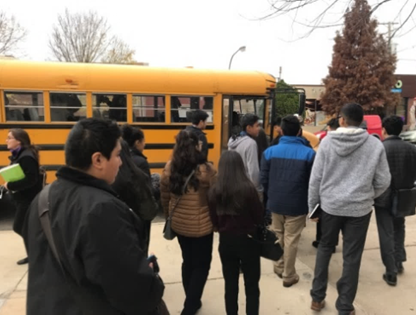 All schools linked to the Cristo Rey Network require great patience of the youngsters attending them. There are differences in the running of each school but, for instance, in the case of Chicago Cristo Rey Jesuit High School, on the day students have to work, they go first to school and get a free breakfast there before the 8 a.m. morning gathering. In case there is a different job ready for them that day, they will be briefed before they get into cars bringing them to their workplace. The school also checks their clothes. All jobs meet legal work regulations and are done within an 8-hour day. Since they work by turns 5 days a week over a period of 4 weeks, their schedule is very demanding on days when they have classes. The first class starts at 8:00 a.m. and the last class ends at 4:00 p.m. With variations according to different levels in the school, they can have a free lunch sometime between the fourth and sixth period classes. They can also use the ninth period to review their lessons or for private reading. Those with bad scores can receive supplementary lessons. After class they engage in sports or other extracurricular activities. 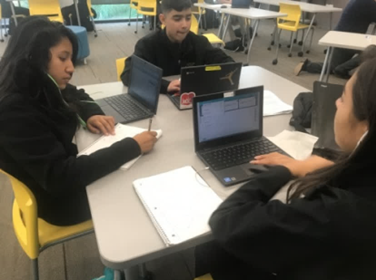 The ones supporting the school life of the students are teachers and staff. One school noteworthy for its program is the Cristo Rey Jesuit High School in San Jose, California. Here, individualized learning is provided. Classes consist in lectures and group discussion. Each student makes full use of his or her own computer to contact the teachers and expand their learning. This bespeaks its location in Silicon Valley.

The corporate work study program has a special group of teachers who do not only lead the students from the beginning of the morning gathering but are also engaged in evaluating their jobs and taking care of contacting the workplaces. Again, the Cristo Rey schools have, as a priority, to provide education oriented toward entering universities. The grades received at school are not the only priority. It is also necessary to select universities where sufficient scholarships can be obtained. Specialized staff members listen carefully to the students’ desires and, by contacting universities, provide advice to the students. Mental advisers are also important. There are often quite a few students who face difficulties due to a lack of ability to study or to lead their school life. There are also some who suffer from domestic problems or who have become victims of violent social environments. Spiritual counselors also cooperate with the schools.

Twenty-two years have passed since the first school started in Chicago. Cristo Rey schools have to face many problems, such as the recruitment of their educational staff, the search for cooperators among companies, recruitment of students, and the troubles students encounter. Cristo Rey is serving the future of youngsters.

What could be done in Japan to assist the many children from foreign countries living here to build their future? The Catholic Church and society at large are being challenged.