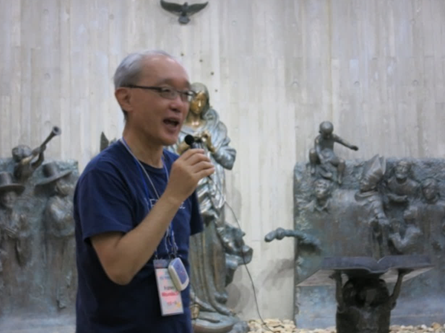 Seven and a half years have passed since the Fukushima No. 1 nuclear power plant disaster, and the general attitude in Japanese society has become more keenly aware of the actual dangers. Public opinion approving the abolition of nuclear power plants has already surpassed 50%. Nevertheless, the Japanese government and private electric companies are continuing to reopen nuclear plants. In 2011, before the Northeastern Japan disaster, 34 nuclear plants were functioning out of the 54 owned by Japan, which is ranked third among countries with the greatest number of nuclear plants. There were no nuclear plants functioning for two years after the accident, but now two in Kyushu and four in Fukui Prefecture are now active and several more are preparing to function again.

The official policy to accelerate the reconstruction of Fukushima has resulted in gradually lifting restrictions on officially designated evacuation zones. Under the pretext of reconstruction, people have been urged to return and payment of indemnities and compensations to the evacuees is being terminated. The no-charge rental apartments for Fukushima people who moved to zones not designated as evacuation sites were terminated in March 2017, and following the evacuation instructions, the fee compensation offered to evacuees for renting apartments was terminated in March 2018. Reparation compensation for Tokyo Electric Company damages also ended the same month. The government is determined to bring closure to the Fukushima nuclear disaster on the occasion of the new Emperor’s accession in 2019 (ending the Heisei era) and before the 2020 Tokyo Olympic Games. Nevertheless, future prospects for evacuees have been unilaterally thwarted and many are suffering greatly in their daily life.

The Japan Catholic Council for Justice and Peace (JCCJP) has the dual role of making people aware of the need to abolish nuclear plants and of informing the public about the dangers of nuclear energy. Our Council for Justice and Peace cooperates with civic movements actively opposing nuclear plants, with the “Goodbye to nuclear plants: the 10-million action Movement,” and other similar movements of other religions, as well as with an independent group of Catholic lay people to assist voluntary evacuees, which is presently assisting in court cases.

However, there is a delicate conflict within the Catholic Church between groups advocating for “accompanying victims” and those claiming the need for “public awareness of dangers of nuclear energy.” These differences reflect varying viewpoints and awareness of the degree of radiation still remaining. Those who stress accompaniment take a permissive attitude towards radiation. Catholic mission schools and universities send young people to work as volunteers in hot spots of contaminated zones and eat vegetables produced in Fukushima. There is fear that these children are not sufficiently warned of the dangers involved in eating that food. The good will to assist evacuees returning to Fukushima is a good Catholic activity but, more importantly, acting in accord with the official policy that “the nuclear disaster in Fukushima has been resolved” only tends toward unconsciously abetting this official policy.

Talk about the danger of still actively contaminated radiation is taboo in Fukushima and those evacuee mothers who returned there of their own will deny the reality. Thus, there is a situation of division among the population there. I think that the Church should continue its stand of accompanying victims and at the same time should make efforts not to forget those forced to live in such a difficult situation.

With this in mind, I think we should consider occasionally inviting children living in Fukushima to naturally healthy areas for a while during their holidays and let them play there freely. Children living in Fukushima cannot afford to do that on their own. Through this kind of recreation, the children will be able to recover their immunity. It is believed that, by offering them such opportunities, these children will be able to recover from adverse physical conditions due to radioactivity.