Okinawa Experience of Seminarians (2) Justice and Peace of God

As Jesus drew near Jerusalem, he saw the city and wept over it. As we know, there is not much in the Bible that expresses Jesus crying directly. So I tried to figure out what made Jesus so sorrowful.

I participated in the Korea-Japan Social Apostolate Meeting in Okinawa in early November. The theme of this meeting was “Promotion of Peace in East Asia” and naturally I talked a lot about the war that happened in Okinawa and the military bases of US in Okinawa. In addition to listening to lectures and discussions, we also toured the area where the actual battle was and participated in demonstrations for peace in front of US bases. One of the most impressive slogans of the demonstration was “There is no need for war and violence in the future of children”. I have had two surprises during these experiences. 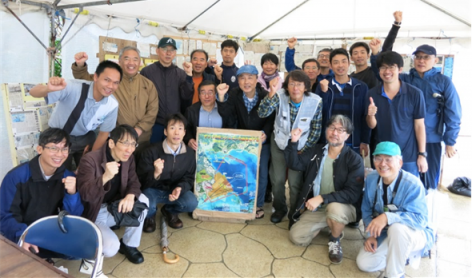 Most participants who attended the meeting were unfamiliar with the military base, and were particularly surprised to find that there was a military base near the residential area. But I was not surprised at all that I served for five years as an officer in the Air Force just before joining the Society of Jesus. What I did was to teach the soldiers. My disciples are now repairing airplanes at the military airfield, working at the control station and operating weapons. I taught them to work harder. I wanted my work to help keep peace. I also thought that when I was serving in the military, as the military base is nearby, the citizens were safer because the base protects the citizens.

However, residents near the base are always afraid of the danger of training accidents and the anxiety that they may get caught up in war again. As we know well, peace can only be achieved through peace. Unlike the others, I was able to see how violent the culture of violence was for me, about such a frustrating self.

During the five days of the conference, I asked, “Why do people do things like war?” I thought of the big and small strife in the world, facing the pain of many victims and left behind families. I also reflect about violence in me. I have a feeling that I want to win even a small job, at least I do not want to lose. I was also pursuing my interests and still trying to have more. I am clearly involved in the culture of violence. Then I was embarrassed and saddened.

Another was the actions of those who were in charge at the time of the war. The defeat is obvious, and fighting increases the number of innocent victims, but the army chiefs have chosen to commit suicide rather than accept responsibility for defeat, so that more people have been sacrificed. It was because they were right to be loyal to the Emperor without defiling honor. I thought how many people would be sacrificed by wrong ideas and education.

Jesus was so grieved that this same thing would happen in Jerusalem. We do what we think is right and expect it to be helpful to oneself and to someone. But just as it is proclaimed in the book of apocalypse, Jesus is the only one who can justify what is right and wrong. Each of us counts on our own standards, but the end of our self-love is violence against himself and his neighbors. Rather, we must remember more about what Jesus said, how he behaved, and how he felt.