At the Korea-Japan Social Apostolate Meeting in Okinawa, attendees heard from Bishop Wayne Francis Berndt, O.F.M, Cap, Bishop of the Diocese of Naha. Bishop Berndt’s talk was focused on the demographics of the diocese, Okinawan identity, and current issues over the American military bases which have been in the news recently with the election of Denny Tamaki as Okinawa’s governor and the construction in Henoko for the replacement of the American air base in Futenma. 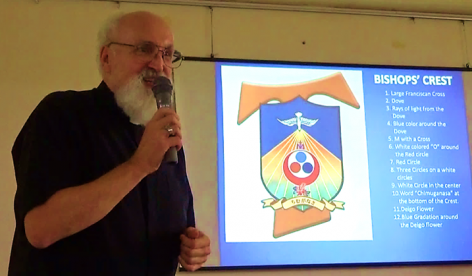 Before diving into the core of the talk, Bishop Berndt shared his official seal that was made when he became a bishop. When he commissioned Mr. Oshiro to create the emblem, he wanted it to be made by Okinawans, for Okinawans. For example, the white and red circles of the Okinawa prefectural flag are used alongside three smaller circles which represent the sea, land, and sky in symbolism of the Okinawan belief that they have no control over their air, land, and sea, the changing hue of blue signifying the growing peace movement, and Hiragana with the Okinawan phrase chimuganasa which translates to “you are loved.”

A major topic was the demographics of the Naha Diocese: there are 6,000 worshippers who are majority elderly and scattered among the parishes of the diocese. Among the international groups represented are Filipinos who were typically represented in the local entertainment and restaurant industry and have been exploited, the Spanish-speaking community which is dominated by Peruvians, and the Vietnamese who are the fastest growing group with the surge in technical intern trainees originating from Vietnam. Bishop Berndt also touched base on the cruel labor standards that the technical intern trainee program has shown through the many promises given and little actually received.

Bishop Berndt then transitioned to local initiatives that the diocese has focused on. Among them is the annual summer camp for Okinawan children and are led by college students returning from mainland Japan. This camp allows both the children and the college students to be themselves as Okinawans and not as what mainland Japanese expect them to be.

Another local program is the pilgrimage during Irei no Hi (Day to console the dead) to remember those lost in the Battle of Okinawa during World War II. This pilgrimage takes participants to a mass grave mound of the battle’s victims.

The sounds of military helicopters overhead contributed to the next major point: the American bases in the island. 70% of the American military in Japan are in Okinawa and take up over 20% of the land area. One of the major installations is the Marine Corps Air Station Futenma which is surrounded by the city of Ginowan. After the war, Americans justified that there were no residents around when the base was built but failed to consider that Ginowan was wiped out during the battle.

While the desire to move the base from Okinawa is there, the concept of chimuganasa comes to mind as Okinawans do not want others to face the burden of military bases that they face. Yet the passion for protest could be seen as what occurred when the local population came together to protest against the deployment of the Osprey tilt-rotor helicopter. To the Okinawans, the military bases are a symbol of discrimination by Americans and mainland Japanese, that their efforts are there to protect human lives, and that this is a response to the distrust that is perceived by the lack of American and mainland Japanese cooperation in providing a platform for Okinawans to express their voices.

The talk then moved on to seeing gospel values espoused via Okinawan culture. For example, Icharibacho-de means “if we meet once we are brothers” and is reflected on the acceptance of Bishop Berndt as among Okinawans as it is local belief that those who choose to truly live and stay with them will become family. In fact, the community has embraced Denny Tamaki who is of mixed heritage as the governor of the prefecture.

Another concept is that of chimugurusan which translate to feeling the pain of others and to use it to become stronger. A prominent example is that of the yui knot which is the location of the strongest pieces of a rope that was once cut apart but tied again together.

Another area that Bishop Berndt shared was the people he saw as heroes. He saw it in Martin Luther King Jr. who correlated scripture with American constitutional values in his speeches, how Gandhi peacefully managed to win self-determination for India from the British and how he asked any British supporters to stay behind at a certain point in order to allow the Indians to symbolically lead themselves.

While there may be two giants within indigenous land－that of the Americans and Japanese－Bishop Berndt has faith that in their own territory, a united Okinawan movement will be stronger than either. He hopes to find such a leader rising among the Okinawans who will combine the gospel with non-violent liberation and to raise the consciousness of Okinawan language and culture. Okinawans are not just the gardeners and cooks, but also the leaders and teachers. 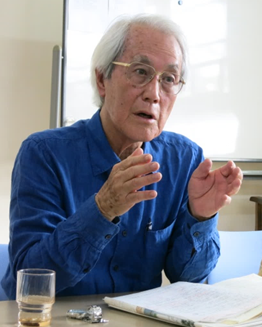 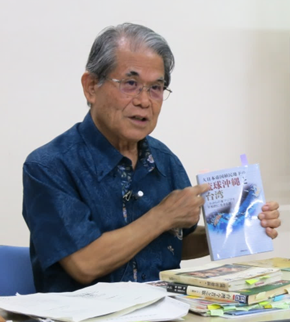