The JCAP Social Apostolate Workshop took place at the Jesuit Retreat House, Seven Fountains, Chiang Mai (Thailand) from August 13 to 17. The 32 participants were Jesuits and lay collaborators. Fr. Nakai and the writer of this article also participated in the workshop. Here is the content of the main issues discussed there.

“What is the difference between our social centers and NGOs? What is Jesuit about our centers?” These are questions we often ask ourselves, but do we really take them seriously? Many social centers were started by individual Jesuits and their existence is taken as a sign of the identity of their institutions. But is that enough?

The main theme of this year’s workshop on the social apostolate in the JCAP region was “Cultivating the Jesuit Identity of Social Ministries.” The workshop sought to answer these questions and addressed organizational weaknesses often found in Jesuit social centers. 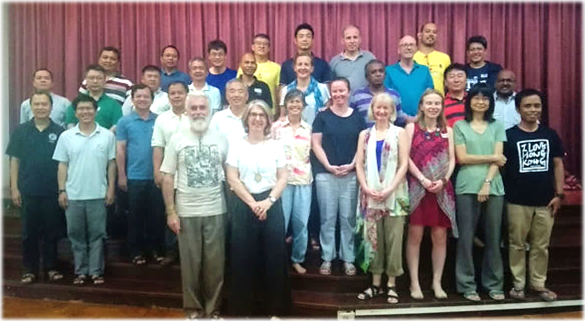 The workshop consisted of four parts. First, JCAP President Fr. Tony Moreno SJ spoke of the new directions with regard to on-the-make Universal Apostolic Preferences of the Society that JCAP is likely to take in light of the message of reconciliation from General Congregation 36.

Next, Fr. Xavier Jeyaraj, Secretary of the Social Justice and Ecology Jesuit Secretariat in Rome, described the social justice concerns the Society has had over the years and new challenges for the future. Today, particularly, we face serious challenges from crises of democracy, serious ecological degradation, and increased migration. 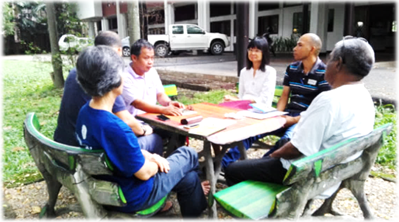 The second part considered how to answer the question of identity. Julie Edwards, CEO Jesuit Social Services Australia, explained our apostolate using the image of a tree. The roots of the tree represent our faith, Ignatian heritage, and Jesuit tradition. In other words, the Bible, especially the New Testament, shows us Jesus’ life; the Spiritual Exercises and the Constitutions show us our Ignatian heritage; and recent official documents show us our Jesuit tradition. Jesuit apostolates must be solidly grounded in all those elements. This concerns not only Jesuits but also all those dedicated to Jesuit apostolic works and in particular to those responsible with the direction of these works. The trunk of the tree represents the basic principles of the organization’s activities, the practical frameworks, and business procedures. The leaves are the people the organization serves; the fruits are the work done and at the same time the source of hope and joy offered by the actions taken.

Garry Roach, General Manager of Practice Development JSS Australia, explained how these principles can be put into practice. He encouraged us to develop a unifying narrative or story, explain it in an accessible format, and reinforce the narrative in word and deed in multiple ways, assessing progress against the narrative and supporting the staff from the beginning until the end of their employment.

In the third part, the dual situation typically faced by Jesuit social centers concerning the tensions that arise from the environment in which the work has to be done was adopted. At the same time, the relationship between research and action was also considered. Basically the Jesuit social apostolate operates within a delicate political atmosphere as it attempts in providing solutions to the issues while confronting traditional challenges.

Following his experiences of working in Mainland China, Fr. Fernando Azpirot, Director of Casa Ricci Social Services, gave an outline of how an environment of dialogue can be established amidst political constraint.

Again, Fr. Pedro Walpole, JCAP coordinator in the field of reconciliation and creation, explained the various research and activities implemented in Mindanao concerning mainly the methods used to form local communities that produce social changes. He proposed strategies to build bridges that fill the gap between the needs of local people and scientific research. 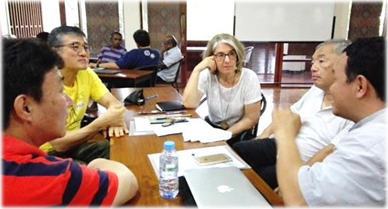 In the fourth part, bringing together all these background elements, we reflected on our mission, divided into regional groups and shared views in a general assembly. All too often, Jesuit social centers are stuck in the charism of the founder or in their established practices.

Christina Kheng, a church management expert who teaches at the East Asian Pastoral Institute said, “Even when we do planning, only a handful of people are usually involved and we forget our staff that will be implementing the program. Another major issue in apostolic planning is how to connect and reconnect the foundational mission of the organization with the nitty-gritty of actions and activities. “Remember, our work is fundamentally a mission of the church. It is not just work or business,” she said.

The 5-day workshop used an interactive method that required participants to read written background materials in advance, and then learn and reflect on case studies individually and in groups. The method proved fruitful.

“I feel confirmed that Ignatian spirituality gives a strong foundation to our social ministries,” said Indonesian Jesuit Fr. Kristiono, who has just finished tertianship and has been appointed director of a community development office in the Jakarta Archdiocese.

Casa Ricci staff Peter Au, who was formerly second in command in the Macau government’s Social Work Department, said, “This is very different from the way the government works, especially in our constant awareness of the mission that informs our day-to-day work.” Fr. Nakai added, “It is important for Jesuits that are involved in a similar mission to gather once a year to learn together, pray, and enjoy some time together.”

Fr. Benny Juliawan from the Indonesian Jesuit Province, who at this workshop ended his task as coordinator of JCAP Jesuit social ministries, said, “It is my hope that this workshop will help address an important gap in our institutions, which are mostly small and rely on lay collaborators.”