Last summer two major news stories were reported concerning death penalty: one turned out to be good, the other bad.

Thirteen Persons hanged = Genocide
The bad news was that all thirteen Aum sect members in death row were hanged last July. Of course, when I imagine the moral and physical wounds that have yet to properly heal for the victims and their families, my heart collapses and the weight of the crime overtakes me with fear. Nevertheless, to bring such a consequence to the criminals of such heinous crimes does not bring any real “healing and hope” to the victims and I personally do not think that it accomplishes true “justice and peace” to society. 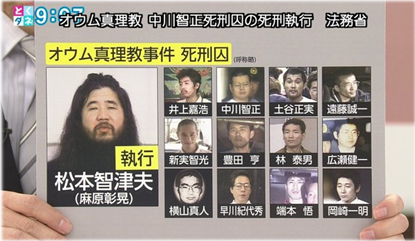 The executions happened twice in July, taking place alongside the natural disasters that produced the deaths of more than 200 people and in particular around the western parts of the country that faced torrential rain. Moreover, the second day of mass execution coincided with the second anniversary of the mass murder and injury at the Tsukui Yamayuri En care home for mentally disabled in Sagamihara. Mourning the precious nineteen lives that were tragically lost in a day where it should be vowed that such deaths should not happen again, I cannot help but feel shocked and angry to the ruthlessness of hanging several people at a time on the same day as that anniversary.

There were many comments praising Justice Minister Kamikawa Yoko for her courage to take the drastic measure of executing the thirteen Aum members. Where did the criticisms go to the fact that she was attending a drinking party the night before the first executions took place? I feel horrified at Japanese society praising such an incident where people were killed. The executions would make one recall of the letter that the young assailant of Sagamihara stabbings wrote to the Liberal Democratic Party in the latter’s wanting to receive “praise” for eliminating the lives of those “who can only produce unhappiness.” Another personal recollection was that of calls a member of society’s “productivity” that originated from the ridiculous remarks of a Diet senator which then set off public discourse and saw all party officers rushing to her defense. We must confront the government that supposedly guarantees and safeguards people’s lives and human rights, in particular that of one’s peaceful survival but instead takes the contradictory lead of depriving the lives of many citizens through these actions.

Revision of the Catholic Catechism
On the other hand, the good news is the revision of Article 2267 in the Catholic Catechism which refers to the death sentence. Previous Popes since Saint John Paul II have expressed the opposition of the Catholic Church to death sentences. The Bishops’ Conference of Japan has accepted the Vatican view and publicly expressed the Catholic opposition to death penalty on a constant basis. The 2001 publication regarding the issue was recently expanded and published under the name of “Reverence for Life: a New Look” where the bishops included a new article on the death penalty and graciously explained the opinions used domestically and internationally, the time is ripe for the abolition of death sentence.

In 2016, Japan Federation of Bar Associations adopted a declaration to target the abolition of death penalty by 2020 and in 2017 UN General Secretary, Antonio Guterres, declared October 10 the “World Day Against the Death Penalty.” He claimed, “I want to make a plea to all States that continue this barbaric practice: Please stop the executions. The death penalty has no place in the 21st century”.

“The death penalty is inadmissible because it is an attack on the inviolability and dignity of the person.” The statement has been included in the Catholic Catechism and, through that, is Church’s position. If there are these that still justify it Pope Francis remarked on October 11, one day after of the UN General Secretary’s appeal where he added, “(death penalty) is per se contrary to the Gospel.” His remarks opposing executions were appeals to revise the Catechism yet this revision does not mean changes in doctrine.

But in conforming with contemporary dynamics and discerning the signs of our times, these are changes in the interpretation of the Church doctrine. Of course I am aware that there is a considerable number of individuals within Japanese society and the Catholic community that still supports the death penalty. Nevertheless, because there are other ways to solve problems without killing people and because there are other methods yet the death penalty is seen as “justice”, then it becomes a declaration of defeat for the human race. But if Christians really believe that “life is precious,” then serious dialogue is needed to look for ways not to end life and to try to build a safe society in peace.

“(The Church) works with determination for its abolition worldwide.” This is aptly revised in the declaration of the Catechism. In a Japan that still supports the death penalty, we as Japanese Catholics should dedicate ourselves to work for the abolition of executions much more than people from other countries do.