Churches in Kure suffered serious damage in the aftermath of the heavy rain that flooded the area on July 6-7, 2018. Some Church members were saved from drowning as they fled from their submerging cars, as was recorded in the magazine “Shinto no Tomo” by the survivor. While there were those who saw their families’ houses damaged by the floods, other homeowners witnessed devastation from the landslides that swept into their backyards. Those who had homes that were damaged by the flooding did not face the sort of serious devastation that occurred with families who had their houses destroyed in the landslides, of which friends of church members were among the victims. The landslides blocked the main roads in Kure which turned the community into an island cut off from the rest of the region, making the delivery of supplies difficult. Residents spent several days in anxiety as water was restricted and the shelves of supermarkets and convenience stores sat empty.

Most Church members could not make it to worship on July 8, the day after the floods and landslides. I have never seen such a small attendance since I first arrived at Kure Church. Since the church was in a district that was not cut off from the water supply, our family spent the first week supporting the church members who sought running water for drinking, bathing, or washing laundry.

Amidst the aftermath we heard the input from Rev. Uchiyama at Immanuel Kure Christ Church, the President of Kure Pastors, who sought to utilize our Heian church towards accommodating volunteers 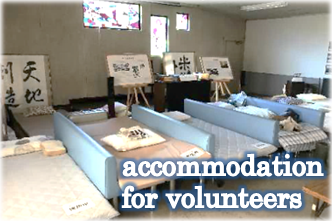 for the impending launch of a Kure volunteer staging area spearheaded by Hiroshima’s Missionary Cooperation Secretariat of Evangelical Churches via the Christian Hiroshima Disaster Relief Center and in conjunction with the Japan International Food for the Hungry and Samaritan’s Purse. Churches in Kure already had healthy relationships especially celebrating together for annual citizen Christmas. Such connections have led to our churches in providing accommodation for volunteers participating in the relief effort. Under the coordination of Immanuel Kure Christ Church, the coalition that included Kure Heian Church of the United Church of Christ in Japan (UCCJ), Kure Revival Center Church, Kure Nazarene Church, and Kure Alliance Church opened their doors for volunteers from July 17 to August 10. We sought to answer the needs of victims who were church members and their families as well as the greater region where the churches are located.

Slowly, roads reopened to traffic and I began to visit church members and seekers who had been unable to visit the church since July 16. Among those I visited included sisters in Yasuura district who were helping repair the landslide damage done to their grandmother’s home where I lent a hand in the repair work and held a simple Christian prayer service with them. As a pastor, I felt that it was my responsibility to do such outreach. It can be said that the missionary pastoral activities started to emerge as if the switch of the pastoral ministry was turned on and because of that, there was a need for the volunteer center of Kure Church to assist that family. I informed the Christian community and the result was that not only did were volunteers accepted but we ourselves participated in the relief activities going on in the district and before we knew it, we became volunteers ourselves in the relief efforts.

At the start we imposed a four week limit in volunteer activities in order to avoid exhausting the resources of the disaster area’s church and its pastor. By August 10 volunteers were no longer accepted for overnight lodging yet we at the Kure ministry committee sought to continue the rest of our commitments to the relief effort. From the mid-August to September 28 we continued recruiting volunteers for Tuesday and Friday workshifts.

Currently the volunteer center of Kure Christian Churches is continuing volunteer efforts at Tenno district where Salvation Army brought in heavy machinery in alongside Samaritan’s Purse and UCCJ as well as a coalition with the Council Social Welfare, reaching out to areas where neither the Council nor the Administration were previously active. Once again the connections between each member along with their friends and relatives helped contribute to the mud clean-up efforts of other districts such as Yasuura, Kawajiri, Hiroryotani and Ondo as well as participating in the reconstruction project of the Akitsu Christian Church. As we wrap up these operations, I pray that with all our contributions to the relief effort that we can place everything in the Lord’s hands. Because once the seed has been sowed, only God will allow it to grow and bear fruit.

Christians and seekers have come from all over the country to participate in the relief effort. Overseas Christians such as those who have done missionary work in foreign countries and members of churches in Hawaii, Texas, Korea and elsewhere came to our assistance. Their presence was a testament of God’s love for this town and its residents, a sign that light had been had shown in our community. With regard to our churches of Kure, it was a symbol that God remembers us. The fact that people worked together in the name of Christ ―regardless of sectarian divisions― is a God’s blessing. From the bottom of my heart, I want to once again share my appreciation to all volunteers and I pray to God that He gives them strength when they face their own trials. 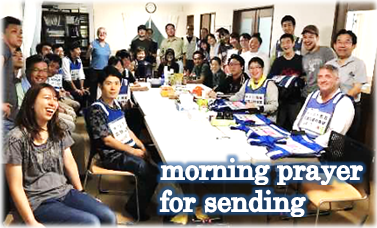 From the start the relief efforts, Evangelical churches played a central role and soon after, Pastor Mitsuya of Kure Yamate Church (UCCJ) and myself joined the relief operations. There were volunteers, funds, and goods coming from Christian-related organizations, donations from the Korean Christian Church in Japan, as well as personnel from the Catholic Church who joined us. Such ecumenical activity towards assisting in the aftermath of heavy rain had never happened before. When the volunteers left early morning, they sang “Any Time” together and after a common prayer, they all dispersed to separate places in need of assistance. At night they sang the same song again and a prayer followed after a five minutes message. At Kure Heian Church there were often prayers held with the volunteers staying overnight. Every day they showed respect and gratitude for their own place of work and paid homage and gratitude to God for using them to do his work. I think that the volunteers performed their activities by praising and praying to Him.

I visited a small workshop in Yasuura district where we send a gift of citizen Christmas event. The landslide rushed into a community already worn down by the flood. Initially it seemed that there was no problem with the flooring but we had to report that the landslide had probably flooded the underfloor. The face of the person in charge was that of grief. With the thoughts that welled inside me I told him “I am a Protestant Minister but I cannot be of any help to you. May I pray to God to protect you?” He answered, “Please do so” and I prayed for him earnestly. I also prayed for those working at the workshop, for the reconstruction of the place, for the struggles that the person in charge faced so that God provides him with light and hope. After the prayer I looked at the face of the person in charge, with a reply of “thank you very much” as tears shed down his face. I thought about how happy would he feel from realizing that God was pouring light into his heart and giving him a glimmer of hope. I was blessed to pray with others during this experience. This made me reflect that this was only provided to me due to my role as a pastor.

On 22 September I performed the blessing of a Christian family’s home that benefited from our volunteer work. The carpenters will start repairs in October and we prayed together to God for safe construction and asked God’s blessings for the family’s new life. Following the Psalm 46 and the letter of Paul to the Corinthians (1 Cor. 10:13) we praised loving God at all times. The face of the house’s owner had drastically shifted into smiles compared to our first meeting in the aftermath of the disaster. One could feel the love of God in there. Of course it would have been better for the disaster to not occur, but I nonetheless gave thanks because this experience could be also seen as a blessing from God.

（1） No matter what could happen, never
be defeated by suffering, never give up
believe that Jesus loves you, believe it

（2） No matter what could happen, always
desire happiness, don’t give up
Jesus loves you, yes He loves you

About 3 months have passed since the disaster brought by heavy rain. During that time the JR was not running and a young woman who couldn’t commute from her home to the place of work was living with us for a while but she already left. My wife prepared dinner for her and she prayed with us at dinner. It was also a special blessing experience from the Lord and that already has ended. I felt that many had prayed for us. Various people left thanking us for all the valuable services done to the victims of the disaster. Frankly speaking, 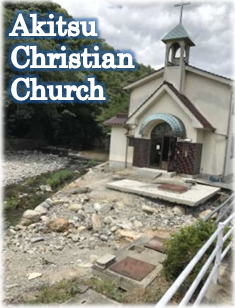 I felt that those 3 months had been spent doing pastoral ministry as a Protestant minister, together with my family. I will be blessed if, remembering the experiences people could continue assisting me. The situation around the Kure area is almost stable, but other areas where the disasters were heavy are still in serious condition. Please, continue praying.

Christian Hiroshima Disaster Relief Center, fulfilling its responsibility for the rebuilding of the chapel of Akitsu Christian Church, has in mind to visit the temporary housing and assist with psychological people’s care and conduct charity concerts. I want to show my gratitude again for your accompaniment and the Lord’s love expressed to us. I pray to the Lord to give you peace and abundant blessings.   in the Lord.