Dilemma of the Youth Synod ～Report of the Pre-Synodal Meeting～ 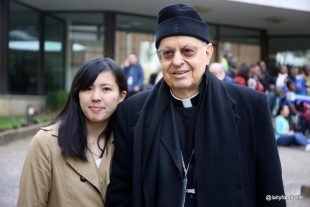 I participated in the pre-youth meeting for the Synod. The purpose of this meeting was to prepare for the Synod which will be held in October 2018. The theme of the Synod is “Young People, the Faith and Vocational Discernment”. This meeting was held from last March 19 to the 25. I was sent by the Japanese Catholic Bishops Conference. Pope Francis was convening about 300 young people from all over the world and we prepared the Document that will be used in the next Synod.

The participants were not only Catholics, but also Buddhists, atheists, Sikhists, Christians and Muslims. The young were divided into 20 groups by languages (English, Spanish, Italy and French) and held group discussions. At the same time, 15,000 young people also participated by using Facebook. There were 6 independent groups using 6 different languages (English, Spanish, Italian, French, Portuguese and German). Besides those 26 more groups using the Facebook participated in the group discussions sharing the same 15 topics. The final document to be presented to the Synod was corrected 3 times by the assembly.

The topics were divided into 3 sections.

Thirdly, we discussed together about Formation in the Church for Pastoral Work. Concrete topics were the Attitude of the Church, Young Leaders, and Preferred Places.

I could heard there precious opinions about our own actual situations and pastoral action. 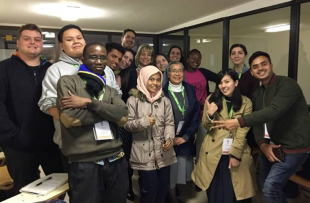 I would like to refer to you 2 points concerning the dilemma of the final report of this meeting. One of them is that the general contents do not suit individual context situations. One is because young people who leave the Church were not present to make this document.

Thus the first dilemma is that this meeting’s final report has been produced together by all participants who came from all over the world. The document is useful for a general and universal understanding of the realities young people are facing now. But in fact, it depends on the person, the community, parish, diocese and country. I really hope this written document does not cause misunderstanding about the situation of young people.

The second dilemma refers to the structure of the Synod itself. We can plan Formative and Pastoral Activity programs for the young people who leave the Church in the future after the Synod, but it seems too difficult to listen to the actual voices of young people who have already left the Church.

This meeting gave us a great opportunity to understand more the issues young people face now in our Church. We usually feel that our church is just the parish or Diocese but, we must also think at the general level of the universal Church and include that as a world vision of the parish. I feel that the issue of discussing the problems of young people during the coming Synod has been a big blessing.

In this meeting the enthusiasm about the church from friends who came to participate in the meeting from all over the world encouraged me. I also got the opportunity to share my challenges in my life in Japan. They are such like the atmosphere of religious intolerance with regard to our Christian associations.

When I was in Junior high school, I was baptized. I’m the only baptized person in my family. My parents were not against it but I could not go to a Catholic school. So I did not tell my friends that I am Christian. I can tell my close friend that I was baptized. But to not so much close friends I hided that to them. At that time, I felt it is a common thing to hide my faith.

When I was a high school student, I decided to go to Sophia University to study Theology. To prepare the entrance University examination, I was reading and studying about the Bible in high school. At that time my classmates laughed at me. Within such an atmosphere it was natural for me to hide my faith in public. And also our religious association members do hide their faith like that. They cannot speak to others about their own faith.

At this meeting I started to reflect that it is a problem of identity. It is a gap between one’s Christian faith’s identity and the social milieu. On the other hand, a participant from West Asia mentioned that she feels her own faith as her identity. The reason for that might be the social environment.

Through my contacts with the Jesuit Social Center, I could meet with Bishop Katsuya who is Bishop of Sapporo diocese and will participate in the Synod to be held in October, 2018. He kindly heard my experiences at the pre-synod youth meeting. That includes the way how the final document was produced and the main challenging issues discussed during the meeting.

The final document was made by young people gathered from around the world expressing what they thought and the realities they face. Because of that, this document has an important role in the pastoral care of young people and accordingly it seems to be an important document for the Synod on Youth. And since this document is so important I am planning to translate it into Japanese.

Now I just finished the first version. I must also check with other document similar expressions and also to reconsider to use clearer Japanese sentences. When I reported to Bp. Katsuya, we talked about this translation project. Bp. Katsuya positively agreed with this project. I might finish the translation before October when the Synod will be held. Please pray for the fast completion of the project.

Thank you for the opportunity you gave me to report like this. I thought this topic must have to work with all people of God.