On June 9-10 a national convention of NGO groups organized by the migrant network SMJ took place in Hokkaido. The title of the Conference was “Campaign for Rights of Migrants 2020 – Koko ni iru. I am here; we are here.” Over 150 delegates from all over Japan participated in the Conference workshops. Our Jesuit Social Center was also represented by 3 of our staff.

Japan has officially launched a national plan to prepare for the 2020 Tokyo Olympic and Paralympic Games with the motto “Unity in Diversity.” This was selected by the organizing committee, having in mind the need to accept and respect the great variety existing in the world.

But the SMJ Network thinks that such a concept should not remain a mere slogan. The Network aims at a society, institutions, and policies where the rights and dignity of migrants and people with diverse roots are guaranteed. Thus, the theme of the Hokkaido Convention: “Koko ni iru. I am here; we are here” stressed the existence of migrants among us.

In contrast to the lack of official policy for migrants, the SMJ Network is working toward designing a citizens’ policy for migrants in Japan. The general workshop was guided by a group of specialists, lawyers, labor unions leaders, politicians, and university professors. The participants, professionals of numerous NGOs, were divided into 8 different committees covering most issues concerning migrant workers. There was a heavy stress on foreign trainee workers. The 3-member delegation of our Social Center joined 3 different committees: immigration policy, racial discrimination, and trainees. I attended the technical trainees group, which happened to be the most crowded, with over 40 members. 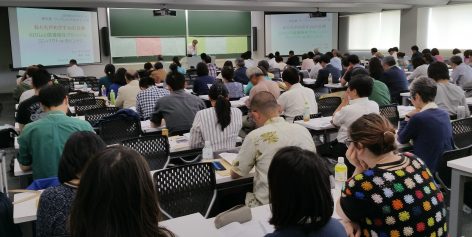 The contents of the discussions at the convention were very enriching, but difficult to summarize in a short report like this. Nevertheless, to put it simply, 3 important main issues surfaced in the discussions.

The number one major issue refers to the “official training system” for migrants, which should be radically reformed, or rather suspended. In fact, the present system aims at recruiting foreign workers for cheap restricted and temporary labor.

The basic issue affecting the life and conditions of migrant workers in Japan is the lack of an “immigration policy.” Politicians have categorically denied the possibility of these foreign workers becoming long-term migrants. “They are invited to work on a temporary basis in Japan to alleviate the pressure arising from acute labor shortages,” Prime Minister Shinzo Abe insisted in a Diet session.

The government organizes high-level committees to deal with the complicated issues of foreign labor, but at the end everything comes into the hands of the Immigration Bureau, which controls all foreigners. Workers have practically no rights, and if they complain to the companies where they work, their visas are endangered. They have to remain faithful to the companies they work for, because all complaints endanger their stay in the country. Immigration = control of foreigners.

Finally, the core situation that sums up all factors regarding immigration is that Japan badly needs workers in order to survive and remain at its high level as an industrial country. The most recent data shows that the Japanese economy employs 1.27 million foreigners, almost doubling since 2012. Given that only 2.5 million Japanese have joined the labor force over the last five years, it means that one out of every four new workers during this period has been foreign-born. Japan needs simple unskilled workers, although it does not officially accept them, but at the same time it has officially established a system that aims at technical training for young foreign workers to provide them with skills needed in their own countries.

A professor of the Hokkai-Gakuen University Faculty of Economics spoke about the contribution of foreign workers to rural companies in Hokkaido. In his Power Point presentation there were photos of almost 20 young Vietnamese girls milking cows using top-grade technical mechanisms. I know from experience that Vietnam is a country not accustomed to drinking milk and does not have cow farms. The Vietnamese workers are supporting the milk industry in Hokkaido and get paid for that, but it is ironic to think that the skills they obtain there will be of no use back home in their rural areas.

Evaluation of the National Migrants Convention
It was certainly inspiring and hopeful to realize that many citizens’ organizations with young people are dedicated to fight for the rights of foreign workers in Japan. On the other hand, the rapid influx of young Vietnamese workers into Japan was greatly noticed during the workshops.

My overall personal impression was that the input by experts enjoyed a high level of appreciation. The active participation of many delegates provided fresh approaches to issues concerning migrants in Japan so as to form possible migrant policies and press the government to make immigration legislation more truly human.

But, after all, some basic questionable elements were missing. To my mind, one of these was the lack of an “Asian vision.” All discussions were heavily centered on Japan. Certainly, Japan is “hungry” for young foreign workers. Poverty, especially in rural regions of Asian countries, and their lack of freedoms were not in view, although most foreign workers come from these countries. These countries, as well as the influence of globalization, were missing.

On the other hand, the basis of migrants’ rights is recognized in the UN Declarations and Japan’s Constitution, but stops there. My impression was that there were many Christians among the delegates but religion was not even mentioned. The contribution many churches make for migrants remained unnoticed.

Nevertheless, the Network, at the national level, is becoming stronger and there is hope that the situation of foreign workers and trainees will improve. 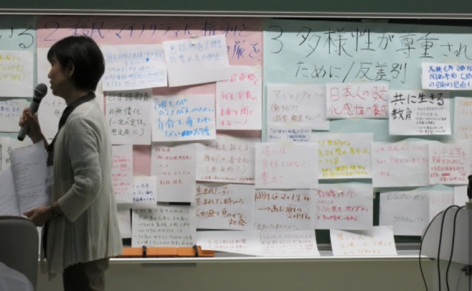