Sharing the Experiences of Migrant Workers in Asian Countries

A group of Jesuit delegates from 9 countries and regions of East Asia gathered in Manila from April 17 to 21, 2018, to review and prepare programs with migrant workers in East Asia. We belong to a Jesuit network organized in this region as a result of the decision taken in 2010 by the Jesuit Conference of Asia Pacific to select migration as a common priority for social action. The network started in June 2014, but some of our local institutions have been active for many years already in our own countries.

Communication and governance structures have been established during these few years, thanks to annual meetings and the adoption of Skype, Google Drive, and group mail. In spite of the fact that most of us are small and very limited in resources, the shared concern for migrant workers has become the center of fruitful collaboration. For the last 3 years, the network has organized common research on issues of left-behind children of migrants, resettlement, and brokerage, which have been issued as booklets in English.

In our last annual meeting, besides the normal updates from each member institution of the network, we had productive input from the Vatican Dicastery for Promoting Integral Human Development (created January 1, 2017), the Leadership Training Ateneo program to empower Filipinos in the diaspora, and even a session to face stress.

The aim of the migration network is to promote and defend the human rights of vulnerable migrant workers, to confront the structural causes of migration and displacement, and to raise social awareness in order to promote social change.

But, besides awareness programs in collaboration with other organizations and social groups, advocacy planning is increasingly unavoidable in order to attempt better protection for migrants both in sending and receiving countries. A characteristic in East Asia is the fact that we are in a crisscross region sending out migrants as well as receiving them.

Marawi: Witnessing the enforced displacement of a whole Muslim community
In May 2017, heavy fighting erupted in Marawi, a large Muslim city in Mindanao. The siege continued even after the fighting ceased in October last year. Many people were killed during the 5-month fighting. Buildings, including a central Mosque and the Catholic Cathedral, were destroyed. Thousands of citizens became displaced from their homes and left without taking any belongings.

Our program included visits to displaced Muslim camps around the region. Half a year had passed since the military siege ended but military controls were spread all over. Martial law was imposed there. 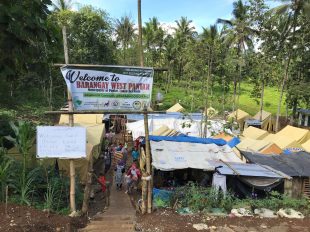 We all received strict “Marawi Visit Guidelines.” Permission was given only to those on an official visit of participants riding with an assigned leader and in an assigned vehicle, without any permit to transfer vehicles. The route was strictly fixed, and gadgets like mobile phones, cameras, and tablets were greatly restricted. Religious and cultural sensitivities were to be followed in meeting with people.

We stayed for more than an hour in one camp made of tents for more than 900 people. All were Muslims and received us very warmly. They had lost everything. There was nothing in their tents, no food, not even water. The children were playing around with some volunteers. 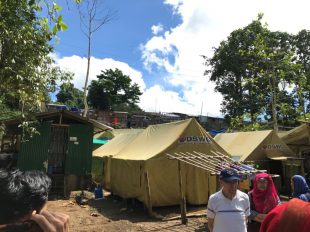 Their leaders invited us to a free space where the people gather for meetings and prayers and little by little over 150 persons came to greet us and talk about their present situation. Listening to them, I spontaneously thought about the big earthquake in the Tohoku area and the Fukushima nuclear plant meltdown. So I mentioned that also in Japan people suffer forced displacement. “You are not the only ones,” I mentioned. Building up solidarity with other people seemed to give them some encouragement.

In fact, their situation seemed to be beyond hope. 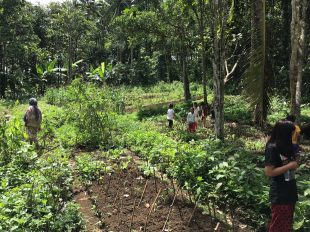 We learned that many partners from the public and private sectors have responded very generously to assist all displaced Muslim communities. They provide needed food and clothing, and land for establishing tent camps. I was especially moved by the initiatives of Cagayan de Oro Xavier University coordinating material assistance on its own campus in order to distribute these to displaced Muslims. The University’s Department of Agriculture of the University, through Searsolin, promotes gardening around the camps to produce vegetables needed for the people there. They help them to do the gardening themselves and provide the seeds. They also send groups of young volunteers. 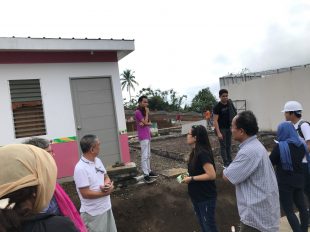 Xavier University is also the project manager to build 60 houses of 24 square meters in the Angat Buhay Resettlement Village for displaced Muslim families. While we were there, we visited the first one, which had just been built. When this bulletin reaches our readers, 60 families will be able to occupy them. The motto of Jesuit Xavier University is “We are not just building houses, we are building community.”