Peace Learning through Experience of Journey to Seoul

I joined a journey to Seoul that was the first program of a project for Peace and Reconciliation throughout East Asia from Feb 23 to Feb 26, 2018.

Japan has had very sad historical experiences with Korea, but these are not referred enough to in Japanese education.

In this journey to Korea, we were given opportunities to study that history, to feel sympathy with Korean feelings and to talk about Peace with Korean Catholic youth. We went to Mongdang Yonpil [stubby pencil] Café (to support Korean schools in Japan), the War & Women’s Human Rights Museum, the Independence Hall of Korea and Seodaemun Prison History Hall.

Next, we visited the War & Women’s Human Rights Museum and saw some exhibits about women who had been victims of gender-related violence. These exhibits depicted not only Koreans but also Vietnamese and South Africans.

Actually, I had thought that the truth about the issue of “comfort women” was unclear. But by seeing those exhibits with all the evidence provided, I realized that the Japanese Army was actually involved in such war crimes systematically. Seeing the exhibits of the crime victims, I felt internal suffering for being Japanese, as if such things had been done on me or on my family. 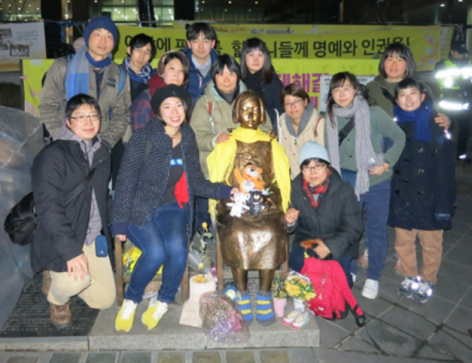 In any war, women are victims of gender-related violence and this is still happening. I have figured out that the victim’s hope is that such gender-related violence will never happen again. I also saw a sculpture of a girl representing a Statue of Peace. I was inspired by the actions of these women to make sure that others don’t experience such suffering.

On the second day, we went to the Independence Hall of Korea. There were many pavilions and monuments on a huge site. These made me understand that the history of independence from Japan is more important for Koreans than the Japanese realize. Seeing these activities of activists in the independence movement, I noticed that there is a clear difference between Korea and Japan concerning education in history. I also came to realize the seriousness of the oppression the Koreans had to suffer by being deprived by a foreign power not only of their own country but also of their own history and culture. 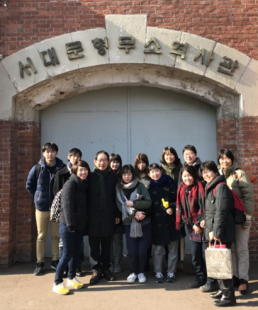 On the third day, we visited the Seodaemun Prison History Hall, which the Japanese army built before they colonized Korea. After Japan’s defeat, the prison was used by Korean dictators till it was closed in 1987. Now it has become a museum. We had the experience of hearing an account from a person who had been imprisoned there from 1983 to 1987 (He was found not guilty). He told us about the tortures in that prison. I could observe the sad history of Koreans tortured by Korean people in the same way as they had been by Japanese.

Later, we met about 25 Korean youth in the Ignatius Café of the Jesuit Center. We heard a talk from Fr. Nakai and shared each other’s feelings regarding Peace. 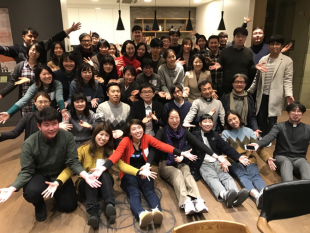 In our Japanese group, there were some members who worried about talking with Korean youths, and also, as well, some Korean members had bad images of Japan. Nevertheless, they heard what we had to say, understood us, and encouraged us heartily. It truly touched us deeply. I felt the great power of the Holy Spirit in each member. After the sharing, we continued talking at a party that they had organized for us. We made wonderful new friends.

During those three days, I was shocked to realize that there are many difficult things still unknown in Japan, such as events of the Korean colonial history from 1910 to 1945, the problem of “sex slaves”, Korean ignorance of Japanese discrimination toward Korean schools, which can be seen as Japanese problems, and so on.

We embraced various feelings and shared common sympathy with these problems.

At the end, the most wonderful thing in this journey was the warm welcome given to us by the Korean Catholic youth on the third day. We were able to share with them the same feelings for Peace with the same religious beliefs, to know each other and join in the Mass together.

Now I have come back home and have shared these experiences and feelings with some friends. I discovered that people other than Korean and Japanese are also interested in these problems and have some knowledge about them. I felt shame again that I didn’t know about these problems before this journey. I have also talked with Japanese friends about such problems, too, but I felt sad about not having been able to share such feelings, for instance about political topics, after the journey.

Kind messages from my new friends encourage me and I strongly feel that I want to tell others the things I have learned this time, I want also to share more with others peace issues. We have to strengthen our solidarity and try to disseminate this experience in our own situations. 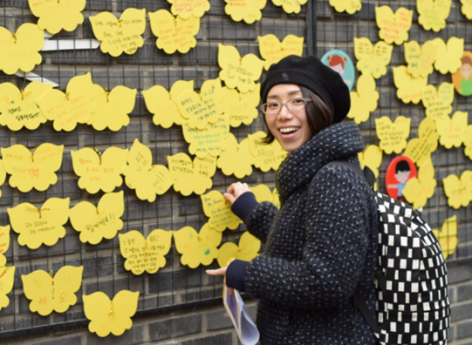 I really hope this journey will become a first step toward Peace, and that it will continue to promote and strengthen Catholic relationships between Korea and Japan.

Finally, I am grateful to the Lord for everything, to Fr. Nakai and all the priests and sisters and also to all the youth we met during this journey.

Please, pray for us so that we could be able to follow the guidance of the Lord.