History of the Social and Pastoral Bulletin

The Social and Pastoral Bulletin was first launched on 15 May 1984. Publication has continued for 34 years, reaching its 200th edition now with this issue. The staff members of our Social Center send best wishes to our readers for their long support of this publication. 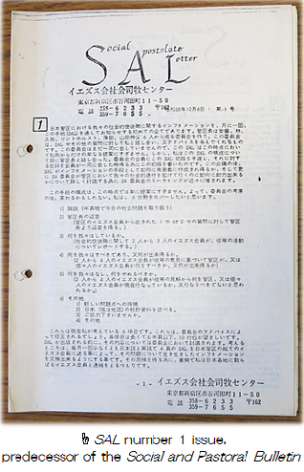 In fact, the Social and Pastoral Bulletin had as its predecessor the Social Apostolate Letter (SAL), which was first published on 6 December 1980 under the initiative of Fr. B. Weghaus. That was about 4 months before the Jesuit Social Center was established at its former Tokyo address—Kawada- cho in Shinjuku-ku. As the name indicates, it was a letter addressed to Jesuits in an effort to promote exchange of information among members of the Japan Province and those Jesuits working for the social apostolate. The Letter was published once a month. 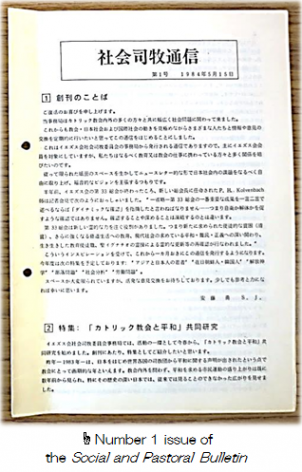 SAL was rather heavily oriented toward theological reflection on local and world social issues from the standpoint of Catholic social doctrine, while the Social and Pastoral Bulletin placed its emphasis, since the 1990’s, on reporting about grass-root Catholic and secular social movements. The reaction of readers to such news from various sites provided live platforms for reflection, and the articles enjoyed great popularity. 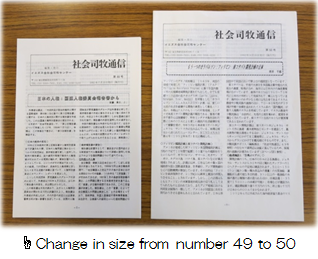 One main characteristic of the Bulletin as well as of SAL was that both were published in Japanese and in English. This was not only because Jesuits in Japan come from many different countries (at present over 20 nationalities are represented), but also because the role of the publication is to offer people in other countries a broad spectrum of information concerning the situation of the Church and Japanese society. 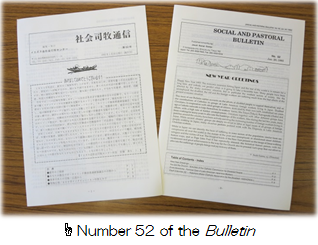 The SAL publication had the Japanese edition on odd-numbered pages and the English on even-numbered ones, all in the same issue. On the other hand, the first issues of the Bulletin had the form of a booklet, in which the first half was in Japanese and the latter half in English. With the 52nd issue (January 1993), the Bulletin began to be published in two separate editions, Japanese and English. 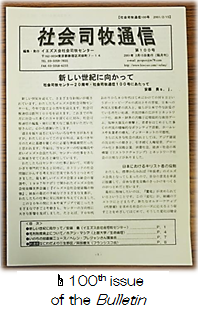 After the opening of the Social Center’s official homepage, part of the Bulletin issues have been included there. Actually, all back numbers, starting from the 82nd issue (February 1998) can be found there. We are trying to upload other older back numbers onto the same HP. 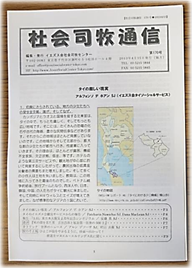 Again, naturally, the first issues of the Bulletin were printed in black and white, but once the Social Center acquired a lithograph machine, we started publishing the Bulletin in color beginning from the 170th issue (April 2013).

We do not have a record of how many issues were printed in previous years, but at present we print about 400 issues in Japanese and about 250 in English. In spite of the rising cost of printing and posting, we have continued to maintain the same yearly subscription rate of ￥1,200. We still print the Bulletin ourselves, as was done from the beginning, and will continue our effort to offer our readers pages rich in content and easy to read. We would greatly appreciate your impressions and comments. We hope that you will continue your interest in reading our Bulletin.