No One Excluded from Society

Refugees’ Exclusive Society and Hate Speech
The Catholic Commission of Japan for Migrants, Refugees and People on the Move (J-CaRM) organized a national workshop in Osaka City 23-25 November 2017. The theme of the workshop was “Meeting the People of Our World ~No One Excluded Campaign~.” About 150 people from all over the world living in Japan attended the assembly.

First, on day one, Ms. Komai Chie, a lawyer who is actively working for the protection of foreigners’ human rights, gave the keynote speech entitled “To Live with Refugees and Migrants: Future of Japanese Society.” The story of how cold an attitude Japanese society continues to take toward refugees and refugee applicants is sad and embarrassing, no matter how many times we hear about it. However, the attitude of Attorney Komai, full of enthusiasm and love, but also rage, without forgetting humor in her manner of speaking, conveyed some extent of hope.

After the opening speech, the assembly was divided into four sessions. With regard to the relationship between Japanese churches and foreigners, there were sessions such as the “No One Excluded Campaign” jointly initiated by J-CaRM and Caritas Japan. I participated in the fourth session: “Against Xenophobia.” The lecturer was Ms. Lee Shin-hae. Her father was a first-generation Korean in Japan and her mother second-generation. Ms. Lee, who introduced herself as a “second-and-a-half” generation Korean, explained that she has been an object of hate speech for having participated in a demonstration against hate speech and discriminatory messages on the Internet. She said that whenever she shows the video she was about to show us, it is so painful for her to watch that she would usually absent herself. The video showed such vulgar and discriminatory acts of hate that the people watching it needed to cover their eyes. Although the words of hate were not directly aimed at me, tears of fear and sadness came spontaneously to my eyes. How much pain had she to suffer as a result of such attacks aimed directly at her over a long period of time?

Walking through Ikuno Korea Town
The morning of the second day we went on a fieldwork. We gathered at JR Tsuruhashi Station and headed towards Ikuno’s Korea Town. Mr. Kim Kwang-min, Secretary General of the Korea NGO Center, guided us. Walking through the area from Tsuruhashi Station, we could see over 130 Korean restaurants and food supply shops along the way. While Japanese shopping arcades are closing down nowadays in Japan, the Ikuno Korea Town is said to be the largest Korea town in Japan, where customers and tourists gather and provide a surprisingly lively atmosphere.

There was other group walking to learn the history of a Korea Town, but since our main purpose was to observe the situation of ethnic education, we visited the Korean School and an Osaka City primary school. During the morning we went to the Osaka Korean Fourth Elementary School, founded 70 years ago. There, about 100 third and fourth-generation Korean students study mathematics, drawing, manual arts, and the national Korean language etc.. We observed the eagerness of the students along with the careful considerateness of the teachers.

Legally speaking, Korean schools fall under article 134 of the School Education Act and are considered “Miscellaneous Schools.” In other words, they are not ordinary schools and have been subsidized not by the national government but by local governments. Nevertheless, Osaka Prefecture has halted subsidies to the Korean schools. Because Classes follow the curriculum guidelines of the Ministry of Education, Culture, Sports, Science and Technology, they are very close to the Japanese public school system. Nevertheless, the treatment of Korean schools is totally different from other International schools. This is considered unjust and discriminatory and has often been criticized at the international level. The intentional effort to remove these schools from conducting high school education free of charge has provoked public trials in various places.

The primary school we visited in the afternoon is a public school of Osaka City, which conducts ethnic classes in Korean culture and language for children of Korean roots, in spite of being a public school. Osaka City has set up ethnic education classes in one school out of 4 or 5 different schools in its territory, except in the Ikuno area, where ethnic education takes place in almost all primary and middle schools. At the time of our visit they were practicing traditional artistic plays, dancing, and musical performances.

Differently from Korean schools, ethnic classes held just once a week are not sufficient to master the language and culture, but according to Mr. Kim Kwang-min’s experience, “The learning of language and culture are only a means. What is more important is to be able to become positively proud of one’s original descent. Identity is not spontaneously formed. It is rather built through human relations. The social identity of minority groups is related to the existence of the majority and the contacts they mutually hold.” He says that, when he was a child, he gave up because of poverty and discrimination, and could not embrace any hope or dreams for his future. Nevertheless, after discovering the ethnic classes, little by little he learned about his roots and found occasions to re-assure himself. 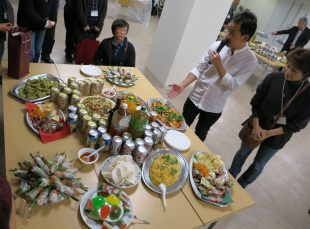 On the evening of the second day, there was a reception where we enjoyed a delicious Vietnamese meal and joined in songs of various countries. The party was graced by the presence of Bishop Matsuura of Nagoya, Chairman of J-CaRM, together with Archbishop Maeda Manyo of Osaka, the venue of the general assembly.

Night Patrol around Kamagasaki
During the workshop I stayed at “Tabiji no Sato,” a Jesuit institution for the homeless located in Kamagasaki (in the Nishinari area of Osaka). This site is the base, every Thursday, for a group called “Thursday Night Patrol,” which looks for homeless people on the streets and provides them with blankets and “kairo” (pocket warmers). About two years had passed since I previously participated in the patrol in 2015. It was an extremely cold night.

In a period of just two years the face of the town has greatly changed. On its surface the town looks beautiful, but it is completely surrounded with fences, which aim at driving people away from the apartments where people live or pass the night. The flophouse district has been remodeled with elegant but cheap hotels to accommodate foreign tourists. Since Christmas was near, the Christmas trees and illumination shone brightly in front of hotels and dining places, but as soon as one walked past them, the whole town became totally dark. I could not help recalling the stable where the infant Jesus was born.

Winter Struggle in Sanya and Shibuya
The severe winter is a very hard season for the homeless living on the street. At the end of the year many companies where daily workers are employed close down and this poses a crisis of survival. During that season welfare services also become less frequent, and a winter campaign is launched everywhere under the motto “Let’s avoid a single death from hunger or freezing.” Starting from Kamagasaki in Osaka and Sanya in Tokyo, the campaign has spread all around. At year-end I went to Sanya and Shibuya.

On the occasion of the Extraordinary “Jubilee of Mercy,” Pope Francis decided to establish the “World Day of the Poor” on the 33rd Sunday in Ordinary Time. His motive was expressed in a message issued on 19 November 2017, the first time for that commemoration. There he stressed the need for meeting the poor in daily life and sharing their life and not only to participate in volunteer activities once a week to comfort one’s conscience with the thought that an occasional good deed is sufficient. By preparing meals together and eating with them in a friendly manner, one can feel the realities of social exclusion.

Multicultural Society in Shin-Okubo (Tokyo)
At the end of January I participated in the program of the Center for Minority Issues and Mission and walked through the streets of Shin-Okubo with Pastor Kim Shin-ya, co-director of the Center. Mr. Kim Boong-ang, chief of the Korea NGO Center Tokyo office, took care of us. Actually over 12% of the residents of Shinjuku Ward are foreigners and in Okubo and Hyakunincho towns there are areas where nearly 50% of the residents are of foreign origin. Counting the fact that there are also many naturalized Japanese living there, the number of “foreign” citizens might surpass half the population.

Walking through the streets I recalled my old times in the university as a graduate student, when a Korean priest older than myself would bring me there to eat delicious Korean food. This area became the site of hate-shouting demonstrations in 2012~13, at the time when the Korean boom was in decline. Going back again to those towns made me wonder how to build a multicultural society where people can live in harmony, and neither foreigners nor poor people are excluded.