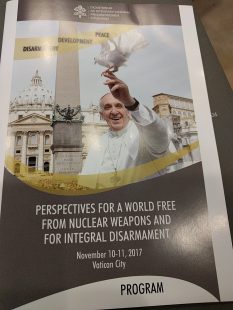 Last year was a big step forward for the movement of A-bomb survivors. In July, the United Nations passed the Treaty on the Prohibition of Nuclear Weapons, and in October, ICAN (International Campaign to Abolish Nuclear Weapons) was awarded the Nobel Peace Prize. Moreover, an international symposium entitled “Prospects for a World Free of Nuclear Weapons and for Integral Disarmament” was chaired by the Vatican’s Holy See “Dicastery for Promoting Integral Human Development” on November 10 and 11. I am Hibakusha, and I was invited to join as a representative from the Japan Confederation of A- and H-Bomb Sufferers Organizations (NIHON HIDANKYO).

This is the first conference on disarmament organized by the Holy See. In the background lies the world’s tense situation in which both the adoption of the Treaty on the Prohibition of Nuclear Weapons and the possibility of using nuclear weapons are being examined. The concepts of “peace” and “development” were the main theme of this conference. These concepts are the foundation of Christianity. The term “disarmament” was also included. It was stated as follows: Indeed, authentic and lasting peace is inconceivable without the development of every person and of all peoples. Nor is a reduction of armaments conceivable if we do not first eliminate violence at its roots, that is, without humankind first being determined to seek peace, good and justice. Like all forms of evil, war originates in the human heart (cf. Mt 15:19; Mk 7:20-23). In this sense disarmament does not only refer to State armaments but involves every person who is called to disarm his own heart and be a peacemaker everywhere.

About 300 participants including cardinals and priests, pastors, religious leaders, representatives from civil society, representatives from governments and international organizations, prominent scholars, Nobel Peace Prize winners, students and other parties joined. I would like to mention a few names of those who had a great social influence in each session – Ms. Jody Williams of International Campaign to Ban Landmines (ICBL), Ms. Mairead Corrigan Maguire who contributed to peaceful resolution of the Northern Ireland problem, Mr. Muhammad Yunus (Grameen Bank) from the bank he founded for the poor, Ms. Izumi Nakamitsu who is UN Under-Secretary-General and High Representative for Disarmament Affairs, Mr. Mohamed El Baradei of IAEA, and Ms. Rose Gottemoeller from the NATO.

I gave a speech in the session titled “Humanitarian ending of nuclear weapons and the path to future peace”, I spoke about the survivors’ past activities, testimony heard from my mother and I made an appeal to abolish nuclear weapons. My speech received an empathetic applause. 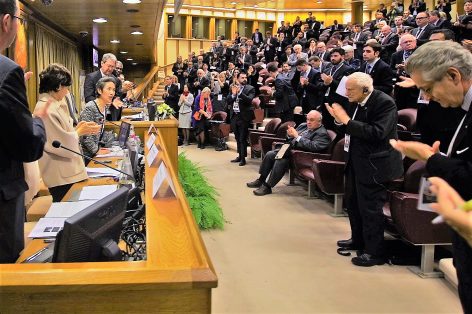 On November 10, the Pope gave a special speech to the participants. “Nor can we fail to be genuinely concerned by the catastrophic humanitarian and environmental effects of any employment of nuclear devices. If we also take into account the risk of an accidental detonation as a result of error of any kind, the threat of their use, as well as their very possession, is to be firmly condemned. For they exist in the service of a mentality of fear that affects not only the parties in conflict but the entire human race. ”

These words were powerful. It was the idea that the A-bomb survivors pushed forwarded for many years as a part of their movement. And the Pope added that “Essential in this regard is the witness given by the Hibakusha, the survivors of the bombing of Hiroshima and Nagasaki, together with other victims of nuclear arms testing. May their prophetic voice serve as a warning, above all for coming generations! ” 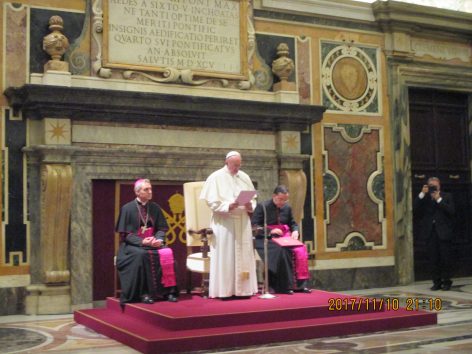 After the speech, all the participants were given opportunity to attend a special papal audience. The signing of the “Nuclear Weapons Ban Treaty” adopted in July was released on 20th September, the State of Vatican City is one of the countries that signed and ratified the treaty on the first day. I paid respects by stating that as a survivor of Nagasaki, I expressed my gratitude to His Holiness Pope Francis for signing and ratifying the Nuclear Weapon Ban Treaty, and I had His Holiness to sign the list titled “International Signature Campaign in Support of the Appeal of the Hibakusya”. I handed the Orizuru (folded paper crane) and the Italian signature document to be signed. I have not yet received the signature, but I am certain that it will come. During my visit, I have received the signature of the cardinals serving as the Vatican’s top executive and the people who received the Nobel Peace Prize. 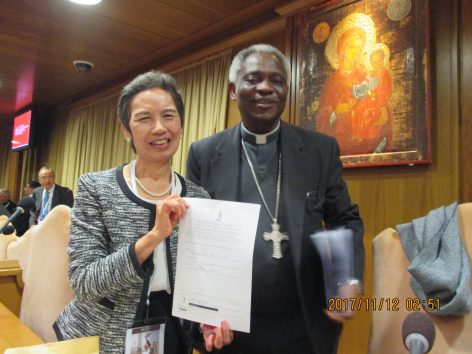 I got media coverage from about 15 companies in Japan and overseas. The Vatican state-run media broadcasted Catholic programs every Sunday morning for two hours. I was impressed with the interview with the backdrop of the Basilica under the blue sky at the rooftop of my hotel. There was coverage by Associated Press, Al Jazeera, etc., although I didn’t have sufficient time to answer all questions, I just wanted to share my intention and activities for abolishing nuclear weapons with as many people as possible.

On November 11, the words that “everything is connected” were repeatedly heard at the Preliminary conclusions at the end of the conference, and the links between a number of global matters were demonstrated. This is the true message that the Pope Francis wrote in a poem in the past, and this message was mentioned in the speech.

“Indeed, the escalation of the arms race continues unabated and the price of modernizing and developing weaponry, not only nuclear weapons, represents a considerable expense for nations. As a result, the real priorities facing our human family, such as the fight against poverty, the promotion of peace, the undertaking of educational, ecological and healthcare projects, and the development of human rights, are relegated to second place. ” (cf. “Message to the Conference on the Humanitarian Impact of Nuclear Weapons” December 7, 2014)

The matters we must prioritize in our lives are all related. We can say that much “human development” has fallen behind in the priority compared to the amount of money, labor and time spent on the development of inhumane weapons. To that end, the importance of the opinion that “everyone being connected” and comprehensive dialogue must be highlighted.

The concluding remarks are as follows. “Dialogue is essential. This dialogue must be inclusive, engaging both nuclear States and non-nuclear States, and involving civil society, international organizations, governments and religious communities. In particular, the Catholic Church is committed to advance this dialogue at all levels.

Everything is connected; and everyone is connected. Together we can rid the world of nuclear weapons, invest in integral human development, and build peace. These preliminary conclusions do not represent the end of the conversation, but rather the beginning of future dialogue and action. ” These conclusions are disseminated by the Vatican at international conferences, including at the United Nations Conference and other international conferences, and I believe the Vatican will strongly lead the World toward the new nuclear-free reality.

The international conference began with prayer and ended in prayer. I was invited to join the prayer on November 11. I prayed for peace in the world, and my heart is filled with warmth thanks to the prayer. Being an atomic bomb victim and a Christian represents the two sides of the same coin to me. That is my identity. The words of His Holiness Pope Francis’s Twitter “Political activity must truly be conducted at the service of the human person, with respect for creation and for the common good” will surely guide my future activities.