Half of workers are non-regular employees under low working conditions
The situation of workers in Japan is quite complex, but the biggest issue at present is the current situation of non-regular workers, that is to say, the employment system itself. In the 1990s about 20% of all employees in Japan were non-regular workers. In 1995 the employers’ association Nikkeiren reported that Japanese management had entered a new era challenging future forms of employment.

Workers can be divided three categories: (1) conventional long-term regular employees, (2) highly specialized workers, and (3) non-regular type of workers recommended for employment by the companies. In fact, the number of non-regular workers has increased to the point of forming nearly 40% of the overall working population, and in the case of women workers, where regularly employed women are less visible, the proportion of non-regular workers has greatly increased to more than 50% of all women employees. 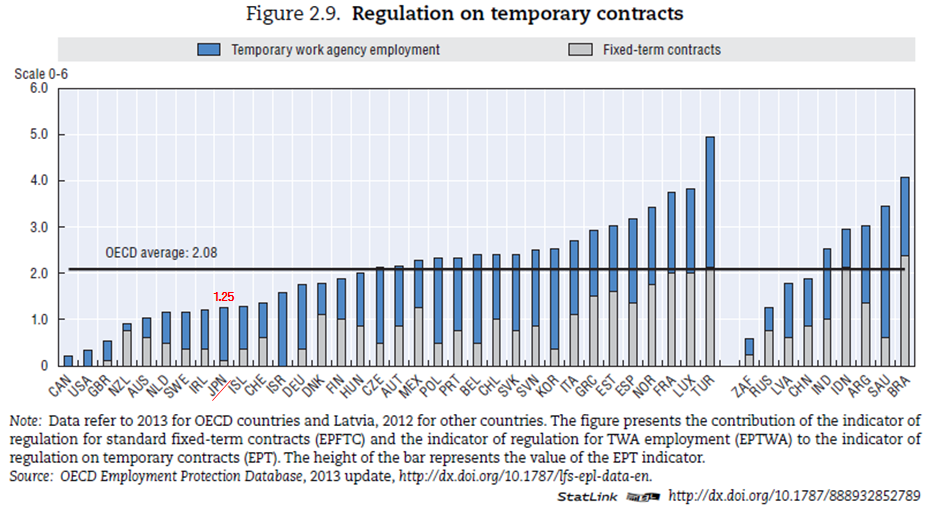 Many non-regular workers earn below 2 million yen a year, with short-term employment. Many suffer hardships regarding expenses for their children’s education, suppress childbirth, or become dependent on their family. Even for young people who graduate from school, there are few opportunities open for regular recruits but there are many short-term employment offers for part-time positions and dispatch of labor, with the result that workers cannot acquire the skills needed for lifelong work. Simple labor is unstable and repetitious, and young people are thus thrust into situations where they are unable to marry.

Companies are making use of non-regular workers as employment adjustment valves that make it easy for them to stop hiring people as the economy worsens and thereby cut personnel expenses without increasing wages, as would be the case with full-time employees. Nevertheless, for the workers themselves, such an employment system only makes their daily life more difficult and their future less promising.

The minimum wage of Japanese workers is determined by each prefecture, but they continue to maintain low wages for non-regular workers. Likewise, the minimum guaranteed pension and the daily payment of welfare public assistance are kept at such a low level as not to cover daily expenses.

The situation of regular workers continues to worsen. Large corporations have created new wage systems that hold down the rate of wage increase for new recruits. They have also created a gap vis-à-vis the salaries of regular employees. They require a high labor goal achievement from regular employees, reducing at the same time the number of full-timers. As a result, in order to achieve the required high goals, overtime work is required. Such a labor situation can result in death from overwork. It is like squeezing a wet towel. The number of deaths from overwork and workers committing suicide will continue to increase. In many instances, however, there is no evidence proving death from overwork, and it is not recognized as a work-related factor.

Pope John XXIII’s encyclical Pacem in Terris (1963) commemorated the 72nd anniversary of Pope Leo XIII’s Rerum Novarum, which is considered to be “the workers’ charter.” In his encyclical, Pope John states that “workers have a right, by justice, to receive a fixed remuneration which allows them and their families to maintain a standard of life suitable to their human dignity.” In 1995, 32 years after Pope John’s encyclical, Japanese business adopted a policy destroying workers’ families by officially supporting the increase of non-regular workers. Moreover, legislation protecting workers has become continually more lenient.

After the war, Japanese businesses, learning from American management policies, began their “productivity improvement” movement. As profits rise, they maintained, workers will benefit from larger pieces of the economic pie, so workers were asked to cooperate, and labor union officers used their position to blatantly become company management members. Thus the unions were converted into company organizations officially backed by management. Productivity has increased, but apportioning of the economic pie has not been sufficient. The next step was the change in employment practices, a serious criminal act against humanity. However, it cannot be said that this alone bears all responsibility. Creation of new families and childbirth have also been hindered and the population has decreased. We cannot but say that these brought about a drastic decrease in the labor force as a result of profit supremacy and worker abuses.

While the aim of big business is to make regular workers and employees overwork, what are the “working reforms” of the Abe Cabinet?
Last autumn the Abe Cabinet submitted to the extraordinary Diet a “Bill for Working Reform” (consisting of 8 revised bills that will change future ways of labor such as the revision of the Labor Standards Law, revision of the Worker Dispatch Law, and amendment of the Labor Contract Law). Their plan was to implement “working reforms.” With the dissolving of the national assembly and the recent general election, the submission of the bill was postponed till the ordinary session of the Diet at the beginning of 2018.

The main bills aim first of all to revise the Labor Standards Act so as to create a system that removes some professionals with high income from work-time regulations (referred to as an “advanced professional system”). Furthermore, it aims at revising the law to clarify the upper limit of overtime work by imposing penalties. Additionally, it aims at revising the Labor Contract Law so as to eliminate the difference between regular and non-regular employees, aiming at having “the same wage for the same work.”

Why has such legislation been proposed? A “zero overtime system” was proposed to the government by executives of the Economic Association in 2014, and the government aimed at establishing an “Advanced Professional System Bill” together with an expansion of the discretionary labor system in the Diet, but many labor unions, the Democratic Party, the Communist Party, and the Social Democratic Party strongly opposed it, calling it a “Zero Payment for Overtime Bill.” They claimed it was a system to promote death from overwork. Diet deliberation was impeded and led to the strategy to curtail the discussions and approve the bill as a “working method reform package bill” along with other bills.

In March 2017, Prime Minister Abe was designated “Chairperson of the Working Reform Conference” for the ministerial and experts level council. Their basic stand is “that of the viewpoint of a worker … to enable each worker to build a better future, to improve the treatment of irregular workers by fixing the norm of ‘same wages for same work,’ to raise wages and labor productivity, to introduce ceilings on long hours of work and overtime labor with penalties for non-observance, to improve working conditions favorable for women and youth to receive training so as to be able to work actively, to combine work with child and nursing care and to work with the disabled, to accept foreign workers,” etc. In a certain sense, all such goals include the disadvantaged so that a 10-year roadmap has been outlined.

Although the Abe Cabinet is good at launching signboard policies such as “human-enhancing revolution,” the results of the contents of “working reform” exert an oppressive influence on the future daily life of workers. One should not be tricked by gentle-sounding words and kindly expressions of fantasy as if policy-makers are taking the side of workers. I feel that, as thoughtful people, we must incisively examine and monitor the issues involved in order to be able to cope with them.

Even if death from overwork occurs, can long labor hours be legalized?
Dentsū’s newly-hired Ms Takahashi Matsuri committed suicide due to overwork. It was also reported recently that an NHK journalist died from overwork. Death from overwork (karōshi) and the problem of long work hours leading to death and suicide has gathered public attention. Public opinion polls show that extra work hours should be brought to a limit. However, is not the government intending to legalize an upper limit of long-term labor hours through legislation?

According to the Labor Standards Act, the current working hours are limited to 8 hours a day and 40 hours a week, but if the new bill explained above is passed concerning the conclusion of agreements between labor and management, overtime work will become possible and an official notice from the Labor and Welfare Minister will allow as a limited standard 15 hours a week, 45 hours per month, and 360 hours a year. There are no penalties involved and, given special circumstances, unlimited overtime is permitted, provided that an agreement is signed with a special clause allowing unlimited overtime hours.

There is great opposition to such legal standards from all sides in society. For instance, lawyer Imamura Kōjirō, one of many opponents to the new bill, criticized the government: “Is it not strange to tolerate overtime work up to 100 hours a month, even if a person dies? It is unreasonable not to recognize the danger of death due to overwork.” (Akahata, 2017/4/28)

“The highly professional system” is explained as a “personal agreement to an annual income of 10,750,000 yen or more.” This answers the wish of big business to lower the annual income and expand the kinds of occupations, and there is a great possibility that the government will reform its present official policies. Thus, the number of full-time employees that cannot demand overtime work payment will greatly increase. But, if the number of “high-pro” applicants and discretionary labor-designated workers increase, that will inevitably bring about an increase of work abuse to regular employees.

“Same wages for the same work” looks nice at first sight. However, the government plan with respect to basic salaries and bonuses recognizes differences in companies’ payment to workers according to their contributions in their work, their capacity to make business judgements, and their success. There remain many ambiguities in the use of the catchword “same wages for the same work,” with no guarantee of its implementation for all workers regardless of their nationality, age, gender, and whether they are regular or non-regular.

It cannot be said that the government’s “working reforms” will not create even greater discrimination among workers. Since the government is proclaiming “productivity improvement,” all workers need to fight together for their legitimate right to work for an adequate human life and appropriate human working conditions.