―Following up on the Korea-Japan Social Apostolate Meeting―

There is no end to divisions and armed conflicts in our world. As long as we continue to differ from one another, we unconsciously draw a line between “us” and “the others.” Nationality, gender, social status, and language form various boundary lines, with the result that from time to time we experience such great pain, suffering, and hate that we are unable on our own to bridge the mutual chasms that have been created. The biggest chasms we can imagine result from wars. Even now we cannot fill up those chasms and the resulting wounds have not been healed. 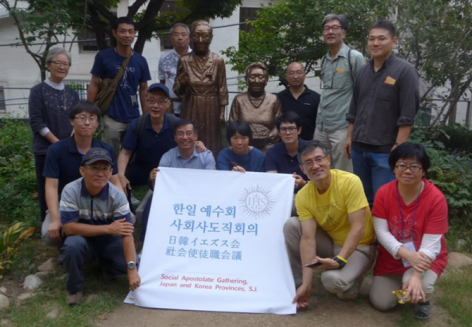 Last summer, during the mass media turmoil over the launching of missiles by North Korea, I attended a workshop on the Jesuit social apostolate for the Provinces of Korea and Japan held in a Jesuit center in Seoul (Korea) from September 4 to 6.

On the first day we heard three lectures: on “Northeast Asia security issues and peace,” “Peace and human rights,” and “The lives of women in villages adjoining military bases and national responsibility.”

The first talk on peace and security in Northeast Asia focused on missile defense (MD) and the need to equip South Korea with a medium range missile system (THAAD) to defend itself. From the information I obtained I learned that, no matter what sort of missile defense system is set up, there is no clear guarantee of being protected. US intentions behind the THAAD system and concern for worsening relationships with China show that we cannot coexist with the THAAD system. I felt again that peace based on such military force will only lead to greater chasms between nations.

In this context, relationships with North Korea should not be based on military force but on a wise coexistence that searches for possible new approaches. I reflected on various aspects, like people’s fear arising from the launching of missiles by North Korea and the excessive overreaction of the mass media. Moreover, in the same way that we feel afraid, North Korea has also lived for more than 70 years under fear of the US military. The result is that North Korea has been commonly treated as an evil society.

However, I feel that, behind all this, it is important to fear dominant motives that remain hidden to us and torture our conscience if we pretend not to see the realities we are faced with.

We also heard about the issue of military “comfort women” from activists working on solutions to this issue, which has been kept buried and removed from public attention for the last 50 years. It has been a history of suffering and shame for the victims, a heavy burden imposed on the women who continue to bear it without being able to speak publicly. There is a chasm even now between those who bear unhealed wounds and those who are suffering from them but do not admit it. On August 14, 1991, a military “comfort woman” held a public press conference exposing the situation of the victims. In doing so, she appeared totally liberated. After that, more victims rose up and took new initiatives, moving from being victim to becoming activists.

The military “comfort women” system basically damages human relationships by its deceptions. During the war, under the invitation to work for the Japanese government, women manifested their will to go abroad to support their families. But what was waiting for them there was to become sex slaves. Since the apologies given by Japan have been ambiguous and do not show what the issue really is, the women continue their appeals through public demonstrations. Later, at a meeting of Foreign Ministers of Korea and Japan on December 28, 2015, the chasm became even wider between both countries over the issue of removing the Korean-made statue of a girl symbolizing the military “comfort women.”

In the talk on “the life of the women living in the villages adjoining military bases and the country’s responsibility,” we heard about the situation of women in a brothel managed by the Korean government close to the American military base. The women were forced to take drugs and become victims of sexual assault. The government as well as the police were involved through tacit consent, and an organized system prevented women from escaping. People in the area thought it was evil but closed their eyes to the facts. I felt dismay at heart and, while listening once and again to the same stories. I noticed the wounded faces of the victims who seemed to feel that “nothing can be done” about the situation.

We spent the second day visiting the Demilitarized Zone (DMZ). I found it a significant experience to stand at the border line of North and South Korea. For the first time in my life I was able to look through a telescope at North Korea, which to me had been a faraway country I could only see on the TV news and of which I had an image created by the stories I had heard. Looking through the telescope, I wondered: What is daily life of the people over there really like? What do North Koreans have at heart concerning their own country and foreign countries? In front of me was a large expanse of green grass. The artificial barrier seemed useless and I felt there was really no natural border line. Recalling the talks of the first day, I saw in that border line a possibility of reconciliation between the two countries, but at the same time I felt that if the wrong decisions were taken, it could also result in mutual destruction.

We made a tour of the tunnels North Korea dug inside South Korea. We entered the number 3 tunnel, 73 meters below the surface. It was 1635 meters long, 2.1 meters wide, and 1.65 meters high. Here again I felt a human chasm created by the idea of secretly digging holes to invade South Korea.
In the evening, we paid a visit to the War and Women’s Rights Museum, where we saw written testimonies of military “comfort women.” By meeting with some of the victims there, we were able to deepen our understanding of the issues we heard about in the lectures on the first day. 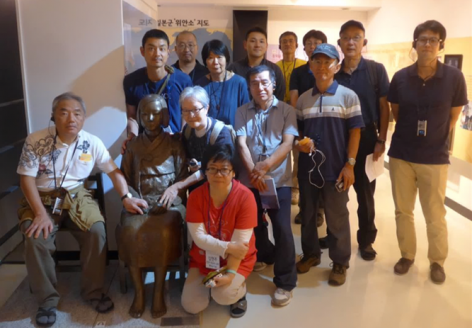 The third day was dedicated to planning concrete steps toward a Korean-Japanese network. In that day’s lecture we heard about international solidarity steps in the history of South Korea, what solidarity means, what the objectives are, and what concrete shape of action can be taken. We reflected on “solidarity” within the framework of those questions. We also considered possibilities of working for peace and reconciliation across national boundaries.

The afternoon was dedicated to group discussions on mutual Japan-Korea relationships, reflections on the three-day workshop and on how to follow up with concrete action plans. Finally, after promising to report on the workshop in each participating country, the meeting closed.

As I already mentioned at the beginning, the word “border line” kept echoing in my mind but it soon disappeared. Humans create chasms by drawing border lines between persons, and those artificial lines provide reasons and situations for aggravating divisions and impeding moves toward peace. Observing closely the relationships between Koreans and Japanese, North and South Koreans, men and women, victims and criminals, I will always be a Japanese male standing on the side of the criminals as far as Koreans and those active on issues of military “comfort women” are concerned. As a result, it would be totally irresponsible of me to pretend not to see the chasm created by war or to forget it as if that had never happened.

So what can we do? How can we fill the chasms that have been created? My opinion is that these chasms cannot be filled in by personal effort alone. Of course, personal efforts are needed, but people should not create further chasms by denying mutual differences. On the other hand, if they accept these differences constructively, natural human relationships can be born and the chasms already existing will vanish, thanks to a wholesome natural relationship among human persons. On the contrary, if we try to fill up the chasms by personal efforts alone, I think this will only deny their existence, hide them, or forget about them.

That is not the right way. It is tough and painful to recognize one’s weaknesses candidly and to ask for forgiveness, but when there is forgiveness in spite of the painful wounds endured, there is a possibility for mutual relationships. People will be able to dialogue with each other on the same level, and there will be a possibility for making peace a reality through forgiveness and healing. Most probably, God is lending us a helping hand to free us from the tendency to run away or turn aside. I think that initiating responsible action is the first step to obtaining peace.