The Absence of Japanese Policy on Migration and Refugee Assistance

On the World Day for Refugees (June 20, 2017), the General Secretary of the United Nations, Mr. Guterres, sent the following message: “According to the newest data of UNHCR 65 million of the world’s population, meaning about 1 out of every 113 people, are forced to take refuge inside their own country or abroad. Syria is the country that creates the largest number of refugees and South Sudan, with a fast increase of new refugees, is rapidly facing a challenging situation of 1,400,000 refugees plus 1,900,000 internally displaced persons. … Behind such huge numbers lie stories of the struggles of each one of them, the hardships displaced persons bear, family separations, loss of assets, danger to their lives along their journey looking for security, etc., all of which remains unknown. At present, 84% of world refugees are hosted in low and middle income countries. We cannot continue imposing such responsibility on small countries, many of which include the poorest in the world.” [This is a private English translation of the UN General Secretary’s statement on June 20, 2017]

On the occasion of the celebration this year of the 500th anniversary of the Reformation, Catholic and Protestant Churches made the following Joint Ecumenical Statement for World Refugee Day 2017. 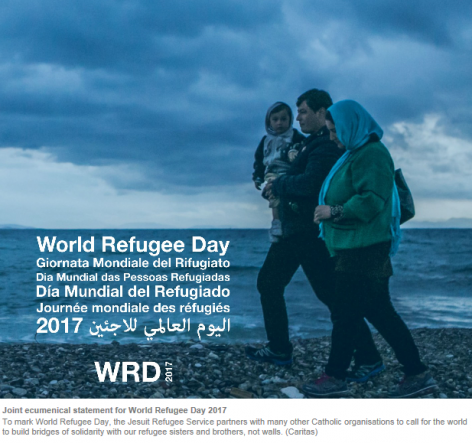 “Wealthy countries cannot evade their responsibility for the wounds inflicted on our planet — environmental disasters, the arms trade, developmental inequality — that drive forced migration and human trafficking. While it is true that the arrival of migrants in more developed countries can present real and significant challenges, it can also be an opportunity for openness and change. Pope Francis poses this question to us: ‘How can we experience these changes not as obstacles to genuine development, but rather as opportunities for genuine human, social and spiritual growth?’ Societies that find the courage and the vision to go beyond the fear of foreigners and migrants soon discover the riches that migrants bring with them, and always have. If we, as a human family, insist on only ever seeing refugees as a burden, we deprive ourselves of the opportunities for solidarity that are also always opportunities for mutual learning, mutual enrichment, and mutual growth. … Sharing with others what we have and own, we discover that all is given freely by God. At the same time, in welcoming those whom we encounter, we meet the God who is always already present with the vulnerable, at the peripheries, and in the other.” (JRS, Joint Ecumenical Statement for World Refugee Day 2017)

Reacting to such situations, the Japanese government has decided to accept a limited number of 150 Syrian students in a space of 5 years, beginning this year 2017. And as a test, the Japan Association for Refugees (JAR) in collaboration with Japanese language schools, provides opportunities for Syrian students to enter legally into Japan. Financially speaking, Japan helps to save many lives by its yearly contributions of 20 and 30 billion yen to the UNHCR.

Applicants for refugee status in Japan have greatly increased to 10,901 cases in 2016 from 1,202 in the year 2010. Nevertheless, this is quite at variance with the huge increase of refugees in Europe as a result of the Syrian war and other military conflicts. Japan’s increase in refugee applicants is rather the result of a lack of refugee policy.

The main reasons for the rapid increase of refugee applications in Japan are:

Within such a defective lack of refugee policy, assistance to refugees must be reconsidered. It can also be said that this is related to a negative social awareness toward accepting foreigners.

In 2016 Japan recognized 28 refugees: 7 from Afghanistan, 4 from Ethiopia, 3 from Eritrea, 2 from Bangladesh, etc. Because of humanitarian reasons, 97 persons were given residential stay visas. Most were from the Ukraine, Iraq, Turkey, Pakistan, and Sri Lanka. In all, 125 of the applicants that year were allowed to live in Japan. In the year 2015, 3 Syrians were recognized as refugees and 6 more were permitted to remain in Japan. No Syrians were included in 2016.

There are various ways to improve the Japanese refugee policy. First, permission to stay in Japan because of humanitarian reasons does not provide any opportunity to attend Japanese lessons and causes many inconveniencies. Moreover, there is need to ease and clarify the criteria for refugee acceptance. If Japan could welcome new refugees, like those fleeing from war situations, the number of applicants for refugee status would show an increase. In fact, there are cases where the Court has revoked administrative decisions regarding the denial of refugee status.

Additionally, a more active use of the system to place people in a third country is also needed. Beginning in 2010, Japan started to receive a maximum number of 30 Myanmar refugees a year who were living in camps in Thailand, and 86 members of 18 families entered Japan until 2015. From 2015 on, the focus has changed to Myanmar refugees living in Malaysia and, as a result, 18 members of 7 families entered Japan. Thus, a maximum of 50 more refugees could still be received. The mass media do not report on all this. In the case that Japan could accept Syrians, Rohingya, and ethnic Kachin refugees opposed to military oppression and unable to travel to Japan, the system of accepting refugees in order to move to a third country would be activated.

Civil groups like the NPO Forum for Refugees Japan: FRJ try to improve little by little the refugee situation by looking for possible actions to take. For instance, Ishikawa Mieko of FRJ, in a book published by Akashi Publishing Company, outlines activities of the Forum for Refugees in assisting refugees at the civil level. FRJ in collaboration with UNHCR organized a network of 18 groups assisting refugees. The main activities of the network are: 1. Discussion and proposals on policy, 2. Running shelters and offering alternative measures to detention, 3. Holding national and international network gatherings. 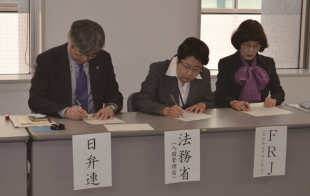 Back in 2012, FRJ drew up a memorandum with the Immigration Bureau and the Japan Federation of Bar Associations. In the 3-member discussion it was agreed to continue discussions on how to practically improve the refugee situation. Based on that, the project “Alternative to Detention (ATD)” was legally started for “migrants” (including applicants for refugee status who are formalizing their residential status at the immigration bureau). This allows those migrants to stay out of detention and allows them to take care of their health and continue welfare assistance. In addition, if on arriving at the airport a person demands refugee protection, a pilot project begun in 2011 has afforded protection for 12 persons. Besides that, since 2014, 14 persons have received living facilities.

With regard to welfare assistance for emergencies and places to provide assistance, discussions have been held with the Ministry of Foreign Affairs since 2009. In order to assist applicants for refugee status who do not have health insurance, the Maria Medical Support Foundation was established in November 2013. Since then, 818 applicants have been received. The money spent for medical assistance has already totaled 10,990,590 yen.

The Forum for Refugees continues to search for what can be done and how to improve its services to assist refugees in Japan and applicants for refugee status. 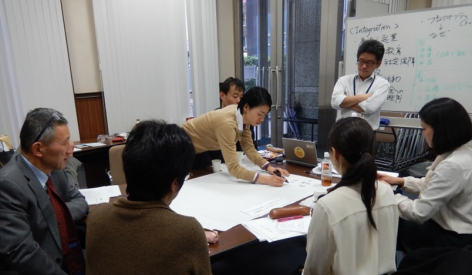