――From May 29 to June 3 of this year “the 4th Christian Forum for Reconciliation in Northeast Asia” was held at Jeju Island, in South Korea. About 80 Christians from Korea, Japan, China, Hong Kong, Taiwan, and the United States of America gathered in an ecumenical spirit to pray and to learn about reconciliation. On May 31, under the leadership of Bishop Kang Woo-il of the Jeju Diocese, the participants made a study tour (pilgrimage) of the island to observe the opposition movement that has been carried out for several years by the Gangjeong villagers against the new military navy base and the Memorial Hall in commemoration of the April 3 Incident. (See Bulletin no.185)
On April 3, 1948, amid American military rule in South Korea, an armed uprising occurred on Jeju Island calling for independence and the unification of North and South Korea. To suppress this uprising, right wing youth groups, the police, and the military initiated a repression and cleansing with a massacre involving all the islanders. It is believed that tens of thousands of people were killed at the time. The Memorial Hall was built to commemorate the victims of the uprising.
The author of this article, Protestant Minister Kim Shinya, is a third-generation Korean living in Japan. The article is a living “testimony” of the April 3 Incident as experienced by his father. (Yanagawa)

1. About my father
My father was born in 1934 and it’s been 17 years since he passed away. I have to confess that I wasn’t a good son for him. Like many sons, I too was rebellious against my father when I was young. Because of my critical lack of sensibility for concrete historical facts and lack of experience of compassion for human beings, I did not listen seriously to the things he told me. Now I regret it. Today I am going to be a witness for a witness. I shall try my best to remember what my father occasionally told me while he was alive. 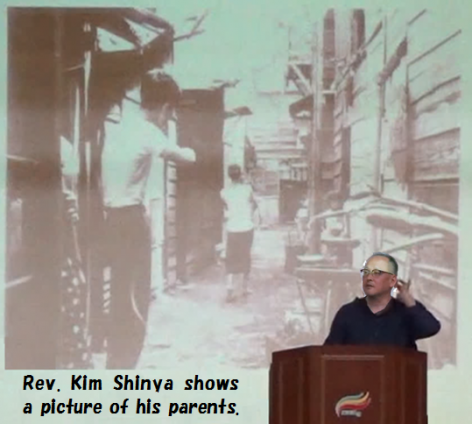 2. A militarist boy and the Liberation
My father was born in Japan as a second-generation Korean. When my father was in primary school, Korea was a colony of Imperial Japan and, along with all Koreans, he had to become a Japanese citizen and live as a Japanese citizen. He told me that he had good grades at school. So one day his teacher recommended him to become the class leader and he was happy about that. However, one influential figure in the village strongly opposed this, insisting that it was not appropriate for a Korean child, who was from a colony, to lead children of the “ruling” country. So my father had to give up becoming the class leader. Ironically, after this incident my father became more and more “patriotic” and showed strong loyalty toward the Emperor of Japan in order to advance his position inside the hierarchy of the imperialist state.

Soon afterward, Japan lost the war and all Koreans including my father and grandfather were liberated. Most Japanese who had been loyal to the Emperor were totally devastated to see the collapse of the Japanese Empire. It was the same with my father. But my grandfather was different. My grandfather was also a “patriotic Japanese citizen” during the war. But when he heard the news of Japan’s surrender on the radio, he started running around the village shouting “mansei!” When my father saw this, he immediately thought his father was hikokumin or unpatriotic.

3. A certain prayer
Right after the Liberation, my father’s family returned by ship from Osaka to their hometown on Jeju Island. It was 1945 or 1946. Unfortunately, the ship was almost lost during a storm, and I heard that my father was very scared. In a sort of panicking chaos, he saw some strange scenes on the ship. In one of these, people were throwing their luggage out onto the sea, but there was a woman praying frantically. That was my grandmother, who I hear was a Catholic. My father told me he thought his mother must be crazy. What use was it to pray in such a situation? With his imperialistic elitist mentality at that time, he despised her greatly for her ignorance. However, when the April 3 Jeju uprising and massacre occurred, my father and my grandfather had to escape from Jeju Island, leaving my grandmother and a three-year-old younger brother there. My grandfather seems to have been a socialist, since he was engaged in the uprising movement. My father never saw his mother again after that. One day I saw tears flowing from my father’s eyes while he was telling me this. Maybe he was thinking about his mother.

4. On the soil of Jeju Island
Although my father grew up as a Japanese imperialist or militarist boy, he confessed that his strong imperialist mind “melted” down, as it were, and he started feeling affection for his homeland. He said the soil of Jeju changed him. He said that, thanks to that soil, he regained that certain sense which ordinary people have—that love of the soil that nurtures not only beautiful trees and flowers of the island but also the cows, chickens, horses, and dogs. He said that, having to walk a long distance to school and pass through three villages, he made some friends soon after he “came back” to his fatherland. I vividly remember that he said he and his friends played jokes, spat, urinated, and sometimes stamped on the soil, and he felt as if the soil was watching over them with smiles and without scolding them. He also told me that every time he saw a flower blooming quietly, he was eager to kiss the soil underneath the flower which was nourshing the plant.

However, the story of the soil does not end there. He said that the soil of Jeju has changed. According to him, the facial expressions of the soil have changed enormously. Part of the soil in Jeju Island started wearing a heavy make-up of asphalt. He said that buried under that asphalt were at least 80 bodies of April 3 massacre victims. He showed me a copy of a Korean newspaper Dong-a Ilbo published in 1988 and told me about the asphalt that was now part of the Jeju airport runway. He said, “I still remember the feeling of the soil that I walked heavily on while going to school with my friends. I was sometimes eager to kiss it. But the soil I knew has changed. I don’t think I could walk on that asphalt now, because somehow it still bears the weight and thickness of past violence, violence that has not been yet revealed. This fact definitely has something to do with you and me now living in Tokyo, far away from the island. So if you have a chance to go to our homeland of Jeju, don’t go there by plane.” That was my father’s last will.

5. Uprising / Massacre / Incident
The reason my family were living in Japan is that my grandfather and my father were involved in the April 3 uprising and massacre. I can’t really tell whether they were also involved in the Sam-il demonstration in 1947, in the general strikes after the 1947 demonstration, or in the April 3 uprising itself, since my father didn’t talk much about these. However, I remember he talked about one incident he had been involved in.

He had joined a demonstration with his friends from junior high school (he was 13 or 14 years old at the time). They all sang together a song called “Bon Seon-hwa.” All of a sudden he heard some gunshots and just after that he noticed that the friend marching right next to him had been shot and was bleeding. My father’s clothes also had blood on them. He escaped and went back home. His father put him on board a little ship for Japan. He was in a very narrow cargo compartment and could hardly move. On the ship, he was ordered never to put his head out of the compartment. It took almost a week or so to get to Japan, and he had no choice but to fill all his needs in that compartment.

6. Troubled by a Dream
I remember that my father occasionally had nightmares. Sometimes I could hear him groaning from my room. When he woke up after having a nightmare, his face looked pale and he was soaking with sweat. For a long time I felt that this was just a natural “groaning.” I didn’t understand the reason why he had such nightmares or what kind of past memories lay behind them.

That all came to light when I decided to get married and told my father about my fiancée. When I told him that her father was originally from Pyongan-do in North Korea, his face suddenly turned pale. Then he slowly started talking about his suppressed stories. He revealed that people in Jeju from from Pyongan-do had taken part in the massacre of April 3 on the side of the oppressors.

Violence will divide persons from persons, families from families, and nations from nations. But God had prepared a reconciliation between my family and my wife’s family in a celebration that enabled both sides to accept the other family’s experiences—the tragedy of the April 3 massacre in Jeju as socialists, and the tragedy of the North Korean Christians who had to cross “the border” under oppression by the Communist regime when the Korean War broke out.

7. The Voice of the Voiceless
My father’s groaning was just a little groaning in itself. But it took almost 40 years for the voice behind that groaning to be heard by his son. Is this a special case? I don’t think so. His groaning represents the voice of the voiceless, and many other voices of the voiceless are still groaning and whimpering, waiting for the real voice to be heard behind these groanings and whimperings and someday they will change into a testimony. We still hear the groaning of the “Comfort Women” who have already left this world, the groaning of those who lie buried under the hard asphalt of the Jeju Airport runway, and the groaning of the soil of Gangjeong Village, called Gurombi, which was destroyed and cannot be seen now. 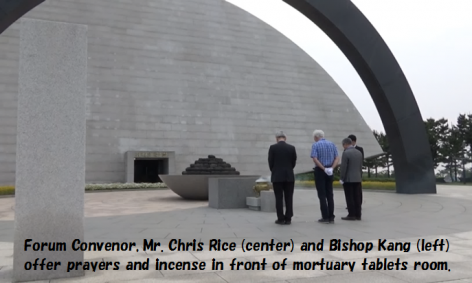