Reconciliation and Justice in the Management of Natural Resources

Cardinal Charles Bo of Myanmar closed his welcoming address with the following encouraging words: “Think big and never give up. The world needs you, my dear Jesuit companions!” The recent Asia Pacific Social Apostolate Conference took place in Yangon, Myanmar. I was happy to be participating again for the first time in 7 years. “You Jesuits are people ready to think big,” the Cardinal vigorously repeated. He lifted up our spirits. Nevertheless, reflecting on my brief and narrow vision, I took his words as a warning to me. 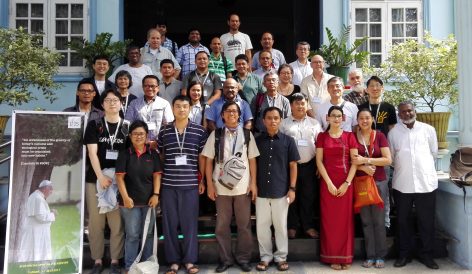 The theme of the Conference was “Laudato Si’—Reconciliation and Justice in the Management of Natural Resources.” I had not previously realized how serious the situation is! Myanmar is rich in natural resources. If these were properly distributed and used, there would be no reason to find children living in such terrible condition in the streets of Yangon. Nevertheless, Myanmar, as well as many countries in Southeast Asia, has a history of colonization by large countries and, even after enjoying independence, colonial exploitation by foreign capital and powerful people continue to oppress the people. Profits never reach the poor. The Cardinal added, “Jade, the main source of our national income, will have been totally excavated in 10 years. The only thing left will be mountains changed into desert.”

“This is terrorism,” he continued, “ecological terrorism! A few powerful people in the world decide who will die and who will remain alive. Did Christ die for that? Is this what we understand by salvation, by the joy of the Gospel? We fight ISIS terrorists but are not aware of other terrorists, like economic and environmental terrorists! They harm the poor and the unborn children of the next generations as much as they please.” The cry of the Cardinal overlaps with the statement of Bishop Kang of Jeju Island, Korea. We hear cries for Justice and Peace from wounded places of the world.

We divided into groups to share our opinions. Our group consisted of China, Korea, and Japan from Northeast Asia. On the third day, dedicated to field work, we paid a visit to several ecological groups. On display were paintings of 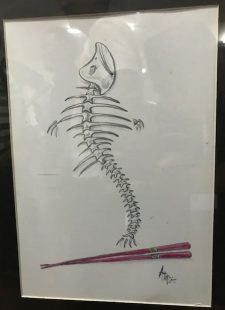 activists trying to create awareness of ecological justice through caricatures—for instance, the bones of fish without any meat left to eat on them and chopsticks placed on the table after finishing a meal. This was a sharp satire on the countries represented in our “chopsticks culture” group, China, Korea and Japan, which are exploiting natural resources. The word “perpetrator” leapt out at us in our discussion group. We confirmed our awareness that we are at present colonizing perpetrators.

Additionally, Koreans and Japanese mentioned nuclear issues several times. Koreans shared with us their hopes, mentioning that their new President, Moon Jae-in, has taken the lead in withdrawing from nuclear energy. The Japanese situation is embarrassing. Nevertheless, we confirmed our desire to deepen solidarity links with our Korean companions. This gave us increased hope and encouragement. We look forward to cooperation from China also. (There was only one Jesuit Chinese delegate.)

Reflecting on how to solve nuclear issues, I think what the Cardinal told us was very important: “Think big!” Within our Japanese context, nuclear power is the number one issue. But the basic message of Laudato Si’ is that ecological and poverty issues are indivisible. Myanmar is considered to be the second most vulnerable country in the world from the point of view of global warming. Human lives are destroyed there because of floods, earthquakes, and cyclones. Asia is responsible for such suffering. A basic solution begins from listening to the cries of the people, to victims of the next generations (ecological justice). It is through the practice of ecological conversion that a solution to nuclear plants can be achieved.

Upon listening to the messages of “Laudato Si’,” all the participant members to the Workshop wrote down their comments, in answering the following questions: What are you doing and plan to do at the Province level, at the community level and at the personal level? The words of Fr. Fernando, representative of the China Province touched deeply my heart. “How do the poor look at us? We should always consider this.” An important Jesuit mission is to become companions of the poor, to accompany them.

I hear that great quantities of lumber imported from Papua New Guinea are being used for the construction of facilities for the 2020 Tokyo Olympics. I was able to make friends and talk several times with Jesuit coworkers from Papua New Guinea. I try not to forget how they look at what Japan is doing in their country. Because of that, I do not want to put an end to our encounter in the workshop.

This meeting broadened our vision and provided inspiration and incentives. Liaison offices were set up in each Jesuit province to continue the activities of the network. I can still remember the photos of the trees being chopped and mountains converted to desserts. I feel I am standing in front of endless big problems. I must do something. Our strength is not great. Nevertheless, I was strongly convinced that this is also an offshore sea where I should go paddling.